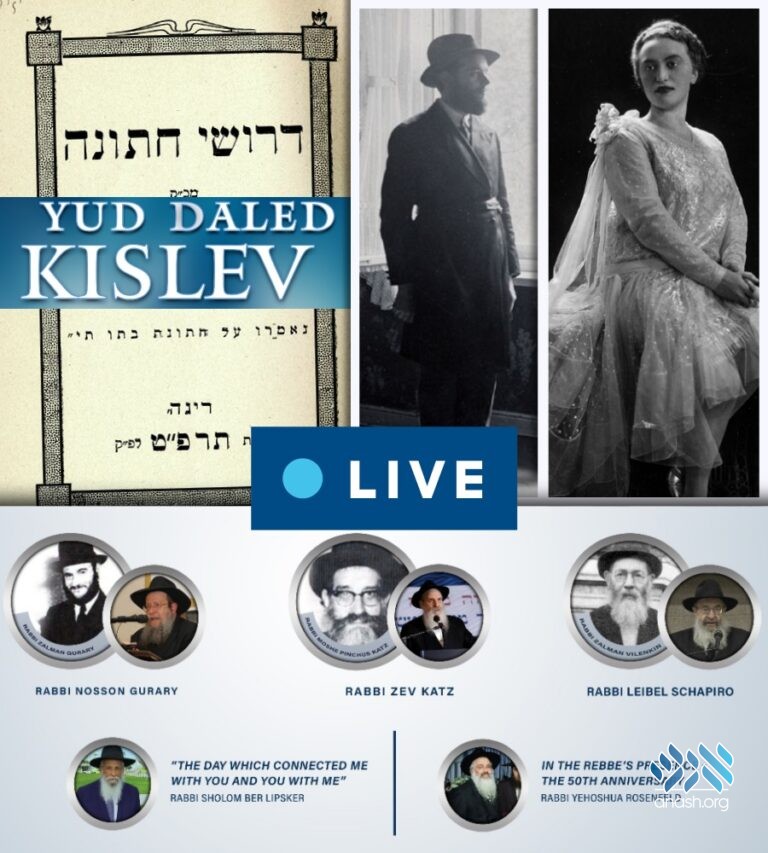 Join Live Now: The children of chassidim who attended the wedding of the Rebbe and Rebbetzin will be sharing their parent’s firsthand reports of the wedding, at a special live farbrengen hosted by Vaad Or Vechom.

“It’s the day that connected me with you and you with me.”

Those famous words uttered years ago by the Rebbe catapulted the day of yud daled kislev straight into the minds and hearts of us Chassidim, teaching us that this simchah was far more than a personal affair. And so, each year, anash, shluchim, and bochurim around the world gather together to farbreng and rejoice in this monumental day that manifestly bound the Rebbe and us together forever.

A prominent feature of many such farbrengens is the joy in recounting the events of the epic wedding that took place in Warsaw, 1927. Specifically held in the capital city with much aplomb, the Rebbe and Rebbetzin’s wedding was designed to be a grand affair to bring kavod to Lubavitch and the Friediker Rebbe. Indeed, anyone who was zoche to be present could never forgot a moment of it, relishing in telling over the majesty of that evening.

Times has passed, and firsthand accounts are obviously hard to come by almost 100 years later. To capture some of that special gefil that can only be had with vivid recollection, Vaad Or Vechom is proud to present The Wedding That Changed Everything: Eyewitness Reports. In this highly anticipated Zoom farbrengen, the audience will hear firsthand accounts from Rabbi Zalman Gurary (as told by his son, Rabbi Nosson Gurary), Rabbi Moshe Pinchus Katz (as told by his son, Rabbi Zev Katz), and Rabbi Zalman Vilenkin (as told by his grandson, Rabbi Leibel Schapiro) and relive the moment once again.

Following the firsthand accounts, Rabbi Sholom Ber Lipskier will speak on the topic of “The day that connected me with you and you with me.” Rabbi Yehoshua Rosenfeld will recount his memories of, “In the Rebbe’s Presence—The 50th Anniversary.”

The Zoom farbrengen will begin Wednesday, 14 Kislev, 9pm EST, and can be accessed at OrVechom.com/Zoom.