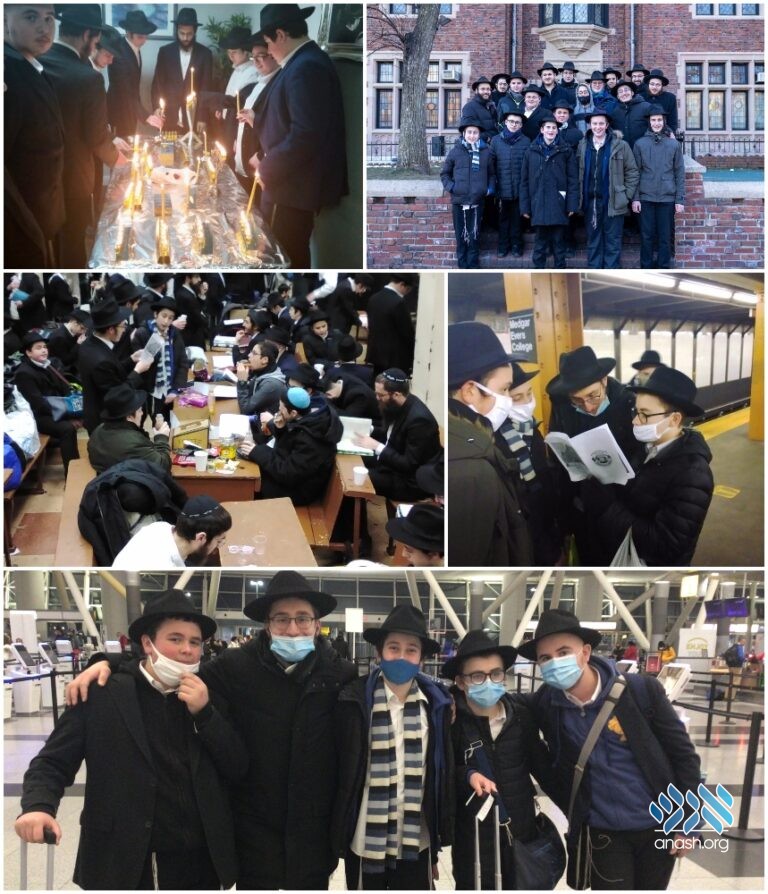 After the staff of CGI UK pulled off a successful Chanukah Shabbaton against all odds, they got the idea to arrange a trip to New York for Yud Shvat. It seemed impossible, but they didn’t let anything get in their way.

It all started a few weeks before Chanukah. Nobody thought it could happen – who would be able to host a Shabbaton in middle of Chanukah? and how would a group of staff learning in the US make it to the UK? considering tight COVID regulations – and all in a couple of weeks? But the CGI UK staff were determined to make it happen, and indeed it did.

4 staff members spent Tuesday through Sunday in London, spending a packed few days with the campers, including daily trips and mivtzoim, a Shabbaton in the countryside, and a camp reunion. The campers were treated to various farbrengens, and many lasting hachlatos were taken, ranging from saying Modeh Ani or wearing tzitzis, to learning Chitas daily or 120 minutes weekly (!) of Likkutei Sichos, in honor of the Rebbe’s upcoming 120th birthday.

Mere days after returning from their exhilarating and jam-packed trip to the UK, staff were already thinking about the next big step – Yud Shvat. One counselor receives a call from the head counselor, “Hey Mendel! I want to organize a Mivtza for the campers as a Hachana for Yud Shvat! What do you think?” “Sure! And let’s make the grand prize a ticket to the Rebbe!” They put their heads together and drew up the details of the mivtza.

The next day, an email was sent out to all the campers, notifying them of a Zoom meeting where their counselors introduced the Mivtza, and announced the reward for the winners – an opportunity to come to the Rebbe for Yud Shvat! The campers eagerly jumped on board, filling out duchs, completing missions, watching videos of the Rebbe, learning the maamar of Basi Legani, and more.

After 3 weeks of intense preparations, the Mivtza was completed with remarkable success, and all the campers watched with bated breath as the raffle was made… The winners were announced, and anticipation mounted for the upcoming trip.

As the day approached, a few more campers joined as well, and a total of 12 campers took off from England early Tuesday morning. Upon arrival at JFK, they were greeted by a royal escort and taken to Crown Heights, where they were introduced to ‘Mivtza Imdu’, a structure for the few days that they would be spending there.

They started their schedule with a tour of the Rebbe’s library, and then of the entire 770, by world-renowned tour guide Meir Shlomo Zaltzman. Then they ran to Oholei Torah for a quick farbrengen with Rabbi Berel Korf. They had the Zechus to daven Maariv on this special day in the Rebbe’s house, followed by supper and an impromptu Farbrengen with Rabbi Chaim Levi Goldstein. That night, they learned a sicha together in 770, then farbrenged with Rabbi Yisroel Shimon Kalmenson of Lahak Publications.

The next morning, Yud Shvat, the bochurim went to mikvah, learned Chassidus, davened and set off for the Ohel. Getting back to Crown Heights a few hours later, they davened mincha and went on Mivtzoim, to the Statue of Liberty. After some Shturemdike Mivtzoim, they got back onto the infamous NYC subways and made it back to 770 just in time for ‘the Hour with the Rebbe’ program, with all Chabad Yeshivos around the world in participation. They finished the night by visiting the worldwide Kinus Hatmimim, where they were treated to delicious chicken wraps with baby corn, and some inspiration from venerated Mashpiim.

On Thursday, Yud Alef Shvat, the campers Davened Shacharis in the Rebbe’s room, then toured various interesting sites throughout CH, including the offices of JEM, Maor Rebbe Videos, WLCC, and many more! They enjoyed a fun scavenger hunt along the way, with missions such as asking a Baal Teshuvah for his story in Hadar Hatorah, finding Mashpiim and asking for a vort/story, learning with a bochur in Oholei Torah, etc. They finished off the day with supper by the house of Rabbi Folly Dubov, CGI UK Mashpia.

Friday saw a day filled with mivtzoim in Manhattan’s streets, and a geshmake Shabbos meal and farbrengen at the house of the one and only Rabbi Shimmy Weinbaum! Lots of food, lots of inspiration, lots of hachlatos, and lots of baby corn.

After Shabbos, the boys packed their bags, and farbrenged till the wee hours of the morning, where more hachlatos were taken, and after last night’s inspiration with Rabbi Weinbaum, several campers undertook to learn 120 hours of the Rebbe’s Torah until Yud Alef Nissan. They then went for an early-morning mikvah dip, and stopped off at 770 and the Ohel before heading off to the airport to catch their 8 AM flight.

Baruch Hashem, we have been successful in keeping the camp spirit alive through Tishrei, Chanukah, Yud Shvat and year-round, and we can’t wait to continue through this upcoming summer back in camp!

You can kindly donate at yglshluchim.com/donate

Special thanks for the Chanukah program goes to:
Rabbi Odom Brandman and family for hosting the Shabbaton and helping set up the accommodations. Rabbi Lider for sponsoring the pizza by the melave malka. Big shoutout to Yechiel Wilhelm for all his help, including and not exclusively for the delicious food on Shabbos, the availability of Heichal Menachem for various events, and much more behind-the-scenes backup and support. Dudi Ashkenazi, Chaim Piekarski, Shachna Zirkind, Dov Werner, Yosef Zavdi, Mendel Goldstein, and all the devoticated CGI UK staff who tirelessly worked to help all the pieces fall into place to enable this to happen.

For the Yud Shvat program:
Thanks to Dudi Ashkenazi and Mendel Goldstein for arranging the Mivtza and trip, and to all the staff who participated and helped out throughout – Chaim Piekarski, Shachna Zirkind, Shmuly Golomb, Reuvain Brenenson and Yosef Zavdi. To the Golomb family, the Dubov family, the Goldstein family, the Weinbaum family, and the Wolf family, for hosting meals and farbrengens.

A big thank you to all of our sponsors – Mr. Philip Prefer, Mr. Robert Salem, and Mr. Dovid Gershowitz.