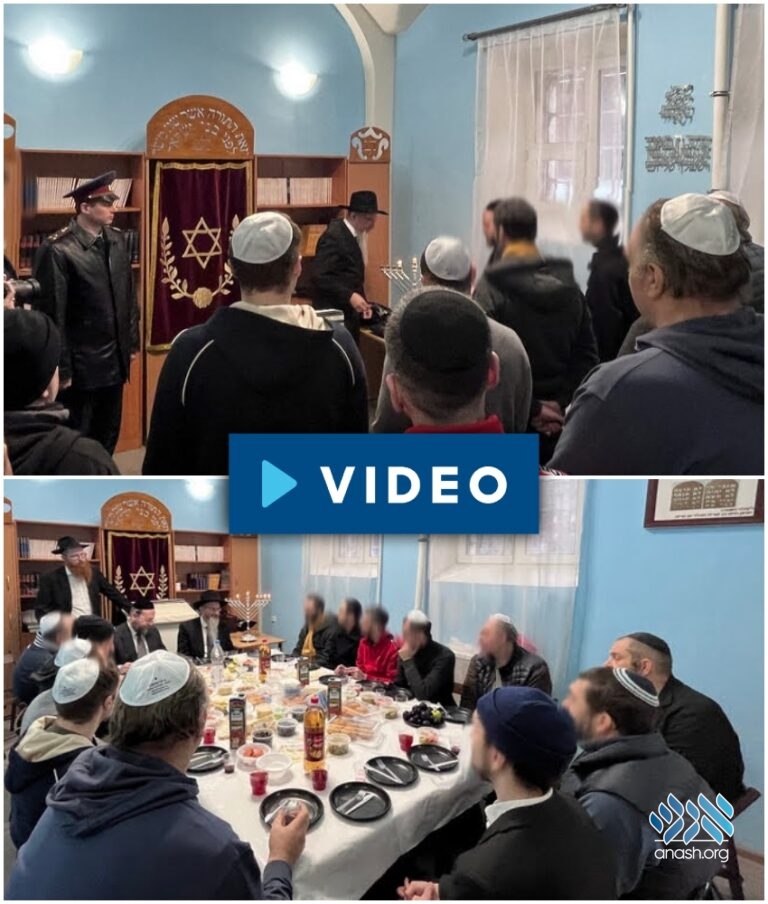 Chief Rabbi of Russia Berel Lazar lit Chanuka candles for inmates at Russia’s oldest prison, where many Chasidim had been incarcerated there for the crime of teaching Torah.

Most of the Jewish activities at the Butirsky Prison in the center of Moscow take place in the shul in one of the most guarded wings of the building. Dedicated volunteers come weekly to teach a Torah class, assist with Tefillin, and also make farbrengens on special dates, which help uplift the spirits of the Jewish prisoners.

In honor of Chanuka, Russia’s Chief Rabbi Berel Lazar came to attend the Chanuka party there. He was greeted by the prison’s administration, who expressed their appreciation for the spiritual work being done which has positive effects on the thousands of prisoners there. In attendance was also the prison’s Chaplain Rabbi Aharon Gurevitch, who presented before the prison’s directors a sample dedication plaque which will soon be put up in memory of the pure, unforgettable chassid Rabbi Mordechai Dubin a”h

Rabbi Dubin was a well known askan, president of Agudas Yisroel, and public figure in the Latvian government. He ably directed the Jewish Community in Latvia and was instrumental in obtaining freedom for the Frierdiker Rebbe. Rabbi Dubin was imprisoned for his mesirus nefesh, and he spent 3 years in this prison – which has been running actively for over 240 years!

At the appointed time, the officers accompanied the Chief Rabbi to the shul where more than a minyan of Jews was waiting. As he lit the chanuka candles, there were many emotions. After davening, and a Torah class, there was a warm and uplifting farbrengen.

Rabbi Alexander Zilberg and Rabbi Shlomo Dishko, who actively volunteer at the prison all year, presented each of the prisoners with a package containing a menorah, candles, and kosher food and sweets in honor of the holiday.

This was not the only prison that was visited. During Chanuka, another few Moscow jails were visited, as part of the varied activities and projects of Moscow’s Shaarei Tzedek Chessed Center which caters to the elderly, the needy and the indigent.