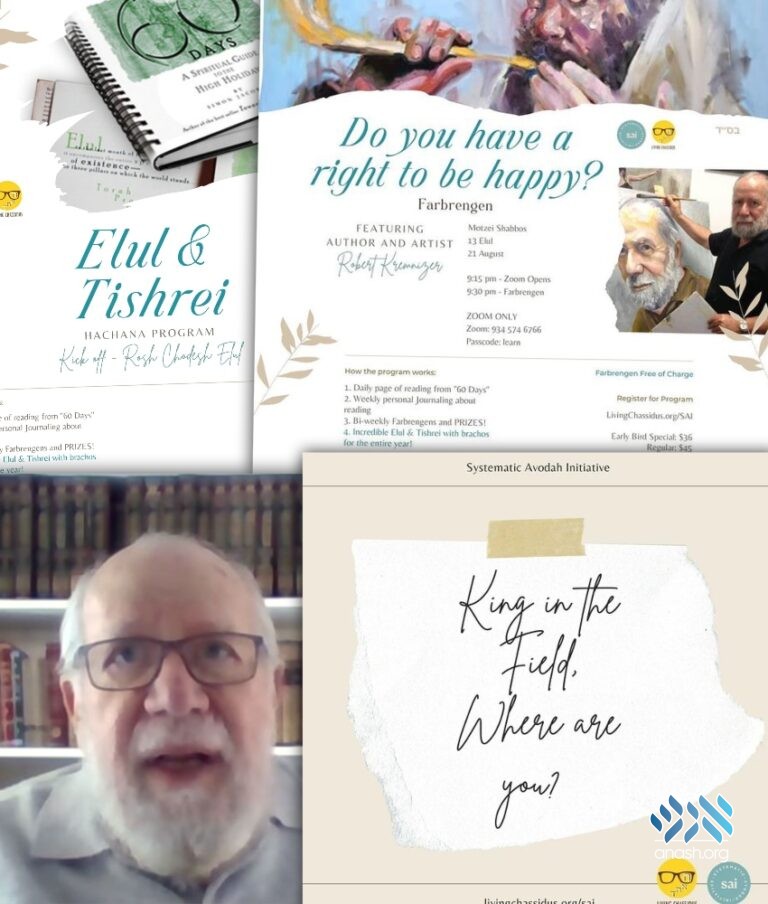 Dozens of Chabad Women are preparing for Tishrei with Living Chassidus’ Tishrei program. The first farbrengen of the program featured artist and author Robert Kremnizer speaking about bitachon and happiness.

Located in a cozy basement office space on the tree-lined street of Eastern Parkway, Living Chassidus is an organization dedicated to helping the young women of Crown Heights. Living Chassidus’ goal is to enable people to live with Chassidus by providing shiurim, lectures on life skills, and programs for yomim tovim. Living Chassidus also sets people up with shabbos meals, helps with shidduchim, and generally creates a caring community.

One of its most popular programs is the SAI Tishrei program, which is based on the Sixty Days book from Rabbi Simon Jacobson. SAI stands for Systematic Avodah Initiative and involves daily readings from Jacobson’s book, journaling, attending farbrengens, and earning incentives.

Living Chassidus prides itself on bringing in speakers who can energize their audience with relevant and inspiring messages. In past years, speakers have included Rabbi Simon Jacobson, Rabbi Shais Taub, Rabbi Yisroel Glick, Rabbi Ari Shishler, and Mrs. Goldie Plotkin.

People gain additional motivation from the prizes. In past years, participants have received jewelry, candle lighting accessories, and sefarim including “Inside Time” from Yanki Tauber, “Lessons in Likkutei Sichos”, “Tract on Prayer” from the Chassidus Heritage Series, “Light Points” and more. They have also gone on group outings to local restaurants and the Rebbe’s library.

Chaya M. has been a member of Living Chassidus since participating in an SAI Tishrei program four years ago. She says that the SAI program has impacted her life by helping her “harness these auspicious and powerful times for utmost introspection and growth”. When asked what her favorite part of the program is, she comments that the journaling aspect of the program helps her get more introspective and the prizes are motivating.

Living Chassidus strives to make its programs available to people who live out of town too. Participants can receive their supplies and prizes by mail and join farbrengens via Zoom. All of the recordings of the SAI events are posted for participants who are unable to attend in real-time.

The SAI Tishrei program for 5781-5782 has already begun. The first farbrengen of the program featured artist and author Robert Kremnizer speaking about bitachon and happiness. The first prize that participants earned for completing two weeks of the program were a copy of one of the speakers’ books, “Conversations with Zaidy”. Program participant Chana H. remarked about this program that “Elul usually just slips by but the program has made it so much more meaningful so far”.

Join the program at livingchassidus.org/sai