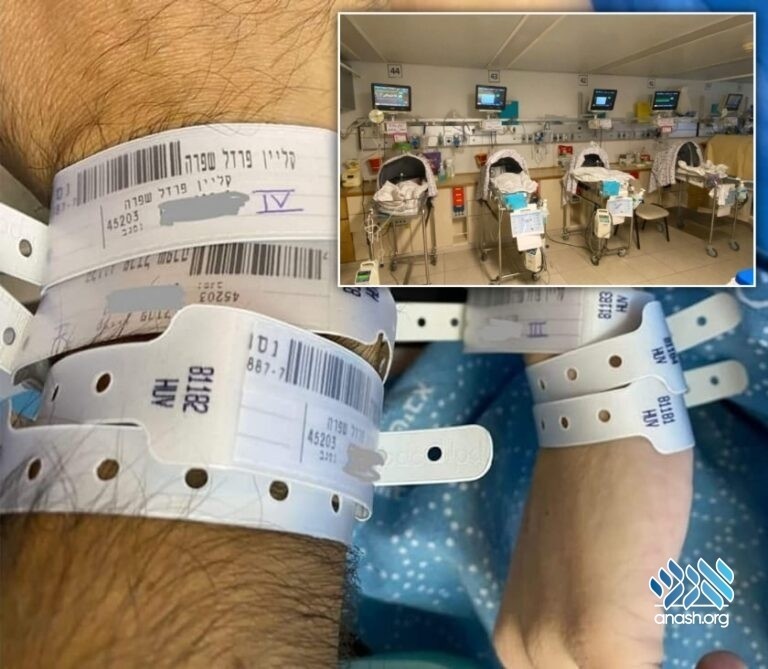 Mazal tov x4! Rabbi Boaz and Freidy Klein, shluchim to Bariloche, Argentina, had many reasons to celebrate after she gave birth to four healthy children. “I felt like I was a partner of Hashem four times in a row,” Rabbi Klein said.

Rabbi Boaz and Freidy Klein, shluchim to Bariloche, Argentina, had many reasons to celebrate after she gave birth to four healthy children, two boys and two girls, in Tel Hashomer hospital in Ramat Gan, Eretz Yisroel.

The incredible picture of the father’s wrist covered with no less than four hospital wristbands was shared by Israeli journalist Sivan Rahav Meir, who said it took her a few seconds to understand what she was seeing.

Rabbi Klein, who heads Chabad Lubavich Bariloche – Israeli Center, which is sometimes referred to as ‘the southernmost Chabad house in the world’, also shared a touching message of thanks to Hashem.

“In this weeks parsha, Yaakov Avinu says ‘kotonti mikol hachassdim’, and that is exactly how we feel,” he wrote.

“We have been shluchim for 14 years, and we never hid our struggles to have children. After all, three of our four imahos – Sara, Rivkah and Rochel were barren. It is not easy to be talk about these things in public, but we want to encourage other parents who are in a similar situation, and also publicize our private miracle.

Rabbi Klein, who together with his wife are also parents to an 11-year-old girl and a 3-year-old boy, said that when the doctors discovered his wife was expecting four, they were all shocked.

“For our first checkup, we went to a doctor, here in Eretz Yisroel. He happened to be a frum doctor, wearing a knitted yarmulka. As he was running the tests, he said: ‘Okay’. There was a second of silence and then he said: “One. Whoa… two. Very nice.” Suddenly his face changed, from a pleasant face to a serious one, as he continued to speak: “Wait, wait, three. Wait one second… four. This is not simple,” the father recalled in an interview with Israel’s Yedioth Achronot newspaper.

Despite some doctors’ pessimistic comments, the couple was confident that everything would work out fine.

And despite all the worries, the couple kept up a positive outlook, with Mrs. Klein, who had to be hospitalized for a number of weeks, taking on the role of a shlucha in the hospital.

“It was as if she transferred the Chabad house in Bariloche to her ward in Kiryat Gat. She was constantly encouraging all the other patients and even the staff. Her faith is contagious, and in a hospital, you need a lot of faith,” her husband said, adding that they both “felt the brachos of the Rebbe throughout the entire time.”

A number of weeks ago, on 20 Tishrei, the four children were born, a girl, two boys and then another girl. The girls were named Channa Liba and Rivkah Malka, one son, who just had his bris, was named Yosef Yitzchok, and the fourth son still needs to grow a little before receiving his bris.

“I felt like I was a partner of Hashem four times in a row,” Rabbi Klein said emotionally. “I really felt kotonti…”