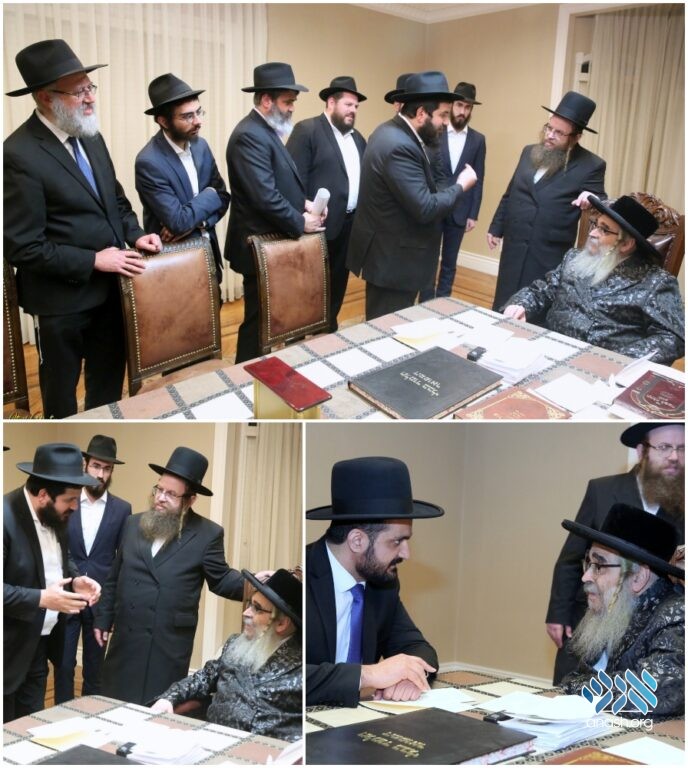 The Satmar Rebbe welcomed Iranian Chief Rabbi Yehuda Gerami and Rabbi Mendy Kotlarsky into his home on Sunday, where they discussed the effort of the Chief Rabbi to educate Iranian Jewry in Torah.

The town of Kiryas Joel, New York, was host to an unusual sight on Monday night, when the Chief Rabbi of Iran arrived for a meeting with the Satmar Rebbe, Rabbi Aaron Teitelbaum.

The Satmar Rebbe received the delegation, composed of the Chief Rabbi of Iran and member of the Union of Rabbis in Islamic Countries Rabbi Yehuda Gerami, along with Rabbi Mendy Kotlarsky, Director of Merkos Suite 302, Rabbi Danny Yiftach from Los Angeles and Rabbi Pesach Burston, Shliach in Orange County, New York. They were received with great honor, welcomed into the Satmar Rebbe’s private chambers.

The Satmar Rebbe took great interest in the going-ons in the Iranian Jewish community. He asked about their existing educational institutions as well as about those that are in the planning stages. The Satmar Rebbe expressed his delight about hearing about the ongoing connection the community has had for many years with Rabbi Kotlarsky, as well as about the groups of young Rabbis from Iran who fly to Moscow periodically in order to study shechita and learn about Jewish leadership from the Chief Rabbi of Russia, Rabbi Berel Lazar.

The participants heard from Rabbi Gerami about the current state of the Iranian Jewish community, and expressed their great admiration for the Chief Rabbi’s work.

The trip was arranged by Rabbi Zalmy Loewenthal of Merkos Suite 302, who is in constant contact with Rabbi Gerami.