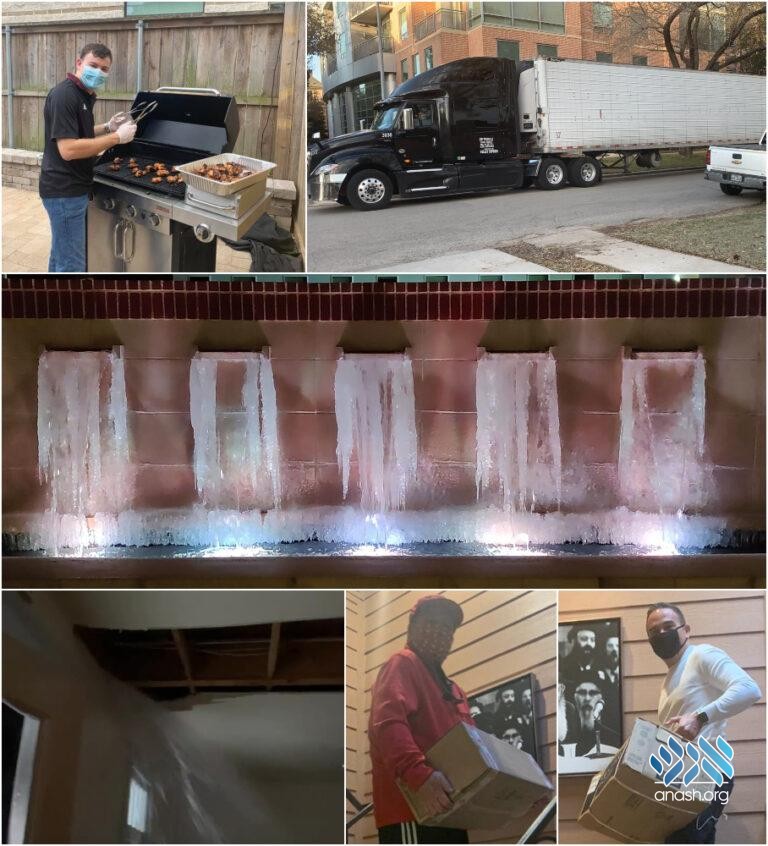 As record-freezing temperatures and power outages simultaneously strike Texas, Chabad Houses across the state are doing all they can to help locals with food, a warm place to stay and basic needs.

Phyllis and her friend Mary Alice were at home in Corpus Christi, Texas, on Monday afternoon, and they were cold. Like millions of other Texans, they had no power and no means to get warm as the temperatures outside continued to drop.

“It was very difficult to deal with,” the 73-year-old Phyllis, a member of the local Jewish community, recalled on Thursday. “We were wrapped in a number of layers of clothing and winter jackets.”

Everywhere one looked in Texas, the picture was the same. Power outages plunging people into cold and darkness; burst water pipes flooding homes and leaving many without fresh water; and even where water remained, it was in some cases contaminated and not safe to drink.

“Corpus Christi lost power on Sunday night,” said Nene Schmukler, co-director of Chabad of Coastal Bend with her husband, Rabbi Naftali. Knowing that their community is primarily an elderly one, they began calling people they know. When she reached Phyllis, “I could hear shivering over the phone, and I told her ‘You are coming here!’ ”

“Because of the coronavirus, we haven’t had people in our house,” Schmukler said, “but I couldn’t just leave her. She thought they were coming for a few hours, but I said they have to stay and so they stayed until the power went back on in their house on Tuesday.”

Said Phyllis, who is now back in her own home with the power on, “They went out of their way to be kind and hospitable to me and Mary Alice. There are not many people like that. They are really wonderful friends.”

Though the Schmukler family, themselves, did not have power—it remained off for 62 hours—they did have a generator that was helping to keep the heat on in some parts of their home. They were also lucky because they had a gas-powered stovetop, giving Nene a means to cook up hot meals for others, including fresh chicken soup and meatballs and spaghetti.

Then a pipe in their house burst, and it seemed like they wouldn’t be able to continue helping others. A friend who heard about their dilemma and knowing how much they do for others, arranged for a plumber to come and help them. Despite working for several hours straight, the plumber refused to take payment from the family and said it was his way of giving back.

“It was amazing to experience that kind of kindness,” said Nene Schmukler.

Reaching Out Throughout the State

Across the Lone Star State, Chabad emissaries have sprung into action to provide a guest room to stranded travelers, offer a warm bed or a hot meal to someone dealing with bone-chilling cold, or even just give people a place to power a cell phone or lend an ear as people struggled to deal with temperatures that were closer to 20 degrees than the normal 70 degrees common in Texas this time of year.

In Fort Worth, Rabbi Dov Mandel, co-director with his wife Chana Tovah of Chabad Lubavitch of Fort Worth & Tarrant County, spent Wednesday driving to various homes and dropping off firewood so people could heat their fireplaces and keep somewhat warm.

“Thank G‑d we haven’t had any damage to our house, and we are just able to help people,” he said in an interview with Chabad. That help included going out and buying small portable heaters that he gave away on Sunday—he tried to get more but the stores were out—and giving away a small generator.

“I posted on Facebook that I had a small generator and wanted to see if anyone needed it. A family friend called and asked if she could have it,” Mandel said. “When she came to pick it up, she said it was going to be used to keep a breathing machine going for an elderly immigrant.”

In Frisco, the Leitman family were dealing with a broken water pipe when the local Chabad emissaries, Mushkie and Rabbi Mendy Kesselman, stepped in to lend a hand.

“We had water all over the house. It took hours to clean up,” said Orit Leitman. “They came and brought us a hot meal. They were really, really amazing. They have such good hearts. The Lubavitcher Rebbe didn’t just send his shluchim out for nothing, now I understand it even more when people are in crisis.”

The classrooms inside the Chabad of West Houston-Katy became makeshift sleeping quarters for people with no heat this week, according to Rabbi Dovid Goldstein, who co-directs the Chabad center with his wife, Elissa. But the Goldsteins also arranged for a handyman to go and help some in their community shut off the water, they also fed dozens of people with hot meals and made sure their elderly community members were doing all right.

“The water situation is really the biggest issue,” he said. “Most people now have power back in Houston, but there’s really low pressure and a lot busted pipes.” When Chabad.org reached him on Thursday, Goldstein was on his way to open the Chabad House so people who had no water could fill up containers and jugs to take home.

Noting that the Torah is likened to water, “so to our job in Chabad is to give not just physical water,” in this situation, “but to give people the warmth and nourishment of Torah.”

Many Chabad Houses across Texas remain without power, some sustaining significant damage, yet they are selflessly taking care of the community. For updates, as power permits, visit www.chabadhouston.com/relief

Please give generously to the relief fund. Choose “COVID-19 Relief” on the drop-down at www.chabadhouston.com/donate or PayPal at www.paypal.me/chabadtexas