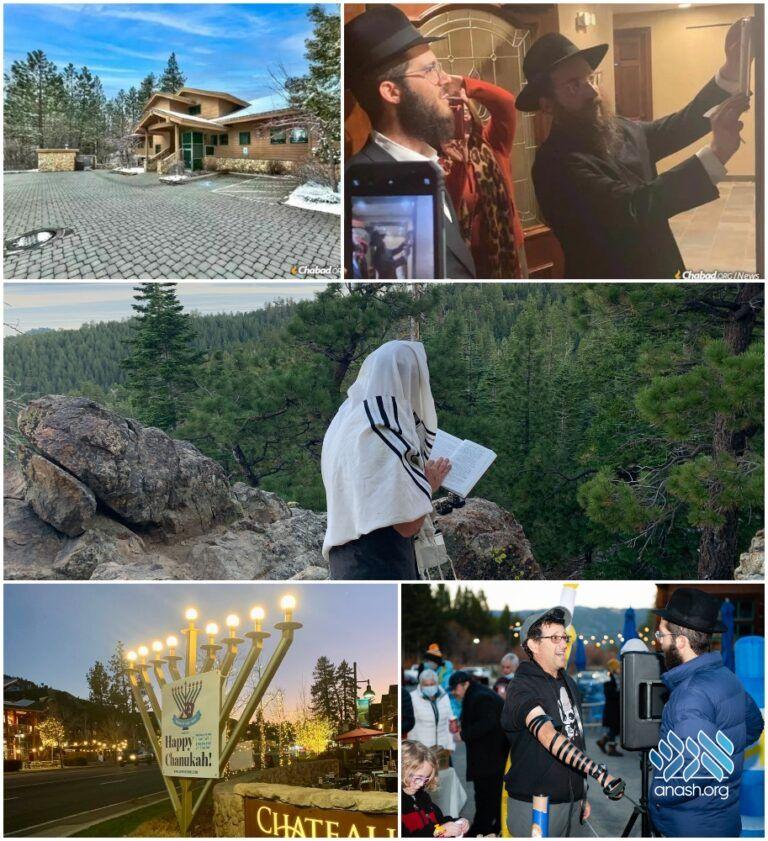 After serving the community of Lake Tahoe, California for almost a decade, shluchim Rabbi Mordey and Shaina Richler purchased a permanent Chabad House…in the bordering town of Stateline, Nevada, allowing them to serve both communities.

The majestic Sierra Nevada mountains loom over Lake Tahoe, straddling the California/Nevada state line, and overlook the country’s largest alpine lake. For decades, retirees, second-home owners and tourists have been flocking to the region for skiing, watersports and nature. Residents are spread out over the area, in towns and villages dotting the coastline, on both the California and Nevada sides.

Jewish locals and visitors have enjoyed a local Chabad-Lubavitch center since 2013, when Rabbi Mordey and Shaina Richler moved there—he’s from Long Beach, Calif.; she’s from Sydney—to establish Chabad at Lake Tahoe. The community is a diverse one, Randy Fleisher tells Chabad.org. Fleisher, who’d been a part-time resident of North Lake Tahoe for eight years and recently moved from Dallas for good, says the local community is small, tight-knit “and very welcoming of visitors.”

That mix of locals, part-timers and tourists keeps things fresh, says Rabbi Richler. “There are several hundred full-time Jewish residents here, and the locals love the tourists.” Shabbat dinner at Chabad can see up to 40 people, and community members enjoy interacting with people from all over the world.

While the Richlers and their five children live in South Lake Tahoe, on the California side, they’ve just moved into a new Chabad center in the aptly named town of Stateline over the border into Nevada. But the border doesn’t make a difference, says Richler; South Lake Tahoe and Stateline are essentially the same city. “Here, it’s not California or Nevada, we’re all from Lake Tahoe,” points out Fleisher.

Until now, Chabad rented space in the Ski Run Marina in South Lake Tahoe, but with the community ever-expanding, they needed room to grow and a permanent center, says Jean Merkelbach, who’s called Lake Tahoe home for 40 years, after coming for a brief skiing trip as a college student and falling in love with the outdoors. “I just love the weather and the nature; I can walk out my door and be on a hike or on the beach. It’s a beautiful piece of paradise, which is at once urban and rural.” She ended up staying and getting into real estate, she explains, which is how she helped Chabad acquire their dream home.

One night while joining the Richler family for dinner, the rabbi mentioned that he was looking to buy a property. “It’s a tough market here; there’s not a lot of commercial property available,” Merkelbach notes. “I told the rabbi I would love to make it happen and donate my fees. I helped him see it was possible.” And the rest, she says, is history.

Merkelbach became acquainted with the Richlers when she met Shaina Richler at a bat mitzvah celebration for one of the children of Rabbi Mendel and Chaya Sara Cunin, directors of Chabad-Lubavitch of Reno, Nev. She says that Chabad is “something different” from past Jewish experiences she’s had. “They’re very welcoming to people of all backgrounds; they open their home. They are the kindest family I know.”

The old center, she says, was bursting at the seams. “They couldn’t do everything they wanted there, they would have to use their home as well and rent other space for larger events.” And, she adds, the location was not convenient for many of the visitors who often stay on the other side of town. “This will be a Jewish community center,” Merkelbach explains. “It’ll bring more awareness to Chabad and allow them to expand their activities.” She says they have plans to open a summer camp for kids from around the country.

“People have been feeling the need for a place to call home,” agrees Shaina Richler, and the $3 million project will create that.

The property—the first synagogue in Nevada’s Douglas County—is located in a stunning setting, and is undergoing renovation to tailor it to the community’s needs and make it a forever home for the Lake Tahoe Jewish community.

Fleisher, who has a background in the real estate business, was among the community members who helped the rabbi move things along and finalize the sale. Like many, he moved to Lake Tahoe for skiing and the water, but one morning, while praying, he ran into a problem. “I was putting on my Zaide’s tefillin—they were quite old, and I don’t know if they were still kosher—when the strap tore. It broke my heart, and I didn’t know what to do,” he remembers. Fleisher called a friend in Dallas who suggested that he Google search “Chabad near me.”

“Rabbi Mordey took my call and helped me order a new pair, and that was the beginning of our relationship,” he says, adding that he now studies Tanya weekly with the rabbi and is a regular synagogue attendee.

“This is a better location,” says Fleisher. “There’s no comparison in terms of space. It will grow the community even more.”