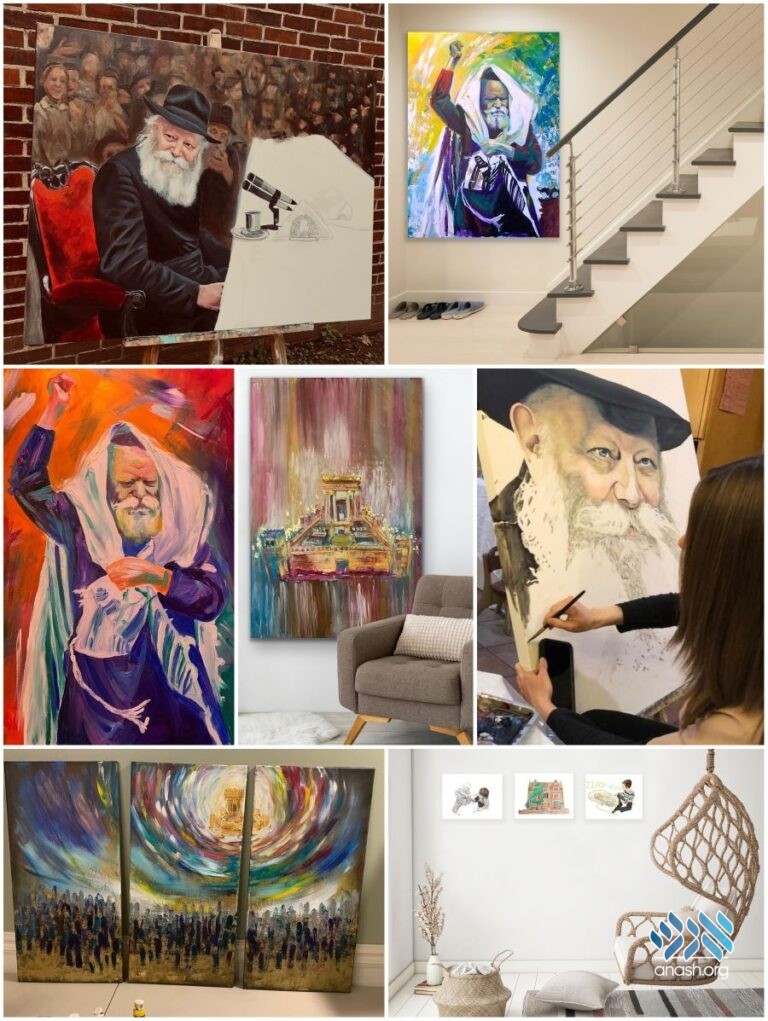 When her first child was born, Mrs. Keren Gordon put her art on hold. Then she discovered that creativity and motherhood blend together as magnificently as the colors in her paintings.

For as long as she can remember, Mrs. Keren Gordon’s happy place was in front of a canvas, with charcoal pencils or a paintbrush in hand.

After the birth of her first child, however, she stopped painting. Her art tucked away, she reassured herself that today she would throw herself into this joyous, sacred role, and one day when her kids are grown she’ll pick up her pastels and continue where she left off.

Several years later, however, Mrs. Gordon found herself in a bind. She had been writing for Anash Chinuch, an organization that promotes chinuch al taharas hakodesh, and she wanted to include images that would capture the hearts of her readers. Such pictures, however, proved difficult to find.

Finding no satisfying alternative, she sat back down at the art table and began creating masterpieces to complement her online Torah content. Having rediscovered her passion for creative expression, however, she found she didn’t want to stop.

Before long, her home in Kingston, PA was filled with paintings depicting scenes of kedusha – a gilded Bais Hamikdash on an acrylic bed of dramatic red hues, watercolor images of children doing mitzvos, and paintings of the Rebbe that are remarkably true to life. Then others began admiring and purchasing her work, and her new business took off.

Like many artists, Mrs. Gordon had a major hurdle to conquer: perfectionism. Countless paintings remained unfinished, discarded in the pursuit of a more perfect product. Then one day, while visiting the home of another artist, something fascinating caught her attention.

“Every corner of her home was filled with paintings,” Gordon told Anash.org. “Some were better than others, and I was most in awe of the imperfect ones. She had the bravery to put them up on her walls. This painting had something to say, and the message was more important than any expression of her perfect ability. Her art gave me strength to make my own imperfect works.”

When it comes to creating paintings for her home and others’, Keren Gordon places great importance on both the physical beauty of her pieces and the holiness they depict. She gains inspiration from the Rebbe’s words about the akeres habayis who beautifies her home in both physical and spiritual ways.

Gordon’s masterful acrylics are among her most successful, with pictures of the Rebbe and artistic depictions of the Bais Hamikdash proving wildly popular. As one friend put it, “The warmth and vibrance of these paintings light up my home. What better way to decorate than through the masterful strokes of Keren’s paintbrush?”

As for Mrs. Gordon, she has learned that her time in front of the canvas need not take away from her dedication to motherhood – in fact, she finds that the two enhance each other rather nicely.

“Hashem gives us our unique gifts for a purpose,” Mrs. Gordon said. “If we allow our soul to express itself, we will have more life in our avodas Hashem!”

Keren Gordon Art adds new pieces to her magnificent sale collection each week. Her galleries can be viewed on Instagram and Whatsapp. Use code ANASH for 5% off your order!