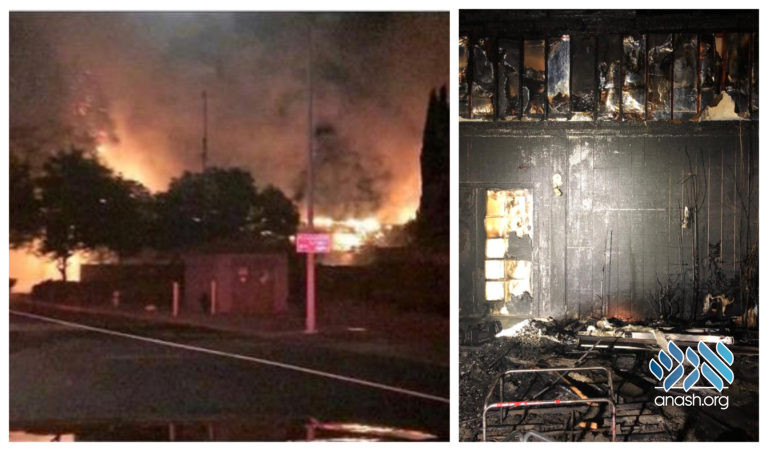 The Chabad Center for Jewish Life in Pleasanton, California caught fire last night, but escaped major damage. The building, which is under construction, remains intact for the most part. Quick action by local firefighters helped limit the damage to the exterior and roof of the shul.

No immediate signs of arson were found, but authorities are still trying to find the source of the fire, which started some time after Midnight.

“An incredible thank-you to the firefighters who saved the building. They saved the Torahs and because of them we have our building,” Rabbi Raleigh Resnick, shliach at Chabad of the Tri-Valley, told the Pleasanton Weekly outside the shul Friday morning. “As a community, we will come together and rebuild, and it will be grander and greater than it was before.”

Resnick said he can’t figure out how the fire ignited on the outside of the building when the Hopyard Road property should have been empty at that time for several hours, but he refrained from making conclusions about the cause.

“It’s important to not get the people up in arms that ‘they’re burning down synagogues,’ the shliach told the Pleasanton Weekly. “There’s no signs of arson … But it’s certainly suspicious that a fire would start in the middle of the night. We don’t know.”

The flames were first spotted around 12:45 a.m. Friday coming from the Chabad House at the corner of Hopyard Road and South Valley Trails Drive, according to LPFD battalion chief Jason Solak.

Firefighters arrived to the Chabad House building within six minutes of the first call and managed to keep the flames to the exterior and roof area in the back half of the building, aggressively attacking the flames and bringing it under control within half an hours, Solak said.

Exterior walls in the backyard and patio areas sustained significant damage, as did several parts of the walls on either side, the eaves and roof. Inside, there was some minor fire damage in the dining room but more smoke and water damage took place throughout the inside of the building, as firefighters successfully managed to keep the flames out of the interior.

No injuries were reported in what was classified as a one-alarm fire, according to LPFD deputy chief Joe Testa. Alameda County Fire Department crews also helped in the initial response, and LPFD firefighters stayed on scene for several hours.

“The cause of the fire is under a joint investigation by the Pleasanton Police Department and Livermore-Pleasanton Fire Department. As of now there are no indications of arson,” Testa said. A damage estimate is not available yet.

The building is under renovation currently. They had recently won a long zoning battle with local residents and neighbors and had begun construction.

To contribute to Chabad of Tri-Valley recovery fund, click here.