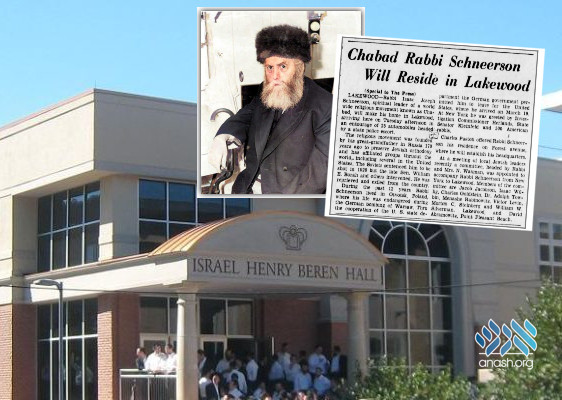 The clipping is from Asbury Park Press on April 12, 1940 – Daled Nissan 5700, less than one month after the Frierdiker Rebbe arrived in America.

A copy of the clipping was given to Anash.org by Rabbi Chaim Dalfin. More about the subject can be found in his book ‘Lakewood and Lubavitch’.

(Special to The Press)

Rabbi Isaac Joseph Schneerson, spiritual leader of a worldwide religious movement known as Chabad, will make his home in Lakewood, arriving here on Tuesday afternoon in an entourage of 25 automobiles headed by a state police escort.

The religious movement was founded by his great-grandfather in Russia 170 years ago to preserve Jewish orthodoxy and has affiliated groups thruout (sic) the world,. including several in the United States. The Soviets sentenced him to be shot in 1920 but the late Sen. William E. Borah and others intervened. He was reprieved and exiled from the country.

During the past 12 years Rabin Schneerson lived in Otvotak, Poland, where his life was endangered during the German bombing of Warsaw. Thru the cooperation of the U. S. state department the German government permitted him to leave for the United States, where he arrived on March 19. At New York he was greeted by Investigation Commissioner Herlands, State Senator Kleinfeld and 500 American Rabbis.

Charles Paston offered Rabbi Schneerson his residence on Forest avenue, where he will establish his headquarters.