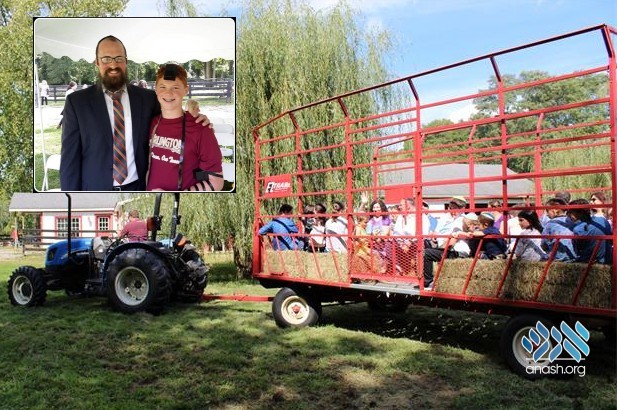 The 25-acre farm Chabad House serves as an educational, spiritual, and communal hub for Jewish life throughout New York’s Hudson Valley. The rabbi hopes to start a community gardening program with plots for interested families.

Coming down Blue Hill Road in the Hudson River Valley, Rabbi Zalman Sandhaus says it’s easy to ignore an unassuming residential area amid the surrounding emerald landscape. “When you drive by, you cannot tell what’s going on behind—it just looks like a house on the road.” But, he continues, “as you come up the driveway and turn the corner, you see this magnificent view of mountains in the background with a barn and rolling hills and animals grazing … a tractor and a wagon and nice views of weeping willow trees all around.”

As if the gorgeous scenery weren’t enough, Sandhaus says visitors often remark “it smells so nice” as the aromas of fresh-cut grass and wildflowers welcome them to the Pardess Chabad Farm.

But just as it is in agriculture in general, the power and life of the Pardess Chabad Farm is not simply what is visible—fruit trees in bloom, oven-browned loaves of bread and capering livestock—but rather, the rich web of relationships that are nurtured there: between people, community, nature and the Divine.

From the ‘Heights’ to the ‘Valley’

Both of the Sandhauses were born and raised in the Crown Heights neighborhood of Brooklyn, N.Y. They said they always knew that they wanted to serve the Jewish community, inspired by the vision and teachings of the Rebbe in whatever way they were called. So in 2014, despite a complete lack of any familiarity with rural life, when a friend said that they might be able to serve Jewish families spread out across southern Dutchess County, N.Y., they picked up and moved to Fishkill in the bucolic Hudson Valley where they established a Chabad-Lubavitch center.

Goldy Sandhaus confessed it took a little while to adjust to country life. “At first, I couldn’t even handle that there weren’t sidewalks,” she laughs. Six years later, she says the reverse is true; now she feels stressed going into the city.

Although Jews began farming throughout the valley more than a century ago, many Jewish residents haven’t been connected to each other or a Jewish community. With such a diffused population, the Sandhauses’ first challenge was just to find them. Rabbi Sandhaus picked up a phone book (yes, that’s still a thing in some places) and went looking for Jewish-sounding names and introducing himself to them over the phone and even by knocking on doors. Friendship by friendship, connection by connection—“that was how he became such an integral part of the community,” says Steven Shuchat, a school administrator and one of the many people that the rabbi found in that phone book.

Shuchat was also born in Brooklyn, where as a child he accompanied his grandfather on the long walk to synagogue every Saturday. But decades after moving out of the city, he felt disconnected. This feeling of disconnection is exactly what the Sandhauses were hoping to address. “We wanted to provide a unique experience of community, despite people feeling like they’re isolated and the only Jew in the area,” says the rabbi.

“It was a blessing that he touched my life,” Shuchat says about the young rabbi. “He really turned things around for me. He brought me back to my childhood, to how I was raised.”

Shuchat also explained that the Sandhauses made demystifying Judaism and educating the entire community—people of all religious and cultural backgrounds—about it a core part of their work. “I would meet him [Rabbi Sandhaus] in Starbucks and he would bring his tefillin, and I would lay tefillin right there in Starbucks,” says Shuchat.

Then others would ask questions, which would give the rabbi a chance to connect with them and teach. Over the next few years, that led to normalizing Jewish life and practice in the community at large, he says.

The innovative educational methods used by the Sandhauses aren’t restricted to moments of spontaneous education in a coffee shop. “The Hebrew school is our most successful program and the foundation of our community-building,” says the rabbi.

Goldy Sandhaus, the former program director of the Jewish Children’s Museum in Crown Heights, folded all of her experiences educating and creating excitement for learning in the classroom, the museum and at summer camp to her vision for the Warren and Ellen Davis Judaic School of the Arts.

“I was always an out-of-the-box, hands-on teacher,” she says. “So, when we opened the Hebrew school, everything was craft-based and experiential. On the day we learned about kosher, we managed to get a farmer to come to our Hebrew-school location (then in Fishkill) and bring a goat … with him, so we can show what split hooves are and how these animals chew their cud,” she says. (Only animals with split hooves that chew cud are kosher for consumption.) She doesn’t only do “hands-on” education; she’s even had the kids learn about traditional “wine” (grape juice) making by having them stomp on grapes with their feet.

Erica Alti, also an educator and a mother of three, was dazzled by the Sandhauses’ Purim Megillah reading. “(The rabbi) was saying the whole megillah, but at the same time, he had an interactive screen with the whole story, so that even if you weren’t familiar with it you were able to follow along.”

‘I’m Not Joking’: They Bought the Farm

The Sandhauses have three children of their own. While living and working in the town of East Fishkill, on Sundays Sandhaus says they often visited farms. “We really loved it,” she says. “We loved seeing the fruit grow, picking it, eating it.”

One day, strolling with the family through the rows, she suggested to her husband that they should buy a farm. He laughed. “You know, Zalman, I’m actually not joking,” she recounts.

The excitement from everybody who heard the idea was matched by the challenge of finding and financing the right farm. But miraculously, in 2019, they closed on a beautiful property in Hopewell Junction and named it “Pardess” (which means “orchard” in Hebrew) Chabad Farm.

But even for seasoned educators like the Sandhauses, learning to run a farm wasn’t easy.

As part of the farm’s grand opening on Sunday, the Sandhauses had advertised a petting zoo. But as of the Friday morning before, they did not yet have the animals. Rabbi Sandhaus found a seller who arranged to have three goats and two sheep dropped off later that day.

“I knew nothing about them,” he bemusedly remembers. “The delivery person said the fencing was good, but it wasn’t good enough. The animals were the stars of the opening festivities on Sunday, but the day afterward, we lost the sheep.”

Instead of feeling defeated, the Sandhauses leaned on the joyful curiosity that they bring to their work as Jewish educators. “When you come into something thinking you know what you’re doing, then you have a lot of surprises,” says Goldy Sandhaus. “But when you go into a project knowing you know nothing about it, everything is just learning but not really surprising.”

“Over time you get a feel for what they want,” the rabbi says of the animals. “You get to know them by observing them day in and day out. In that way, they are a lot like babies.”

And the learning continues. Many of Judaism’s 613 commandments pertain specifically to agriculture and therefore are unfamiliar to the majority of Jews, who are not involved in farming. The Sandhauses have had to learn about what to do about animals who get out of their enclosures on Shabbat without violating the laws that prohibit trapping animals, and learn when they are permitted to harvest the first fruits on their newly planted grapevines, plum trees and hascaps. “We’ve got work cut out for us for the next 50 years,” says Goldy Sandhaus. “Farms that are hundreds of years old are still adding new things.”

The couple has big plans for the future. They hope to start a community gardening program with plots for interested individuals and families, and a fixed time for everyone to come work those plots. That way, folks with more experience will get to help coach those with less, and everyone will get to build closer friendships and perhaps enjoy some kosher goodies made fresh by the Sandhauses.

Last school year until the onset of the pandemic, the Judaic School for the Arts met in the barn. “The space is exciting for the kids,” Sandhaus says, explaining that getting to feed the animals during the drop-off and pick-off times is one of the perks of the location.They also plan for an expansion for the arts school in the years to come that will retain the country setting.

Even during the pandemic, the Sandhauses have continued to connect to others and support their community. Finding himself at home a lot more, Shuchat wanted to spend time exploring traditional Jewish prayer. Realizing that he didn’t own a siddur, a Jewish prayer book, he called the rabbi to ask for some advice about the order of certain prayers. “I’ll get back to you,” the rabbi said hurriedly. A few minutes later, he was at Shuchat’s door with a siddur and some notes.

“Your home is now your synagogue,” he said.

Both Shuchat and Alti, who recently moved to nearby Poughquag, N.Y., said that they felt most delighted and most connected when the Sandhauses asked them for help. Before the most recent Passover, the rabbi sent an email to members of the community looking for volunteers to do contactless matzah delivery. “It was perfect,” says Alti. “We had nothing to do. Everything was shut down.” The delivery route became an opportunity to meet other Jewish families in the area.

The Sandhauses are also looking into whether they can do safe, socially-distant events like bar and bat mitzvahs and weddings since they have such a beautiful outdoor location. Having an outdoor event here “doesn’t feel like an afterthought because it’s a place where people are already drawn,” says Rabbi Sandhaus.

Observing the complex interconnectedness of life on the farm has become a source of spiritual nourishment for the rabbi. “Hashem created everything for a purpose; small plants and weeds, bugs … spiderwebs that seem insignificant or even annoying are all part of the puzzle,” he says. “Plants we think of as weeds can have medicinal value, what we think of as pests provide nourishment for the animals and improve the environment for us, and so on. It’s amazing to watch.”

Likewise, the farm has helped people find interconnectedness. Everybody connects to their Jewishness differently, says Goldy Sandhaus—some connect more to the mitzvot, some to the culture and some to the food. On this Jewish farm, there is something for everyone.

“Everybody is looking for interaction, community and friendship in a Jewish setting that will help them find their unique best selves,” the rabbi muses. “The farm has done just that, and we’re looking forward to meeting many new friends in the new year.”