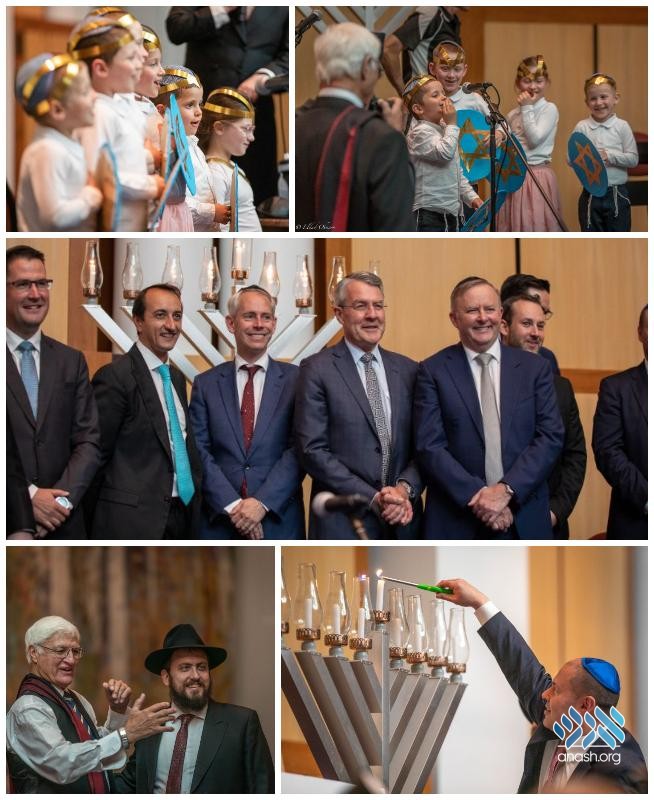 Chabad ACT hosted its traditional “Chanukah on the Hill” ceremony in the Great Hall of Parliament House, celebrating with members of all of Australia’s major political parties.

On the last sitting day of the Australian Parliament for 2020, Chabad ACT hosted the traditional “Chanukah on the Hill” ceremony in the Great Hall of Parliament House in the presence of tens of Members of Parliament and Senators including multiple Government Ministers and Shadow Ministers. Jewish parliamentary staffers and community leaders were also in attendance.

Notwithstanding restrictions relating to the numbers of community attendees allowed and physical distancing, the event was a resounding success and a welcome conclusion to a turbulent year for the nation’s Political leaders.

Chairman of Chabad ACT, Rabbi Shmueli Feldman, who MC’d the event, welcomed the Jewish Parliamentarians and the leaders and members of all of Australia’s major political parties.

Rabbi Feldman spoke of the significance of public Menorah lightings and the efforts of Chabad globally and nationally in spreading the message of the miracle of Chanukah, even as events are held in restricted formats. Rabbi Feldman encouraged the Federal Politicians to rededicate themselves in ensuring that the Jewish people in Australia can continue living and practicing their religion freely for generations to come.

Co-Director of Chabad ACT and Principal of the newly established Canberra Jewish School, Rebbetzin Chasia Feldman, spoke of the significance of how each branch of the Menorah lights up its surroundings with its own character, yet with a common elevated purpose, representing the diversity of our communities, inspiring them to work together to achieve our goals.

Rabbi Elchanan Miller from the ACTJC Inc was invited to lead the pre-Chanukah blessings on the kindling of the Menorah. Hon Josh Frydenberg MP, Treasurer of Australia and Deputy Leader of the Liberal Party was honored with the lighting of the Shamash. Jewish MPs were then invited to light the candles.

Senator Hon Zed Seselja, Assistant Finance Minister and Senator for the ACT, who also helped to coordinate the event, was honored with reading the Prime Minister of Australia, the Hon Scott Morrison MP’s greetings. Senator Seselja also thanked Rabbi Feldman for his exceptional leadership on the national level and for the important positive impact Chabad ACT continues to make in Canberra and surrounds.

The Hon Anthony Albanese, Leader of the Australian Labor party and Federal Opposition, then delivered a speech as the first major party leader to participate in the Menorah lighting in Parliament House since the then Prime Minister of Australia Bob Hawke in 1988. Mr Albanese spoke about the enormous contribution Jewish Australians continue to make and reaffirmed his commitment to the safety and security of Australia’s Jewish community.

The Treasurer, Hon Josh Frydenberg, addressed the crowd quoting the late Rabbi Jonathan Sacks OBM in explaining the connection with Chanukah and education and the importance of imparting our cherished values onto the next generation through quality education. Mr Frydenberg reminisced how the songs that the Canberra Jewish Children’s choir beautifully sung reminded him of his own Jewish education as a child.

Further addresses were then given by Hon Mark Dreyfus and ECAJ representative Mrs Veronica Leydman.

Rabbi Shmueli Feldman concluded the event by thanking all those who had come to show their support for the Jewish community and encouraged everyone to take a complimentary box of Chanukah chocolate coins and menorahs on their way out.