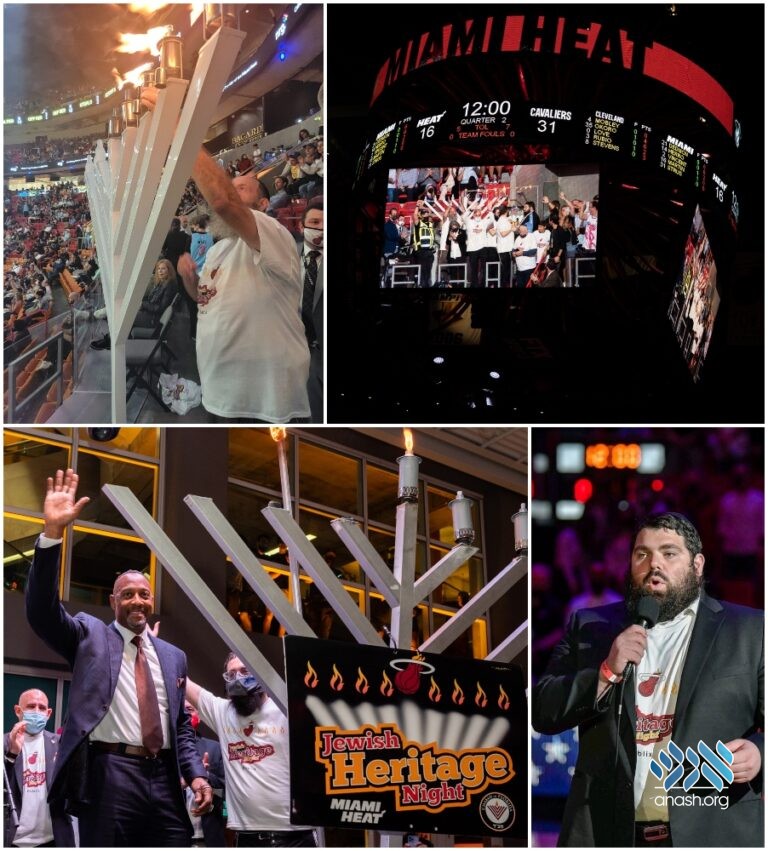 Chabad in Florida celebrated Chanukah with thousands of Miami Heat fans at Jewish Heritage Night last Wednesday. After lighting the menorah, dancing rabbis electrified the crowd, while thousands cheered and sang along to blaring Chanukah tunes.

After a year off due to the Covid pandemic, the Miami Heat’s Jewish Heritage Night (JHN) saw its largest turnout as thousands of avid sports fans excitedly marched into the newly branded FTX Arena in Miami, Florida to receive a colorful Jewish Heritage T-shirt, witness the night’s anticipated matchup between the Miami Heat and Cleveland Cavaliers, and enjoy the planned holiday festivities.

After Cantor Aryeh Hurwitz sang a stirring rendition of the National Anthem, play got under way.

At the game’s first time-out, Michael Baiamonte, the voice of the Miami Heat invited the evening’s organizers, Chabad rabbis, Rabbi Pinny, Rabbi Chaim Lipskar and his brother Rabbi Eli to come on the court and be recognized for their outstanding efforts and wonderful success.

The crowd was then asked to rise to its feet as the rabbis, joined by Mayor Levine Cava and the Israeli Consul General, lit a beautiful LED decorated menorah. As Cantor Hurwitz belted out the Chanukah blessings and song, the large crowd responded with thunderous applause. The in-game menorah lighting was presented by Publix Supermarkets.

As the second quarter came to an end, thousands of fans made their way onto the East Plaza for kosher food and an electrifying halftime show headlined by “Zo,” Heat legend and NBA Hall of Famer Alonzo Mourning.

After Zo helped kindle the giant East Plaza Menorah, he, Heat Mascot Burnie and the dancing rabbis electrified the crowd as Jewish rock band Pardes blared their Chanukah themed ballads. The thousands on hand cheered and sang along as they exuberantly bounced on their feet.

Marc Davis, who recently moved from Canada to Davie and was attending Jewish Heritage Night for the first time exclaimed, “I could not believe the Heat stopped their game to light the menorah… and I never saw such powerful energy as the dancing going on here at half-time!” Davis continued with a broad smile, “Am Yisroel Chai! This is a Chanukah celebration I will never forget!”

Rabbi Chaim Lipskar who also serves as director of the Shul Downtown Miami observed, “Tonight we are witnessing true unity… That is exactly the message of Chanukah. The lights of the menorah represent a universal message of unity, kindness and freedom, and that is something that all Jews and non-Jews appreciate, relate to, and can celebrate together.”

Rabbi Pinny who also directs Chabad SW Broward noted that it was an honor having Miami-Dade Mayor Cava-Levine participate in the menorah lighting due to her leadership role and the compassion she demonstrated after the June building collapse in Surfside.

“Chanukah is all about transforming darkness into light and that is happening tonight as we come together for an incredibly joyous occasion to celebrate Chanukah and Jewish Heritage Night in such a magnificent and electrifying way.”

Rabbi Pinny concluded with a hopeful prayer that the world would only continue to unite for times of joy and happiness and expressed yearning for the messianic time when the grand menorah would be kindled in the third and final Holy Temple.