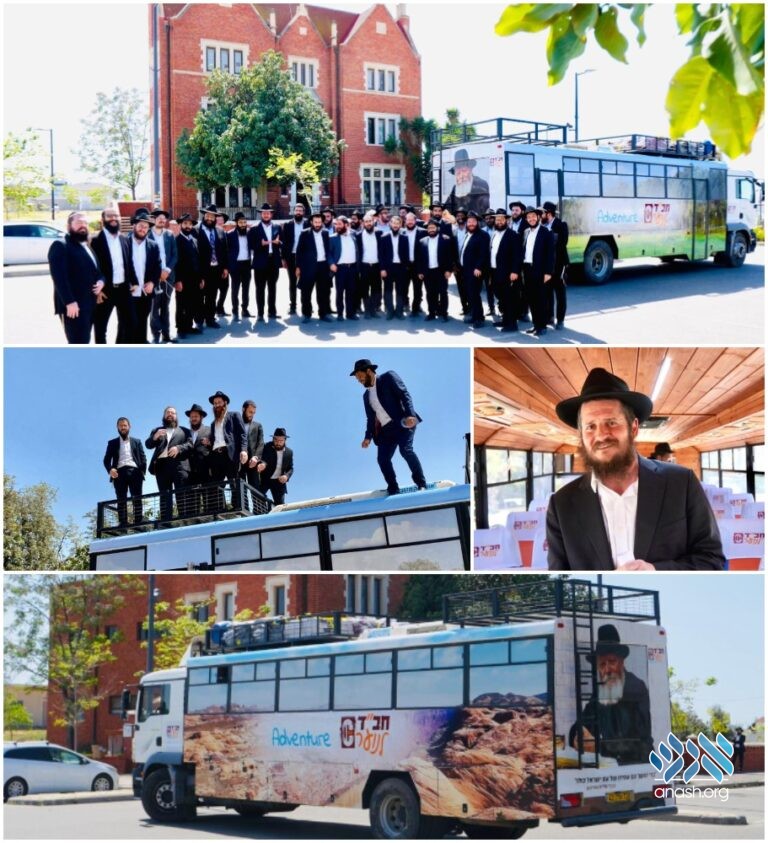 Shluchim who direct C-Teen chapters across Eretz Yisroel gathered in Kfar Chabad on Tuesday to dedicate a specially produced C-Teen Bus, built especially for shluchim to bring teenagers on all sorts of trips and excursions.

On Tuesday, Rosh Chodesh Iyar, a new “Chabad bus” was dedicated in Kfar Chabad – the first of its kind in Eretz Yisroel, and possibly in the entire world!

The bus is a “combination bus”, a purpose-built truck with a “passenger container” fulfilling the role of a bus. The large passenger area leaves space for more than just the seats that are on a regular bus.

Commissioned by Chabad L’Noar, the Israeli version of CTeen, under the direction of Rabbi Moshe Shilat, the magnificent bus was built and developed over a long period of time, with attention paid to even the smallest details.

The bus is equipped with an expandable kitchen which folds into the side of the bus for travel, a refrigerator, karaoke system and huge screen, portable toilet and pergola, tables, chairs and more. The outside of the bus was also specially designed in the colors of the Chabad L’Noar logo.

On the roof of the bus, there is a storage area for tents and equipment for overnight trips, including projectors that illuminate a far area.

The bus will be used by shluchim who serve in Chabad L’noar, to arrange trips to mekomos hakedoshim, field Shabbatons, and any other excursions they arrange for their young charges.