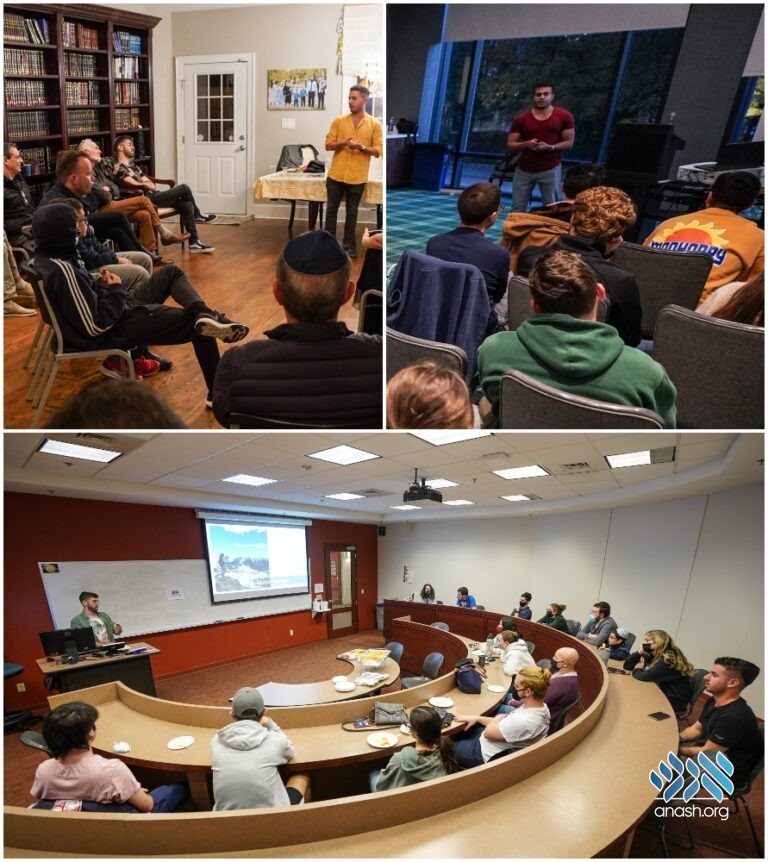 A new initiative of Chabad on Campus and Belev Echad is bringing wounded Israeli soldiers to tour American Universities with the mission to combat antisemitism and raise Jewish pride.

Nothing compares to the intensity of debate on the lawns and halls of a college campus. Young, impressionable students, full of idealism and optimism, take up causes and movements with passion and ferocity not seen much anywhere else.

Which makes being a Jewish student today increasingly perilous. Every fringe way of thinking takes an outsized role there, and as such, whatever anti-Semitic ideas there may be swirling around are only intensified. Particularly when it comes to the “Israel conversation,” Jewish students find themselves on the receiving end of much vitriol and hate.

When anything flares up in the Holy Land—regardless of who’s at fault or the circumstance—Israel, and very quickly by extension, all Jews, are pilloried and savaged on social media, conversations on campus, and protests alike.

It’s a challenging prospect for any Jewish student.

And it’s a prospect that Chabad on Campus International identified long ago—and is working hard to combat. For years, with a bevy of initiatives, they have been empowering shluchim on college campuses to stem this vicious tide and promote a proud and bold version of Yiddishkeit.

One such unique program comes through a partnership with Belev Echad, an organization servicing wounded Israeli soldiers under the leadership of Rabbi Uriel and Shevi Vigler from the Chabad Israeli Center on the Upper East Side of Manhattan, New York.

“For a number of years, we were bringing groups of wounded Israeli soldiers to New York to simply give them a good time and a chance to rehab,” said Bentzi Sasson, delegation director for Belev Echad. “Starting about four years ago, we partnered with Chabad on Campus International to bring a pair of wounded soldiers to campuses around the United States and talk about their experience to the students. Suffice it to say that the response has been incredible. Shluchim are lining up to bring this program to their campus.”

“We’re constantly asking ourselves what we can do to be of service to the shluchim and how we can collectively reach every Jewish student on campus,” said Rabbi Yossy Gordon, CEO of Chabad on Campus International. “Our collaboration with Belev Echad has been a remarkable way of touching many students who would otherwise never walk through the door of a Chabad House. The Jewish pride these events set off is like a roaring flame, and it’s only getting hotter.”

Just this past Semester, Chabad on Campus and Belev Echad organized a tour of fifteen campuses. “I can’t even tell you just how impactful it is to hear it from the soldiers themselves,” said Rabbi Zalman Bluming, who, together with his wife Yehudis, co-directs Chabad at Duke & UNC. “A typical student has no idea of what life is really like on the ground in Israel, so when they hear a report from a real person who actually lived and lives through it, it’s life-changing. And to hear it from someone who visibly gave up so much just makes it all the more powerful.”

A participating student was particularly reflective. “Jewish life on campus can be quite challenging. There’s just so much hate and misinformation, and over time, it can chip away at my resolve and pride. Walking out of that session with the wounded Israeli soldiers changed everything for me. I’m bursting with pride of my Jewish heritage and reinvigorated with my commitment to Judaism.”

Drawing from the Rebbe’s unique perspective reiterated a number of times to the wounded soldiers that they are not “handicapped,” rather “special,” the program is a boon for the soldiers themselves, too. “Many of these soldiers are suffering from PTSD and other ailments, and life back home can be crushing. Many of them feel as if they have no value anymore. To go around and visibly fire up so many young college students does wonders for their own self-esteem and health,” said Rabbi Vigler.