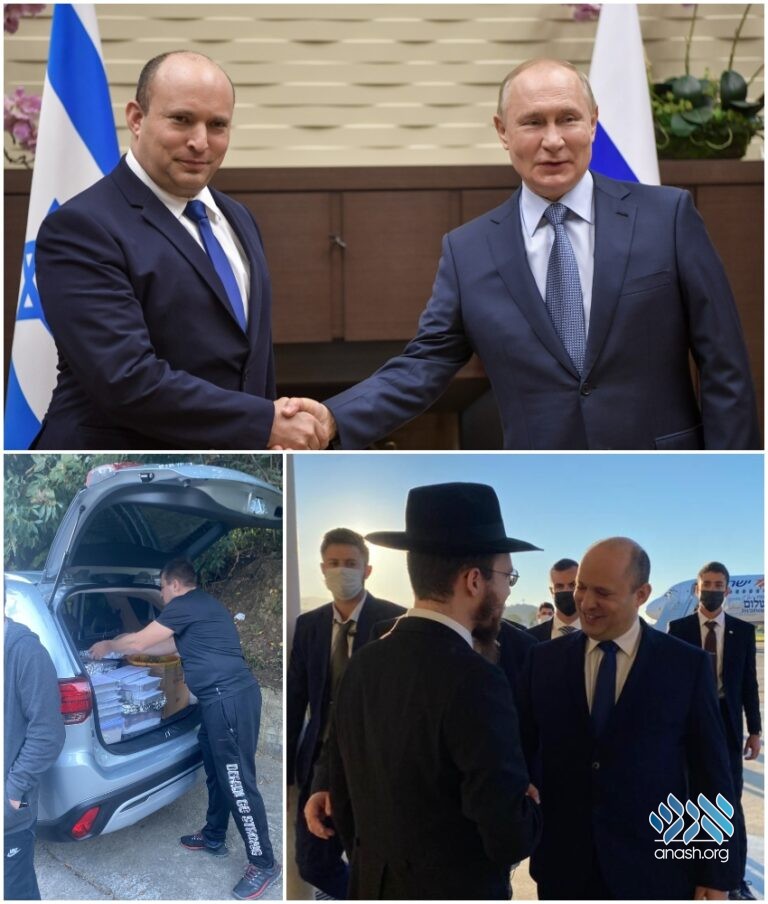 Israeli Prime Minister Naftali Bennett was forced to remain in Russia for Shabbos after a meeting with Vladimir Putin went longer than expected. Chabad was on hand to provide all their Shabbos needs.

At the airport, he was welcomed by Rabbi Shalom Lazar, the city’s Chief Rabbi, who wished him success on behalf of the country’s entire Jewish population.

Putin and Bennett were expected to focus on the Iran nuclear program, efforts to return Iran to the 2015 nuclear deal, and Iranian military entrenchment in Syria, near Israel’s northern border.

“It was an honor for us to welcome the Prime Minister of Israel to our city,” said Rabbi Lazar. “and to personally invite him to return for an additional visit to Russia’s Jewish communities. The revival of Jewish life across the land is astonishing, and deepening the connection between the countries can contribute greatly to the strengthening of our communities.”

Bennet was originally scheduled to return to Israel before Shabbos. However, the meeting went on for an additional two hours, and then Putin took Bennett for a tour of the grounds of his vacation home in the Black Sea resort town of Sochi, forcing the prime minister to remain in Russia for Shabbos.

Despite the last-minute notice, staff at the local Chabad House organized everything needed for Shabbos including Shabbos meals for Prime Minister Bennett and the entire Israeli delegation, as well as a Sefer Torah, chumashim, and siddurim.

Back in August, Prime Minister Bennett was forced to spend Shabbos in Washington after his meeting with President Joe Biden was delayed until Friday in the wake of the suicide bombing in Afghanistan. Embassy staff organized everything needed for Shabbos in the Willard Intercontinental Hotel with the held of Chabad of Rockville, Maryland.