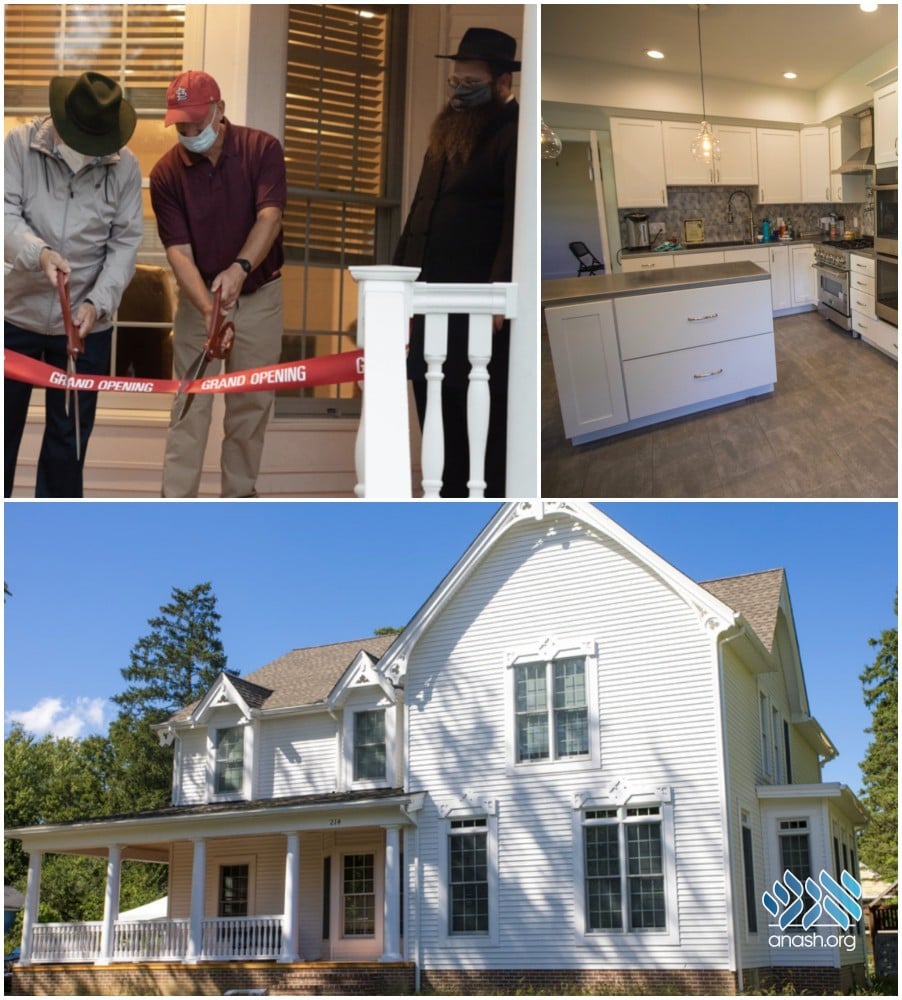 After five years of attempting to renovate a building to use as a Chabad House on Oberlin College, Ohio, Shluchim Rabbi Shlomo and Devorah Elkan were approached by two alumni who took it upon themselves to get the project done.

“Maybe you are here because you were just curious to learn what Chabad is about. Maybe a friend asked you to accompany them here. However you got here, give the experience some time, and let your curiosity linger. Welcome to this welcoming place where you and your true self can meet and smile in recognition of each other.” These words are part of the message Oberlin alumnus Mark Rutenberg had engraved on a plaque at the entrance of the brand new center he helped to build for Chabad of Oberlin College, Ohio.

The new center is also the city’s first ever synagogue and independent Jewish community structure. Opening its doors just in time for the start of the new academic year, the reconstructed 19th century home took five years and many hiccups to build.

In 2010, when Rabbi Shlomo and Devorah Elkan arrived in Oberlin with the help of a seed grant from George Rohr and the Rohr foundation, they moved into a 1400 square foot, one bathroom home that served as their base for all student activities. With Jewish students making up about a third of the college population, the premises soon became too tight. On Friday nights, students spilling out of the living or dining rooms, found seats on the stairs, the porch, the upstairs hallways and even the front steps.

In 2015 Chabad purchased the 1840s home on West College Street just three doors down from the central freshman dorm, intending to renovate. When repairs proved too extensive, complicated and costly, the Elkans secured the assistance of donors and began constructing the building anew. The project was barely underway when one of the primary donors could not fulfill their pledge. Unable to guarantee the costs of construction, the Elkans were forced to halt operations.

Over the next years, they continued to operate out of their small home, all the while attempting to raise the funds necessary for the new center. With all of their funding going to the ongoing costs of leading an ever-growing community, there was no surplus for building expenses.

Then last August, Rabbi Shlomo got a call from Mark. A philosophy and psychology major, Mark graduated Oberlin in 1973. Now living in New York, he found himself in town and stopped at the home of Rabbi Leibel Alevsky of Chabad of Cleveland who had introduced him to Chabad philosophy while he was a student more than 40 years earlier. When he told the rabbi he’d like to do something for Chabad in return, Rabbi Alevsky put Mark in touch with Rabbi Elkan. On an Oberlin Facebook group a few months earlier, Rabbi Elkan had met another alumnus, Steven Shapiro, Class of ‘83. The two had connected and began a warm friendship. Impressed by the work the Elkans were doing to provide a Jewish space for students and faculty at his alma mater, Steve joined forces with Mark and the duo resolved to make the building project a reality.

In July, the Elkans and their seven children moved into their completed 7,000 square foot new home. The center, reconstructed to preserve its historic exterior, features a large multi-purpose room, commercial kitchen (with a pantry the size of their previous kitchen), library, classroom and guest suite. A carriage house on the half-acre property was converted into a student lounge where students can get some quiet study time, or hang out with friends without feeling they are invading the family’s home. With fireplaces and plush seating, the center is at once spacious and cozy. “We are overjoyed and eager to expand our offering to the students and Jewish community,” Rabbi Elkan said.

The expansive outdoor area is particularly beneficial in the COVID era. As they welcome a new crop of students, the Elkans have pitched a tent to allow for outdoor programming even in inclement weather in compliance with pandemic regulations. “The tent is temporary, but the new center signifies our permanent commitment to the Oberlin community. As we begin a new decade since our arrival, it is a stepping stone towards continued growth,” Rabbi Elkan said.

On September 7th, at a ribbon-cutting ceremony to mark their official opening, the Elkans were joined by Oberlin President Carmen Twillie Ambar, Mark and Steve. Though it was the second rainiest day in Ohio history, around sixty guests joined them in person, with another 300 joining on Zoom and Facebook Live.

President Ambar praised the Elkans’ “welcoming and genuine spirit” and their contribution to the Oberlin College community. “You are always right there at the ready,” she said. “Ready to be creative and innovative and it is this open spirit of, ‘how can we make it happen?’ that is the reason we all love you.” Noting the significance of Chabad’s new home she said, “This structure is so special because it is a source of faith and belief for our students.”

Ben Burton, Class of ‘23, who is also a member of Chabad’s student leadership, continued this theme. “The new building attests to more than Chabad as an organization; it attests to Chabad as a home. Going to Chabad is the closest I get to being at home. The Elkans have enabled us to build our own niche community here,” he said.

“This moment has been a long time in the making,” Rabbi Shlomo said, thanking all those who made the new building and Chabad at Oberlin’s day-to-day operations possible, including the family of the late donor, Mr. Alfred Bader, who after his rescue from the Holocaust made a commitment to do whatever he could to create a safe space for Jewish students on campus. “There have been Jews in Oberlin for at least a hundred years, and during that time many wonderful Jewish organizations have serviced Oberlin’s Jewish students, but this is the first  time since the inception of the college and the town that the Jewish community have a home of our own.”