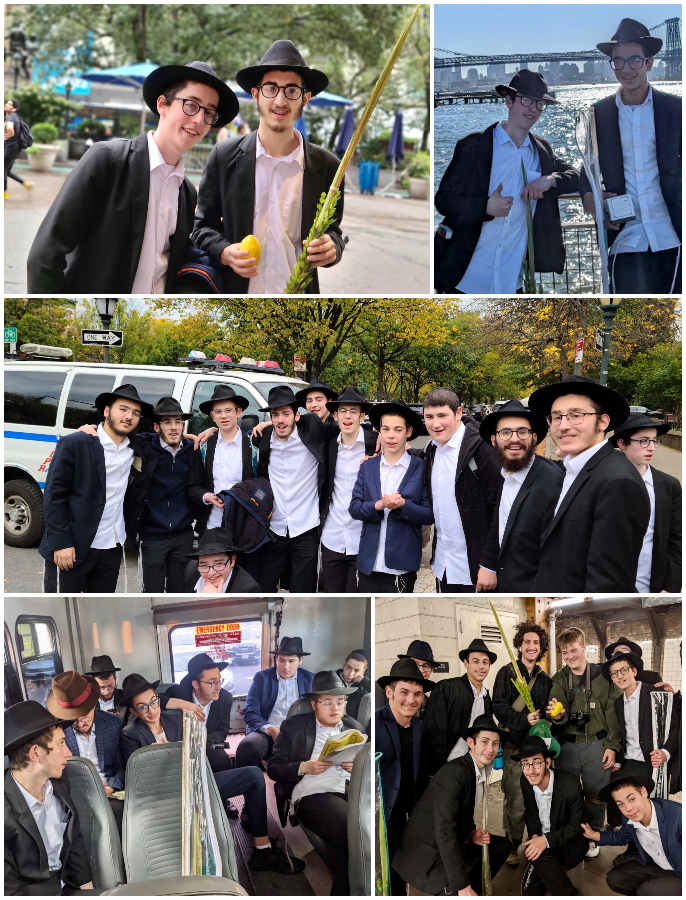 Following the overwhelming success of last year’s inaugural Tishrei with the Rebbe trip, CGI UK arranged another trip this year with even more campers in attendance.

Following the overwhelming success of last year’s inaugural Tishrei with the Rebbe trip, staff of CGI UK Masmidim this past summer were determined to continue the tradition, hoping to even make it better than before. But nothing prepared them for the enthusiasm they encountered from the bochurim as Tishrei loomed closer.

During camp, the boys participated in an exclusive mivtza, learning sichos, going to mikvah daily, learning Chitas and Rambam, and more, with many bochurim starting – and continuing! – certain Chassidishe hanhagos that they were not accustomed to until now. However, as a counselor testified, “It was visible by all of the bochurim, that the entire drive of their participation, was the grand prize – a ticket to come to the Rebbe for Tishrei.” As the excitement built up, the staff decided to maximize it by raffling off not only one but two tickets to the Rebbe! And a spontaneous decision on the final day of camp brought it up to three.

As the weeks after the summer went by, and Tishrei came ever closer, the calls started pouring in from parents and bochurim alike. “Is there a Tishrei program happening this year? Is there still space? What day is the flight?” Staff on this side of the pond, directed by Rabbi Folly Dubov, who were already working on the project, realized that they weren’t just going to exceed the numbers of last year’s trip. They were going to double, triple, and maybe more. The Hakhel hype was infectious, and everyone wanted in.

The dedicated staff worked tirelessly to adjust their arrangements to accommodate the rapidly-growing group, arranging places to eat, sleep, and activities, and Boruch Hashem it all came together in time, completely ready with a week-long program by the time the bochurim arrived.

At last, on Wednesday, the first day of Chol HaMoed, the bochurim took off from London Heathrow Airport, and upon landing in JFK, they were met by a welcoming committee of their staff members. Not wasting any time, they made their way straight to Crown Heights for supper and maariv, after which they joined a fiery farbrengen with veteran shliach and mashpia Rabbi Nosson Gurary. They continued the night dancing by Simchas Beis Hashoeva, and then happily retired to their spacious quarters for some much-needed shuteye.

The next morning, and the following ones as well, the boys were treated to mezonos far’n davenen, and then they had the great zechus to daven in the Rebbe’s shul – 770 (as well as all the other tefillos throughout their stay), followed by a lavish breakfast in the Slavin family’s sukkah near 770, after which they set out for a day of mivtzoim and enriching activities.

Between other things, the bochurim did mivtzoim at the Empire State Building, visited the Rebbe’s house, attended the community-wide Mega Hakhel event together with many other thousands of Chassidim, and soaked up the sights and sounds of Tishrei with the Rebbe.

Part of being in Crown Heights, especially during Tishrei, is taking advantage of the multitude of prominent personalities and benefiting from the treasures they have to offer. Over their stay, the bochurim had a chance to spend time and farbreng with various rabbonim, mashpiim, etc., including Harav Yosef Braun, Rabbi Moshe Kotlarsky, Rabbi Shimmy Weinbaum, Rabbi Shimon Rivkin, Rabbi Mendel Gordon, Rabbi Noam Wagner, Rabbi Moshe Silman, among others.

On Sunday, Hoshana Rabbah, after staying up late the previous night to say the entire Tehillim as is the minhag, the group took a trip to the Ohel, for some of them the first one in their lives. Before they left, they were addressed by Rabbi Nechemia Deitsch, shliach in Toronto, who impressed upon them the importance of communicating with the Rebbe, how the Rebbe can and does still channel us brachos nowadays, and the power of a visit to the Ohel to accomplish the above.

The jam-packed schedule of Chol HaMoed came to a climax in the electrifying 48 nonstop hours of Shemini Atzeres and Simchas Torah in 770. The unparalleled energy made a deep impression on many of the bochurim, who had never witnessed such an atmosphere of achdus and chayus amongst Chassidim.

“Seeing the tremendous hatzlacha that we experienced this year, with the unexpected turnout, showed us that all the effort we put into the multiple trips throughout last year was really worth it,” remarked Mendel, one counselor who was involved in both this year, as well as last year’s programs.

Thank you to the following individuals for making this program possible:

Rabbi Folly Dubov for helping direct the program, and for his valuable advice and support. Rabbi Shmuli Brown for all of his support and encouragement. Rabbi Michoel Slavin and family for graciously making their Sukkah available whenever necessary, and for all-around help. Rabbi Dovi Sperlin for providing a beautiful, spacious apartment to host the bochurim. Thank you to the following devoted CGI UK staff: Shua Slavin, Yisroel Schapiro, Mendel Lein for organizing and directing the program and finally to; Levi Aisenbach, Mendel Goldstein, Yosef Lubin, Mendel Oster, Nosson Potash, and Yanki Strassberg.

You can kindly donate at www.gofundme.com/f/tishreibytherebbe