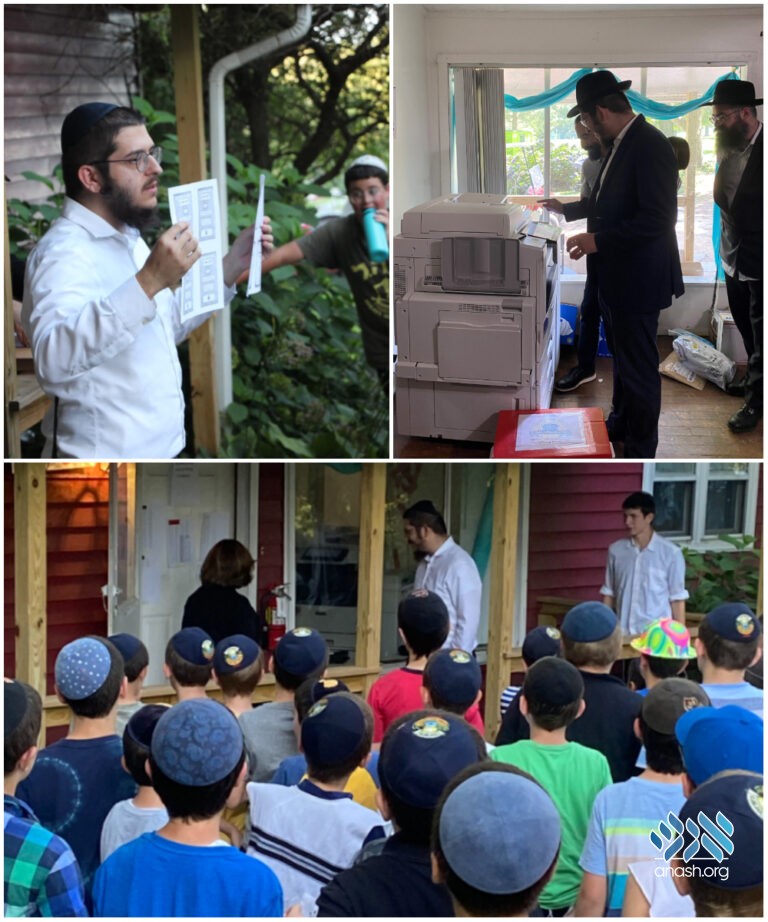 Campers and staff of CGI Toronto gathered for the 7,731st printing of the Tanya at their temporary campsite in Darlington, Maryland, where they have relocated to due to Covid this summer.

Hashgacha pratis set the stage for the printing of the Tanya in Darlington, Maryland.

Camp Gan Israel Toronto was forced to relocate this summer from its home in Halliburton, Ontario due to Covid.

Last year, the Canadian government permitted day camps to operate under strict guidelines, but no allowance or consideration was given to overnight camps.

With bated breath, Yitzchok and Goldy Grossbaum, directors of the camp, waited all year for government guidance with respect to opening camp for summer 2021 but regrettably the government regulators remained uncommitted until June. However, with an enrollment of campers from all over the world, a decision had to be made no later than April.

Being cognizant of the impact overnight camping has on youngsters, especially for young shluchim who live in isolated communities, the administration was committed to operating the camp under any and all circumstance. They could not disappoint the campers and staff again, and were keenly aware of the significance the Rebbe placed on overnight camping.

Mid February, when the Canadian situation still looked bleak, the directors began searching for a suitable campsite in the U.S. After visiting a few cities and sites, they selected one in Darlington, MD. Despite the huge costs and the challenges this would present, the directors forged ahead with conviction and determination.

Currently, a few weeks into the boys’ season, the camp’s medical director, Avremel Okounev, from New Haven, CT, realized that a Tanya was never printed in the city of Darlington, MD.

The first person he called was Shmuel Jacobson who emailed the files, facilitating and expediting the entire procedure. “The hatzlacha would not have occurred without him,” Avremel emphatically stated.

Avremel then went full steam ahead. He raised the money, got the printing presses rolling and had the Tanya bound in Monsey, N.Y. Within three days the project was executed, with the assistance and financial support of head counsellor Shlomy Ceitlin, Shmuli Kaplan and Mendel Mockin, BMD director Moshe Harlig, learning directors Dov Popack and Dov Slavin and the rest of the head staff, Avremi Vaisfiche and Moshe Farkash.

CGI hosted the printing inauguration celebration on Sunday evening after Mincha. Mrs. Esther Grossbaum, who spent considerable energy at camp ascertaining that everything flowed seamlessly, was honored with commencing the printing process.

After the campers recited pesukim, Avremel Okounev shared a few words about the significance of printing Tanyas and the Rebbe’s request to print them wherever possible.

“We are camping in the 7,731st city where a Tanya is being printed, and hopefully the final one prior to Moshiach’s arrival,” Avremel noted. He recalled his fond memories as a camper when a Tanya was printed in Haliburton. Cheers and clapping ensued as Avremel told the assembled that each person will receive a Tanya.

He then introduced the camp Rabbi and Mashpia, Rabbi Menachem Schechter from Chicago, who taught Perek Lamed Bais from the freshly printed pages.

Staff and campers alike eagerly await the Gala Banquet early next week when they will be gifted the Sefer.

“This edition of Tanya was dedicated in honour of the Antebi and Cohen Families of Toronto and the Gorowitz Family from CA, who graciously and generously contributed funds to help ascertain that CGI Toronto could once again provide a meaningful and enjoyable summer to the staff and campers,“ said Rabbi Yitzchok Grossbaum.