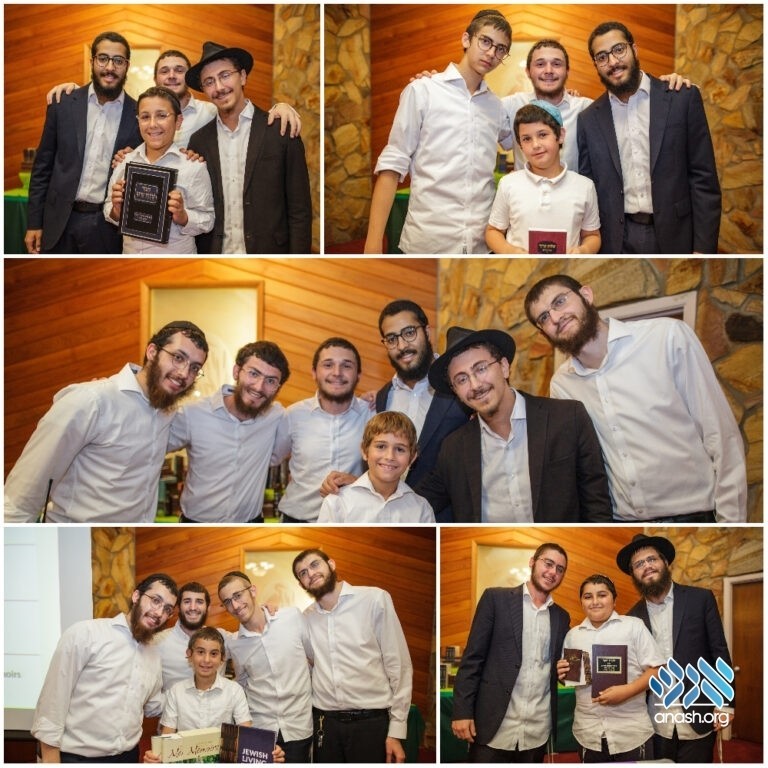 Tens of thousands of lines of Mishnayos and Tanya Baal Peh were studied collectively by the campers at CGI Florida over the past summer. On the last Friday of camp, campers and staff gathered to celebrate the achievement.

On the final Friday of the summer campers and staff gathered to celebrate the achievements of all campers as part of their 17th annual MBP, or Mishnayos Be’al Peh, Award ceremony.

Following an introduction by camp’s Learning Director Mendel Deitsch the campers were congratulated on their collective summer achievements – the camp’s gift to the Rebbe: 2 full Mesechtos, 118 Perakim Mishnayos, 1,439 Mishnas, 41 Perakim Tanya and 5,954 lines of Tanya.

A total of61,300 lines of Torah. The total lines of Tanya and Torah surpassed the achievements in those categories from the past five summers (and this does not include what was learned in the final days of camp!)

This was followed by a video of the Rebbe accepting similar gifts from Chassidim in the past. Campers with the highest amount of points were then honored: 1st Place: Mendel Wolff; 2nd Place: Menachem Biton; 3rd place: Eli Schurder, Shimmy Rubashkin & Chaim Aryeh Brody.

Each camper was then called up to receive the sefer or seforim they themselves chose from the camp’s very own seforim catalog, based on their final point total. Accompanying them to the stage was a multimedia presentation, displaying their name, total points, major learning achievements, and seforim they would receive.

A special thank you was given to Rabbi Yossi Teleshevsky of chabadkid.com for the modification and use of his Mishnayos Be’Al Peh online system used by several schools this past year, allowing CGI Florida to be the very first overnight camp to bring MBP into the digital age. It facilitated the process for testers to enter the information campers were tested and allowed campers and staff, at any given moment, to know what each camper was tested on, his current point total, and place within the entire camp.

A special hakoras hatov was given to Rabbi Dovid Zirkind of baalpeh.org whose database enabled the tracking of each camper’s progress throughout the past 16 summers, and to Rabbi Sholom Heidingsfeld of Cheder Menachem, LA, for his involvement in camp’s MBP Handbook.

The administration and camp staff of Camp Gan Israel Florida, under the leadership of Rabbi Yossi Biston and Rabbi Yossi Goldblatt, wished all campers increased success in their limudim. It is their hope that the campers’ accomplishments and achievements continue into the school year, give much nachas to the Rebbe and as explained in the Rebbe’s Sichos, bring about the revelation of Moshiach Now, as it is written: אין כל הגלויות הללו מתכנסות אלא בזכות המשניות