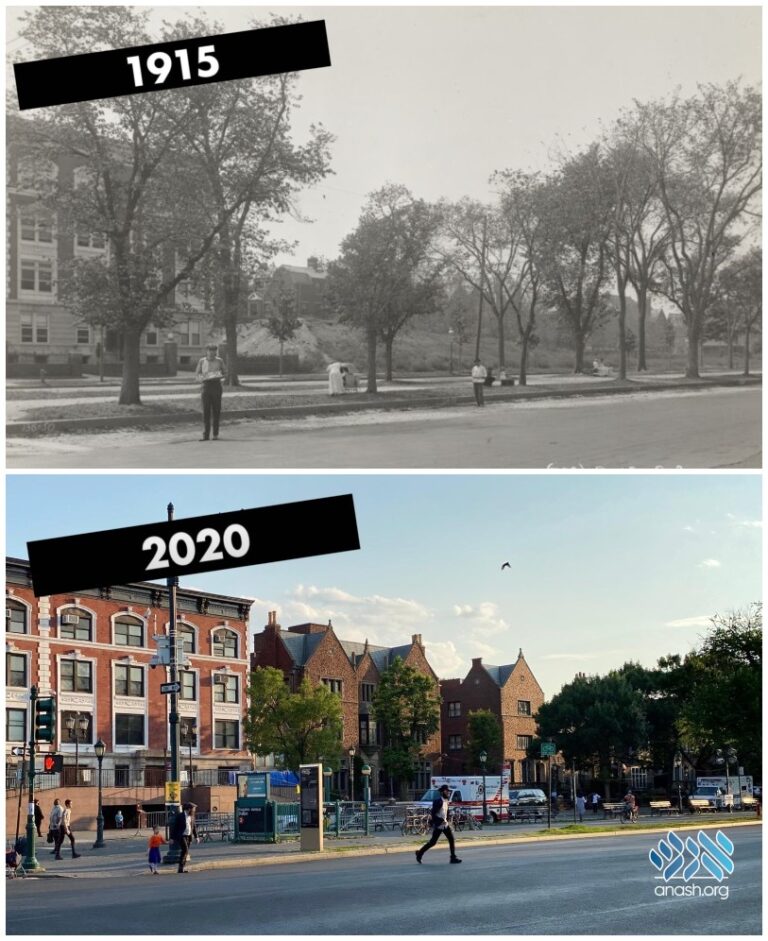 Recently uncovered photos from 1915 show the land that 770 now stands while it was still just a grassy hill, shedding light on the history of the now world famous building.

Photos recently uncovered from a vast treasure trove show the land which is now 770 Eastern Parkway when it was still just a grassy hill.

The photos were taken while the 3 and 4 subway lines were being built, and captured scenes in Crown Heights and other areas at the beginning of last century. A first series of photos was taken in 1915, before the start of the construction, and a second set was taken a year later, while the constriction was underway.

The photos were discovered in the vast collections of the Brooklyn Historic Society by Shloime Weinstein, a young Lubavitcher history buff, almost by mistake.

“As a hobby, I enjoy searching for old pictures of New York,” he told Anash.org. “When I discovered this collection, I began looking through it, and when noticing these few pictures, my eyes lit up.”

The photos show Eastern Parkway between Kingston and Brooklyn, the area that would later become world famous for housing ‘770’ – Chabad World Headquarters containing the Frierdiker Rebbe’s house, the Rebbe’s shul and the central institutions of Chabad Lubavitch.

After finding the historic photos, Shloimy went to Eastern Parkway and recreated the pictures, snapping shots of the same areas as they appear today. The contrast is stark.

“To give a perspective of the time gap, it is worth noting that the pictures were taken in the year of the Rebbe’s bar mitzvah,” Shloime said.

Others noted that the pictures were taken a few months before the Rebbe Rashab left the town of Lubavitch in Russia, setting in place the movement of Chabad headquarters from one location to the other, until finally arriving in the United States in 1940.