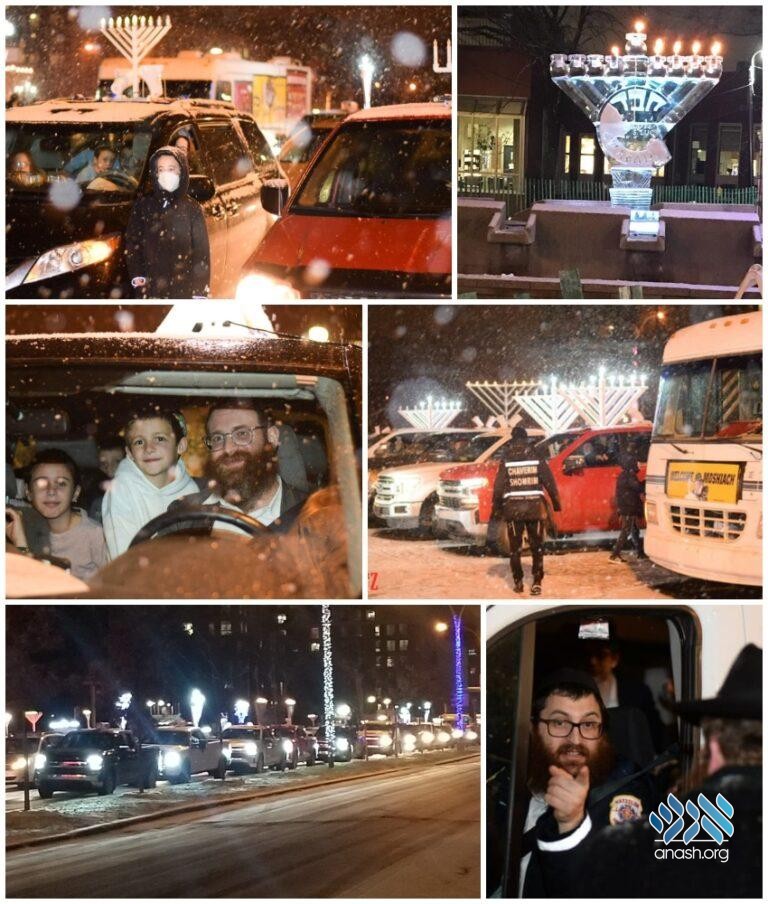 A Drive- In Chanuka event was held in Côte S-Luc, Montreal, where Mayor Mitchell Brownstein lit a giant ice menorah, followed by an 85 vehicle Menorah parade that lit up the streets and warmed the hearts of local residents.

The annual Car Top Menorah parade lit up the streets of Côte S-Luc and beyond. It warmed the hearts of so many to see over 85 vehicles driving through the streets accompanied with Chanukah music.

Many city residents rushed to their windows with excitement, dancing along to the musical beat from the safety of their homes.

With much thought and precision, with the encouragement from the mayor, the consent of the government officials, the cooperation of the CSL security team and the police team of station 9, Beth Chabad of CSL organized a Drive- In Chanuka event.

Mr. Jeff Goodman of Quartier Cavendish graciously agreed to use the parking lot directly facing the city hall. A truck with screens on all sides was placed in a strategic area in the parking lot for all to see.

Children enjoyed with Chanukah gifts, doughnuts and a fascinating animated video designed for their entertainment. The highlight of the event was watching Mayor Mitchell Brownstein light up the grand and magnificent ice menorah.

As if planned, there was a spontaneous outpour of love, pride and excitement expressed in the form of 200 cars, honking their horns in unison.

Special thanks to Mayor Mitchell Brownstein and the City Counselors, Captain Danny Diotte, Phillip Chateauvert, and all those who came out to celebrate and proclaim their Jewish pride. And especially to Rabbi S.B. Sternberg and Rabbi Levi Naparstek for orchestrating the parade.