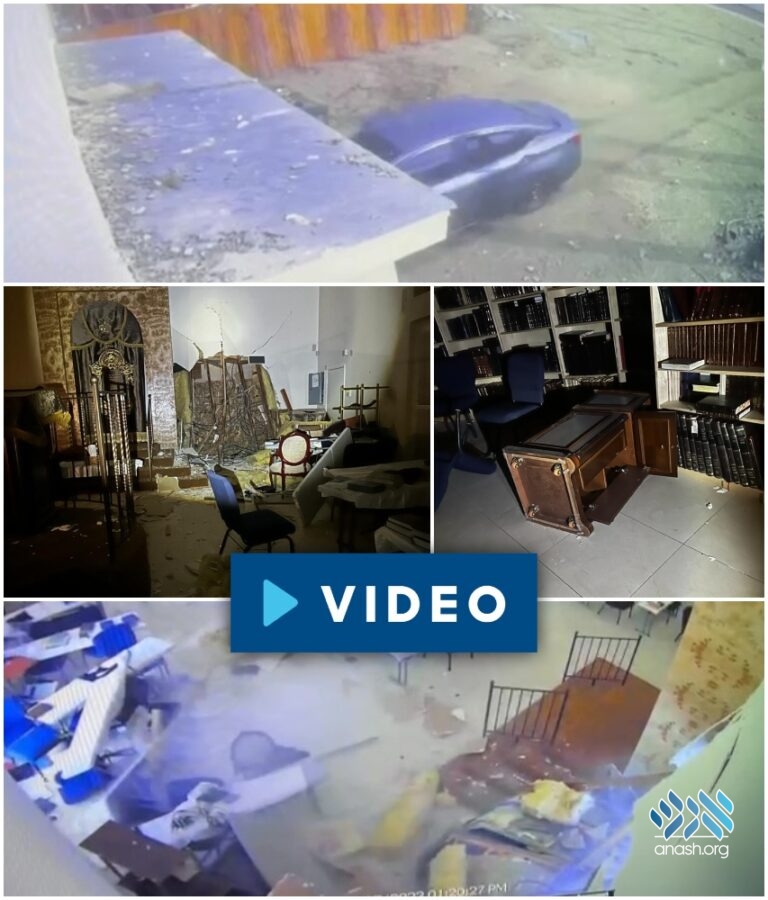 A driver slammed his vehicle into the Chabad of Palm Springs shul on Shabbos, with the vehicle crashing directly into the shul and causing significant damage. No one was injured.

A driver slammed his vehicle into the Chabad of Palm Springs shul on Shabbos, with the vehicle crashing directly into the shul and causing significant damage. Fortunately, no one was injured in the accident.

The accident occurred on Shabbos morning just after davening was over, as Palm Springs shliach Rabbi Yonason Denebeim and another individual were still in the shul. The errant vehicle caused massive damage to the shul located on East Palm Canyon Drive.

The driver was not seriously injured, but mispalelim were unable to daven in the shul for the remainder of the day, and shalosh seudos had to take place outside.

The car hit the exact spot where the Satmar Rebbe, Rav Aharon Teitelbaum, stands by davening during his annual vacation to the town – which was scheduled to begin on Sunday, the day after the incident.

The Satmar Rebbe davens in the Chabad of Palm Springs on weekdays when in the town and has his own minyan on Shabbos.

The Palm Springs Fire Department and Police responded promptly and professionally, and their initial understanding is that the Chabad House was not targeted in any way. The detectives at the Palm Springs Police Department are continuing their investigation into the accident. In the meantime, without any clear criminal intent or overt signs of intoxication, the driver is free to go home, while community members have been left to pick up the pieces.

The Chabad of Palm Springs community is working diligently to restore and rebuild the damage to the synagogue. After briefly moving to a private residence in Palm Springs, regular daily services have resumed at the synagogue, after it was declared structurally sound by the City Building and Safety Department on Monday. Electrical power has also been restored to the building, without the use of a generator.

This accident is only the most recent, and most serious, in a spate of incidents to impact the community. Over the past three years, the Chabad House has been the site of an arson attempt, an assault on a rabbi, and multiple acts of vandalism that have incurred tens of thousands of dollars of damage – in addition to encroachments and minor damages to the property made by homeless persons. In all of these cases, police have been unable either to identify a culprit, or to recover damages from offenders.

“It is unclear whether any of these incidents have been linked, and in most of them no clear anti-Semitic motive has been articulated. Regardless of motive, these events underscore the substantial challenges and costs involved in maintaining a prominent house of worship in Palm Springs, and indeed any business or non-profit enterprise with a physical presence in the city. We are all the more grateful for the support of the police, the municipality, and the broader community,” a member of the Chabad House’s administration said.

“Despite these incidents, the Chabad of Palm Springs community remains strong and optimistic, and was already in the process of making several important refurbishments and repairs to the shul,” they said.

“Now, we are more committed than ever to serving as a flourishing home for Jewish life for the entire Coachella Valley,” says Rabbi Arik Denebeim. “On a lighter note, I’d also add that the doors to Chabad of Palm Springs are never closed, so there’s really no need to come through the wall!”

To contribute to the repair effort, please visit here.