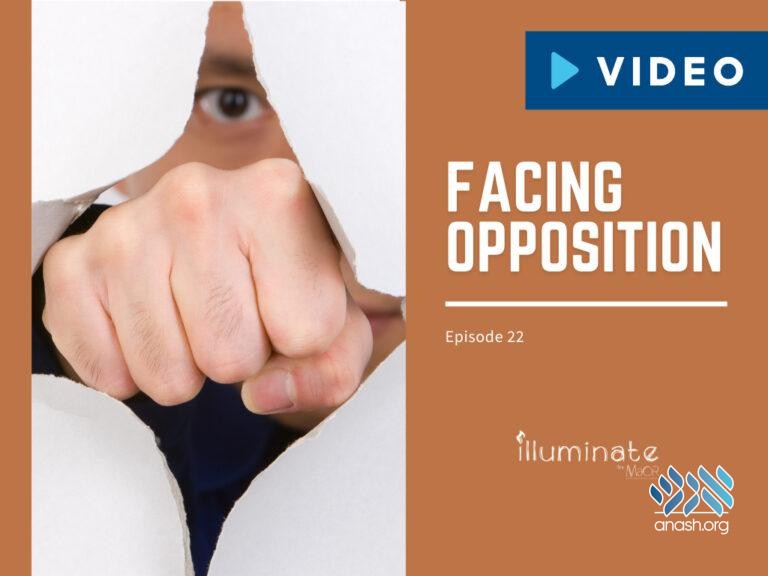 Watch: Opposition and criticism can crush a good idea before it has a chance to flourish. This episode of “Life Lessons from the Rebbe” addresses how to deal with opposition while standing up for what’s right.

When it comes to standing up for the truth, no matter how controversial it may seem to the world, the Rebbe’s message is clear: we must not be bothered by obstacles. But how do you forge ahead when everyone is against you?

Two of the most influential Jewish leaders of all times, the Rambam and the Alter Rebbe, set an example which we have much to learn from. Both were famed Talmudists and codifiers of Jewish law who also wrote and taught extensively on Jewish philosophy and ethics. Another commonality is that they both faced fierce opposition by contemporaries who unjustly accused them of heresy, resulting in persecutions, bans, and public burning of their books.

Within a generation however, the detractors of both the Rambam and the Alter Rebbe made a full turnaround and recognized that their claims were baseless, some critics even transforming into ardent followers and devotees. Both Torah giants are now held in the highest regard in all Jewish circles and their once-controversial works are studied and cherished by all to this very day.

How did they do it?

Upon analyzing letters they wrote to their disciples, we discover their winning formula: while addressing legitimate concerns posed to them by the opposition, they steered clear of personal conflict and power struggles. They pushed forward with their work and although it took time, eventually the truth prevailed.

As a matter of fact, most good ideas face controversy and resistance before achieving wide-spread acceptance. We must remember that right versus wrong, true versus false, and good versus evil are not determined by the court of public opinion, rather by guidelines set forth by our millenia-old tradition.

While we wait for everyone to get on board, we just need to keep forging ahead undeterred while pursuing peace and unity. Ultimately, the truth will prevail and opposition will make way for support.

Illuminate by Maor offers powerful presentations of the Rebbe’s timeless talks, fused with engaging narration and explanation. These weekly videos are bite-sized and simple to grasp, designed for learners of all levels. To subscribe, click here http://wa.me/16467700303?text=Subscribe or Whatsapp +1 646-770-0303.

Watch all past episodes here https://www.youtube.com/channel/UCPs_fLGrzpYunjDN1MR_edA/videos  .