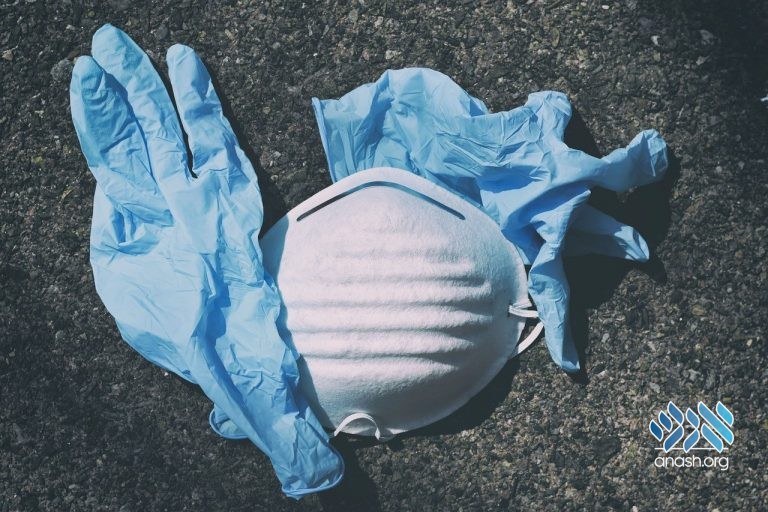 Many have been wearing gloves on the street as a precaution against coronavirus. Is one allowed to wear them on Shabbos? Rabbi Michoel Lerner answers the question.

By Rabbi Michoel Lerner for Anash.org

However, miderabonon some of these items are ossur to wear. One of main the concerns of Chazal were items that can easily fall off. They were concerned that if it indeed were to fall off, one would inadvertently and instinctively, pick it up and carry it. [There are other concerns as well, however they are not applicable in this case].

Therefore, in addressing any specific item, two steps need to be determined:

1) It has the halachic status of a malbush or a tachshit, thus permitting it to be carried min hatorah.

2) It does not easily become loose, thus permitting it miderabonon.

To address whether or not plastic gloves fit into this category, we seemingly need not look far. The Shulchon Aruch (Simon 301, 37) addresses the issues of wearing gloves during cold weather. All opinions agree that those gloves have the status of a malbush, since they protect one’s hands from being cold. This is similar to wearing a coat or a sweater. They are therefore definitely permitted to wear min hatorah.

However, there is an opinion (the Shibolei Haleket) which holds that it is ossur to wear miderabonon, since there is a possibility that one will remove the glove to scratch oneself and inadvertently carry it. The Shulchon Aruch paskens that due to this opinion, it is preferable not to wear them, and that is indeed the common custom.

The same logic can seemingly be applied to wearing plastic gloves on Shabbos. Since they protect one’s hands from coming in contact with virus particles, they should have the status of a malbush. In regards to the concern, that one would possibly remove them, this should not be an issue, since one can easily scratch oneself without removing the plastic gloves from one’s hands.

The concern is even more diminished, in light of the fact that the wearer is specifically wearing it, in order to be extra cautious in coming in contact with virus particles. Thereby making it less likely, they will remove the gloves to touch various surfaces.

However, seemingly this difference is inconsequential, since their direct purpose is to keep the hands clean. The wearer’s ultimate intent should seemingly not play a role. Even if this difference would indeed be proven consequential, there is another approach to explain why plastic gloves are muttar to wear, as will be explained.

There is another way to explain, how plastic gloves have the status of a malbush. The previous approach was based on the fact that the gloves protect one’s hands and are therefore considered a malbush. However, the definition of a malbush in the halachos of hotzoah – carrying, is actually quite broad. One is permitted to wear garments which are worn for other purposes, other than protection. Many garments are worn for style or modesty. For example, a necktie is not worn to protect one’s body from rain or cold, rather it is fashionable.

The general rule is, that anything which serves to benefit one’s body, is considered a malbush and a tachshit (Alter Rebbe SA, Simon 303, 17). However, if one is wearing the item to protect one’s clothing from becoming soiled, it does not have the status of a malbush (AR SA, 301, 10), since it is not being worn for the benefit of one’s body.

Case in discussion, is in regards to young girls piercing their ears, so that when they are older they can wear earrings. In order the hole should not close up, they would place in it threads or tiny chips of wood. The Mishna says, it is muttar on Shabbos for girls to go outside, with these wood chips or threads in their ears. This is somewhat difficult to understand; seemingly they are neither a malbush or a tachshit. Rashi explains that since it was normal to wear (at that time), it was not considered to be carrying. This din is codified in Shulchon Aruch (Simon 303, 20).

There is another case, brought in meseches Eruvin (Daf 95a), that brings out this point even stronger. The din is that if a pair of Tefillin were found outside on Shabbos and it can be disgraced there, a man is allowed to don the Tefillin in their normal manner, and then proceed to walk with them to a place where they can be safely deposited (Shulchon Aruch 301, 42). Now, Tefillin are definitely, not your typical Malbush (garment) – it does not (physically) protect your body nor is it worn for style. What is then the rationale behind this din?

The reasoning follows the same rationale mentioned before in regards to the ear piercing. Since Tefillin are normal attire for men to wear throughout the week, it is considered a malbush (Shabbos Daf 61a). For this reason, only a man is permitted to do this, however for a woman it is ossur, since this is not normal attire for her and therefore she would be considered to be carrying on Shabbos.

Let us return back to our original discussion. We can now provide another reason, why plastic gloves are permitted to wear on Shabbos. Being that currently it is very common for people to wear them in public, all around the world, they are now considered normal attire to wear. Therefore, even if you would not be using them for protecting your hands, it would be permitted to wear. It is not important as to why you personally decided to wear them, since it has become normal attire worldwide.