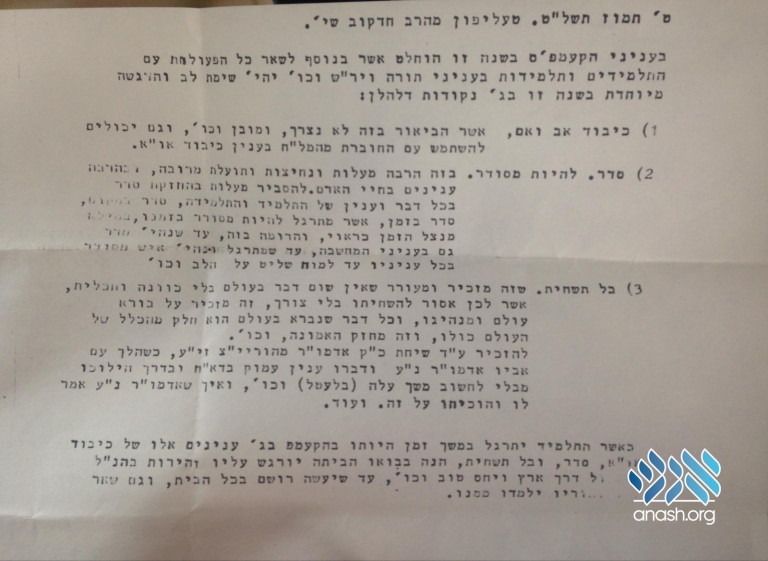 When we think of summer camp, we think of the tremendous benefits for our children who attend. The chayos in yiddishkeit, the shiurim, the lasting friendships – the list goes on. Most parents don’t expect to be the ones learning from their children’s camps.

Before the camp season of 5739/1979, Rabbi Hodakov shared a directive with camp directors which many believe came from the Rebbe, as was usually the case. In addition to being the Rebbe’s secretary, Rabbi Hodakov was the director of Merkos L’Inyonei Chinuch, under which Camp Gan Yisroel is operated.

On 9 Tammuz 5739, camp directors received a phone call from Rabbi Hodakov during which the following was related:

“Concerning the camps; it was decided that this year, in addition to all that the children will be taught about Torah and yiras shomayim, etc, there will be additional attention paid to the three following things:

“When the student becomes used to such behavior in camp in these three concepts, honoring one’s parents, being a mesudar, and not destroying things for no reason, these three traits will be apparent on him when he returns home after the summer. The entire household, including his siblings and parents, will be impressed with this good conduct, and will learn from him.”

When your kids come back from camp this year, pay attention to what they learned and observe their improved behavior. You may learn something as well!

Post Script: If you or someone you know was a camp director that summer and personally received this directive, please share in the discussion box below! We are especially interested in details on how it was given over, as well as anything else you remember about the unique instructions and how they were applied in camps.