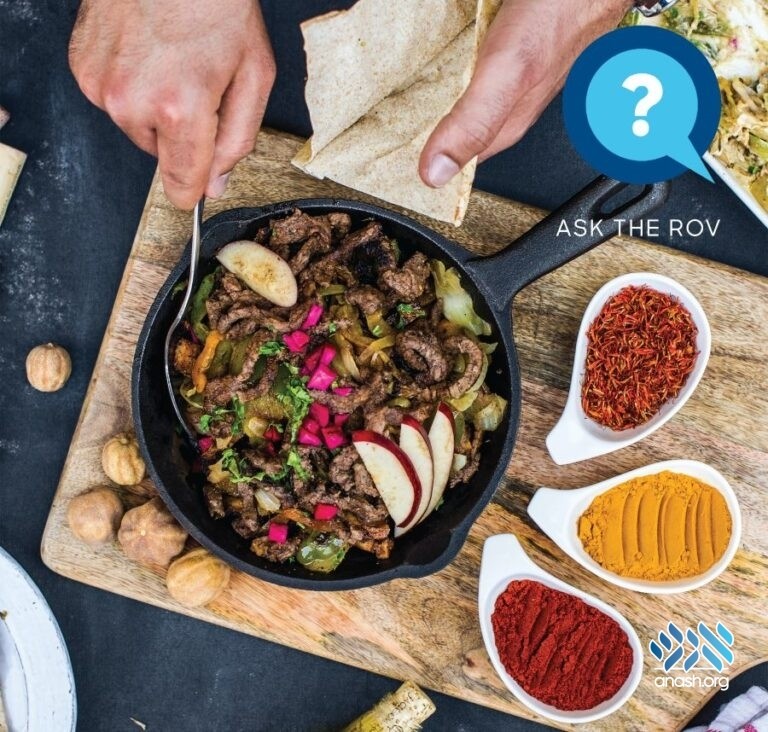 Ask the Rov: I bought a cast iron skillet smeared with oil. Must I kasher it before use?

Heavy-duty cookware made of cast iron is used for its heat retention, durability, and ability to maintain high temperatures for a longer time. Most cast iron cookware is pre-seasoned by the manufacturer to prevent rusting and to make it non-stick. The seasoning process involves coating the surface with an oil or fat, and heating to high temperatures (600° F) until the coating turns black.

While in the US the oils are generally not from animal sources, in remote countries they will sometimes use whichever type of oil is cheaper and available. The fats used in the manufacturing process are often already non-edible, and therefore the cookware would need not be kashered.1 Yet others hold that one should be machmir in case the fats were edible.2

Although 24 hours since the utensil’s use and the absorbed non-kosher taste is pagum (“stale”), nonetheless, one may not use such a utensil l’chatchila without kashering. Additionally, cooking sharp food — e.g. onions — can rejuvenate the pagum taste and render the cooked food non-kosher.

Kashering removes the taste from a utensil in the same way it was absorbed (kebolo kach polto). When non-kosher taste was absorbed directly into the utensil without any liquid in between, libun gamur is required to burn out the taste. This is accomplished by heating the metal until it turns red hot (i.e. sparking) or the top level shaves off.3

If non-kosher liquid was absorbed in a utensil, most poskim equate this to having been absorbed through liquid and it’s sufficient to do hagala (placing in boiling water) or libun kal (heating the metal so that a piece of paper touching the other side would get burned, which can be achieved by going over the entire surface with a blow torch). Some argue that since the non-kosher liquid was absorbed directly into the utensil, libun gamur is necessary.4

In practice, libun kal is sufficient. It is best to kasher from both sides, but if needed one can suffice by boiling it with water from inside.5 If the utensil was heated in the factory after the oil was smeared, they are considered to already have had a libun kal and are kosher. One who wants to be mehader and do libun gamur can place it in a self-clean oven and run the cycle.