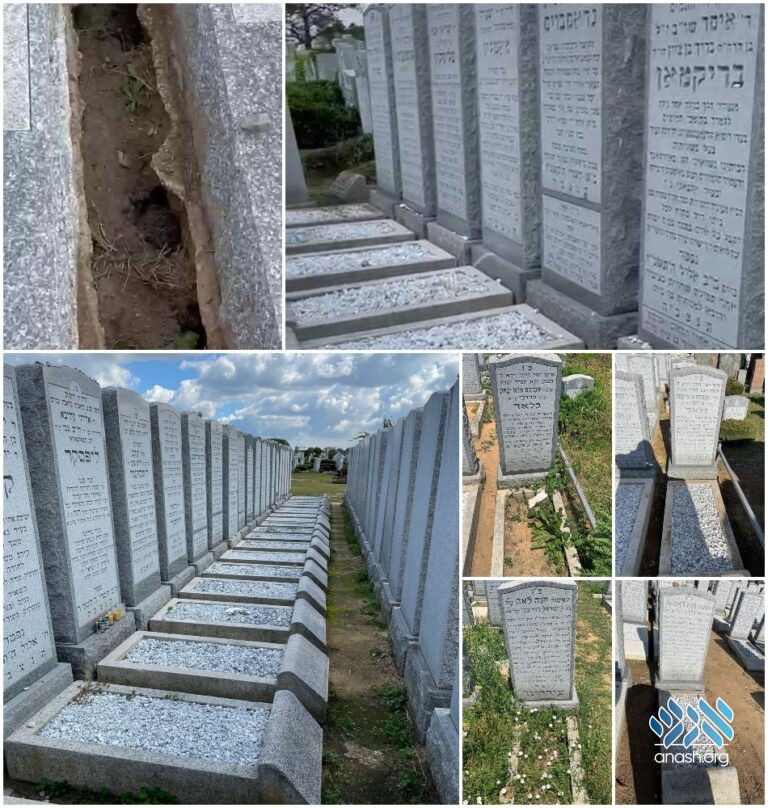 A group of Lubavitch businessmen sponsored and arranged an extensive upgrade for all Lubavitcher plots in Old Montefiore Cemetery, restoring, beautifying and repairing every grave.

Thousands of Lubavitcher kevorim at Old Montefiore Cemetery have been meticulously repaired, restored and beautified, thanks to an extensive project taking place under the radar.

The project, sponsored and arranged by a group of Lubavitch businessman, is spearheaded by R’ Shaya Gordon of Crown Heights. They have undertaken to visit every Lubavitcher grave scattered across fourteen plots in the large cemetery, and repair or beautify each one as needed.

Gordon says the idea came up during a visit to the Rebbe’s Ohel, located in the same cemetery.

“Besides for visiting the Ohel, I also visit the kevorim of relatives and friends nearby, and I noticed that many graves had overgrown weeds, matzeivos that are sunken into the ground, and I have even noticed mateivos that fell over and remain that way for extended periods of time,” he told Anash.org.

On one of his visits, he noticed that all of the graves in the plot surrounding the Rebbe’s Ohel had been tended to, with matzeivos straightened, weeds removed, and fresh sand spread.

“I asked Rabbi Abba Refson what had happened, and he explained that a donor had sponsored the work on over 100 kevorim in the Rebbe’s daled amos,” he said.

Hearing that gave him the idea to extend the project to every Lubavitcher kever across the entire cemetery.

“Every kever deserves to be clean, neat and respectable. Unfortunately, the high costs of upkeep had many of the kevorim looking far from that,” he told Anash.org.

After he rallied the support of a number of businessmen from the worldwide Chabad community, he contacted R’ Shimon Goldberg a member of the Lubavitch Chevra Kadisha, who had been fixing and cleaning kevorim in the cemetery, for those that can afford the cost, for some time. Once they received the permission of the Lubavitcher Chevra Kadisha and Agudas Chasidei Chabad, the project took off.

Each grave was tended to according to its needs. Some only needed weeds trimmed and a wash, some required the bed to be removed and the dirt refilled, some needed the matzeiva straightened and many other types of repairs. Each received a fresh layer of white stones, and a special product was spread to help stop weeds from growing around the plots.

“The project budget to date is over forty thousand dollars, with even the simplest facelift costing a few hundred dollars,” Gordon said.

“We are making sure to reach every Lubavitcher grave, including those that aren’t buried in the fourteen Lubavitcher chelkos,” he said.

Thirteen chelkos and many individual graves have already been tended to, and work is underway on the fourteenth chelka as well. The project also served as an impetus for others to tend to their family member’s kevorim and even pay to fix those of complete strangers, making the project’s reach extend even further.

Yet, despite all the time, effort and money invested, the group of businessmen is hoping that the impact from the project will be a short-lived one.

“We are waiting for Moshiach’s imminent arrival, at which point the beis hachayim will no longer be needed,” they said. “But until then, each chossid will be granted the proper respect they deserve.”

Photos and videos show the graves before and after the restoration work, including those paid for by families, and those covered by the donors.