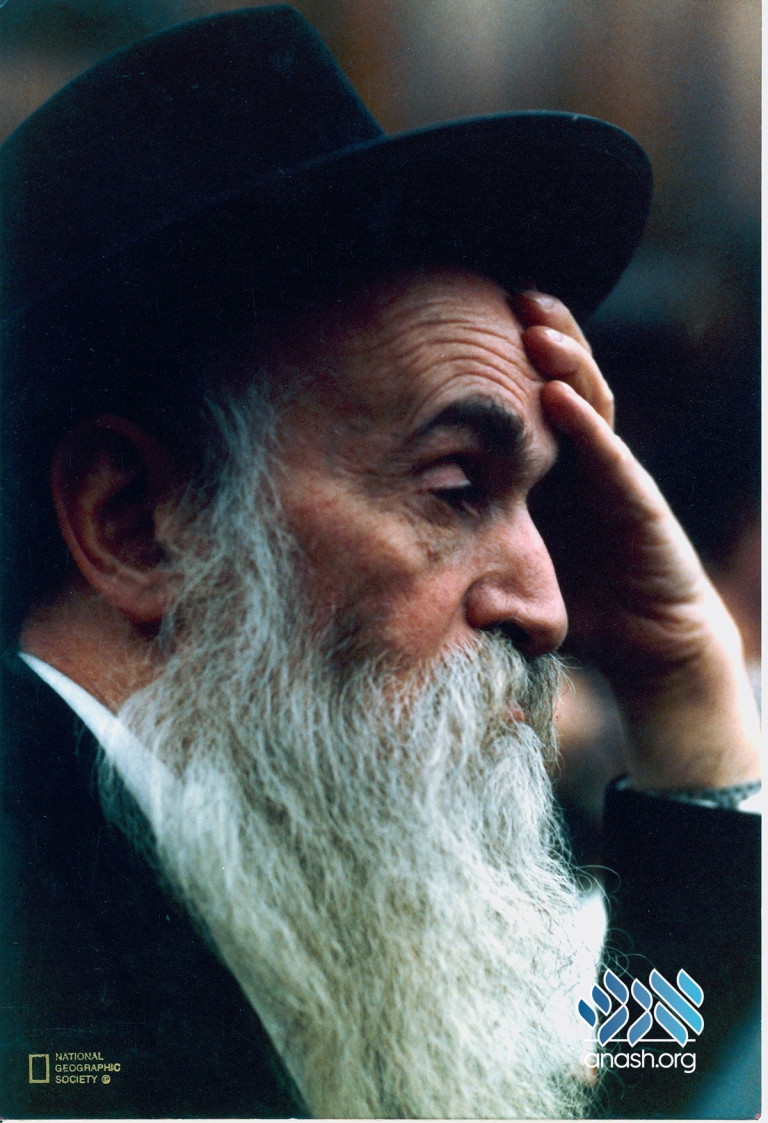 The gaon Reb Yosef Goldberg (“Yoske Tiraspoler”), whose yahrtzeit is on 22 Sivan, dedicated his life to Tomchei Tmimim, with close to four decades spent teaching and raising talmidim at the yeshiva in Brunoy. Many of the recent roshei yeshiva in Lubavitch were his talmidim in either Samarkand or Brunoy.

Reb Yoske was born in 5677/1917 and raised in Russia during the tumultuous times following the Russian revolution. His father, Reb Koppel the melamed, passed away when he was 6 years old. His mother, Rivka, had great mesiras nefesh to keep her children on the path of Torah, while struggling to feed and clothe them. She was especially dedicated to the chinuch of her only son, Yoske.

As a child, Yoske managed to avoid going to shkole, (Communist school) instead spending his time in the local shul. One day, a visitor saw the young child and commented that his place was in yeshiva; the child took his words to heart.

In the summer of 5687/1927 he finally convinced his mother to write to two yeshivos in Kremenchuk. Luckily, the Yeshiva Tomchei Tmimim responded first, and young Yoske was soon on his way there. When he arrived, he realized that the mood in yeshiva was one of deep melancholy. The Frierdiker Rebbe had been arrested and there was no word about him yet. Before long, however, the mood turned joyous, with the news that the Rebbe had been freed.

The next few years were tough for Yoske. The first zman was so difficult, physically, that the menahel Reb Yisroel Noach Blenitzky (Hagadol) was afraid that he would not return after the zman. He spoke to him, explaining to him the virtues of learning in Tomchei Tmimim and that it doesn’t come easy. Finally, young Yoske promised that he would come back. All his life, he was grateful to Reb Yisroel Noach for convincing him to return to yeshiva.

Despite his late start in learning, Yoske was sharp enough to catch up to his peers. During that period, the bochurim were always looking over their shoulders, hiding from the KGB and worrying about where their next meal would come from. After three years of relative calm, the yeshiva in Kremenchuk was closed down and the bochurim dispersed, with most of them, including Yoske, continuing on to Vitebsk.

Within a few months, it became too dangerous in Vitebsk. Yoske’s next stop was Kutaisi in Soviet Georgia.

In Charge of Yeshivos

After a few years in Kutaisi, Yoske once again found himself on the run. He left to Novozivkiva and, then to Karelevitz. At that time, it was decided that married men should no longer be in charge of the yeshivos, out of fear that their wives would remain agunos if they were arrested. Instead, bochurim would now be called upon to take up these positions.

Over the next four years, Yoske was put in charge of several yeshivos, until the summer of 5700/1940. Being in this position involved constant danger, traveling to other yeshivos and chadorim, and practically awaiting arrest, or an even worse fate. The bochurim in charge were undeterred by the constant threat; they knew that the whole of Tomchei Tmimim, and quite possibly, Russian Jewry, depended on them.

It wasn’t easy for Yoske to find a shidduch. He had one very strong condition, that the kallah wear a full sheitel, which was almost unheard of in Communist Russia. Nevertheless, he would not budge, and in the end, he found a kallah who was ready to take this upon herself.

In 5700/1940 Yoske married Tzivia Katznellenbogen, daughter of Reb Michoel and Sarah. Her father had been arrested and shot two years prior. Her mother, known as the mumme Sarah, helped countless chassidim escape Russia.

Later in London, Tzivia’s brother, Reb Moshe, recounted how his brother-in-law got him excited about learning. Young Moshe would play “games” with the chosson by testing him on any of the “yeshivishe” mesechtas. Yoske knew the gemarahs inside and out.

After he got married, Reb Yosef moved to Leningrad. Before long, every available man was being pulled off the streets and drafted into the Soviet Army. Through great miracles, he was he saved from almost certain death.

In the fall of 5702/1941 the Nazis were approaching Leningrad. He foresaw the danger and convinced his extended family to flee to Samarkand on one of the last trains out. On the long train ride east, he saved their lives, keeping them from freezing and starving to death.

In Samarkand, he worked hard to feed his family and others, while giving shiurim at night to anash. His brother-in-law Reb Moshe once remarked: “ר’ יוסף האט אין סאמארקאנד אסאך געלערענט, אביסל געהאנדעלט און בעיקר געהונגערט.” (Reb Yosef learned a lot, did some business and mainly starved in Samarkand.)

Finally, in 5706/1946, Reb Yosef was able to join the hundreds of chassidishe families that left Russia through the eshalaonen, the wagon trains, by acquiring false Polish passports. Many of these papers were arranged by his shvigger, the mumme Sarah, while she herself remained in the Soviet Union, where she was arrested.

He soon arrived in Pocking, where he once again joined Tomchei Tmimim as a teacher. In 5708/1947 most of anash moved on to Brunoy, and Reb Yosef joined the yeshiva faculty there. Reb Pinye Korf, who was his talmid during that time, would say, “At times, the mood was relaxed and at times the mood in class was more strict, but one thing we always did was learn!” This was the beginning of almost four decades of teaching bochurim.

As a bochur, he had been advised by Reb Avrohom Mayorer to learn the sefer Shev Shma’atsoh and review it well. He would take long walks for health reasons and during that time he’d review the Shev Shama’atsoh until he knew the sugyas inside and out. Throughout his life, he had a very strong geshmak for this and other seforim by the same mechaber.

His talmidim and family members speak about his great love of Torah. He would walk around the courtyard of yeshiva totally oblivious to his surroundings, reciting the sugya to himself and gesticulating, as if to say that this sevarah is incorrect. He’d wake up in the middle of the night and go over to the bookshelf, look into a tosfos and return to his bedroom.

Rabbi Heschel Greenberg of Buffalo says that, despite being in Brunoy only for a short time, his geshmak in learning came from Reb Yosef. He was a living example who didn’t just talk the talk. He lived it and instilled it in his talmidim.

Reb Moshe Niselevitch recounted the way Reb Yosed baked matzos on Erev Pesach in the relative safety of Samarkand. “The tziyur (scene) of Reb Yoske rolling the dough, the sweat falling across his forehead, is something I shall never forget. After years of suffering and fear, he was finally able to do a mitzvah in peace. This brought him great joy.”

Devotion to the bochurim

The Shanovitch brothers, yblcht“a Sholom Ber and Azriel, a”h, were from Odessa and talmidim of Reb Yosef in the yeshiva in Kutaisi. When the war broke out in 5701/1941, they were told by those in charge of the yeshiva’s gashmiyus to go home. In an uncharacteristic move, Reb Yosef refused to send them home, saying “My job is to accept bochurim who want to come and learn, not to send them away from yeshiva.” Not sending them back to Odessa is what saved their lives. The rest of their family was murdered by the Nazis, together with most of the Jews in Odessa, HYD.

His devotion to the bochurim was tremendous. He would sit for a long time after delivering his shiur and talk to them. If he saw a bochur who had a hard time following along he would offer to learn with him in his spare time, between five and six in the morning. Many bochurim did take him up on that offer.

Even after suffering a heart attack, he continued devoting extra time to the bochurim, despite his family’s pleas that he rest. If he was too weak to leave his bed, the bochurim would come to him!

Eventually, his weak heart caught up with him, and he often found himself unable to continue saying a shiur because of the pain. Once, upon entering yechidus with the Rebbe, he asked the Rebbe what he should do. Should he cut down on the frequency of the shiur? The Rebbe told him to continue giving the shiur just as often, but to take small breaks – thus allowing himself to regain his strength, as well as for the bochurim to review the shiur. The Rebbe added that cutting down on the frequency of the shiur would have the opposite effect, it would weaken him further!

When the Moroccan bochurim arrived to Brunoy in the 50s Reb Yosef devoted himself completely to their advancement and success. He would give special shiurim to them in Hebrew, which he had picked up during his years in Georgia.

Both the Frierdiker Rebbe and the Rebbe wrote in their letters to him that he should be successful in implanting yiras shomayim in the bochurim. This language was generally reserved for a mashpia and not a Rosh Yeshiva. Reb Yosef took that role very seriously, and made sure that the bochurim knew that he was always available to speak to any of them about any topic.

Reb Yosef’s derech halimud in teaching the bochurim followed the method that he learned from his Roshei Yeshiva, Reb Yudel Eber and Reb Avrohom Mayorer, and the way it was taught in Lubavitch. It involved delving into the sugya at hand, remaining fully engaged until it was clear. No pilpulim or incorrect sevaros were permitted; he never allowed bochurim to stam speak “in di luften,” in the air, with no basis. His main goal in teaching bochurim was to give them a strong foundation in learning Torah.

Finally, in Tishrei 5719/1958, he managed to travel to New York to be by the Rebbe for Tishrei. There, he was reunited with many of his old chaverim, and saw for the first time what an American chossid looks like. The Rebbe instructed him to farher the bochurim and speak to them in learning.

After Reb Yosef suffered a heart attack, he began to prepare himself to leave this world by writing a will and annulling any vows he may have made. Thankfully, he recovered. After Reb Nissan Nemanov passed away in 5744/1984, he was asked by Reb Binyomin Gorodetzky to take over the financial burden of the yeshiva as well, saying that if Reb Nissan could worry about gashmiyus so could he! He accepted the role, even traveling all the way to California to raise money.

During last Pesach he was quite weak, but insisted on eating the matzoh and maror as halacha requires. His son-in-law Reb Yitzchok Klyne recalls sreifas chometz that year: “He was standing by the fire crying bitter tears as, though he realized that this would be his final chance to burn the chometz,” he said.