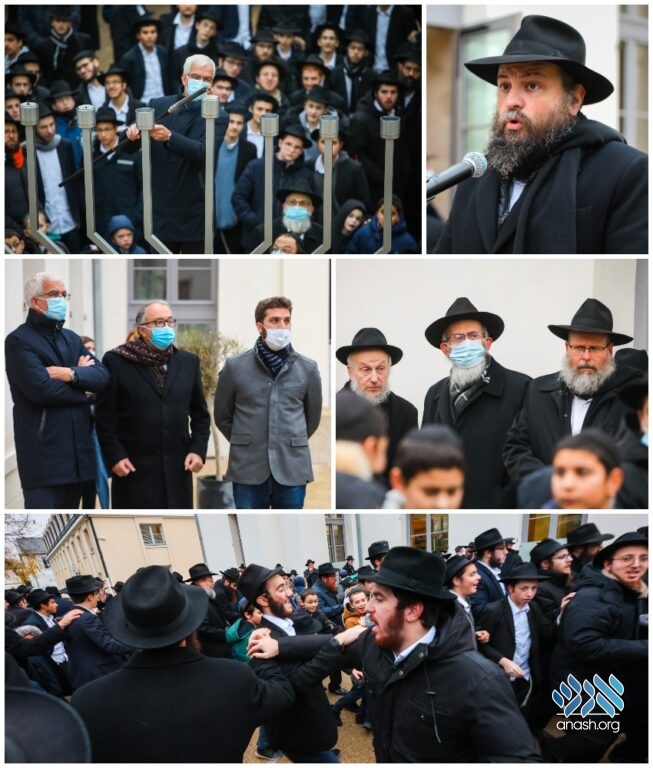 A grand Menorah lighting was held at the Brunoy Yeshiva on the third candle of Chanuka attended by the mayor and local dignitaries. Mayor Bruno Gallier spoke about the personal sense of commitment he feels toward the Yeshiva.

A grand Menorah lighting was held in the yard of the Brunoy Yeshiva on the third candle of Chanukah. The lighting was arranged by the yeshiva and the community and was attended by the Mayor of Brunoy and friends of the yeshiva.

The lighting ceremony was led by Rabbi Shmuel Brodowicz, maggid shiur in shiur Alef Mesivta, who praised the warm connection between the Brunoy Jewish community and local government officials.

Mr. Bruno Gallier, Mayor of Brunoy, spoke about the sense of personal commitment he and other members of the municipality have for the Jewish community. “The yeshiva was established here 74 years ago, and it symbolizes the menorah,” he said excitedly, “The Yeshiva shines everywhere, and each year it shines even more than the previous year.”

Director of the Yeshiva Rabbi Mendel Gurevich, presented the dignitaries with gifts in honor of the celebration.