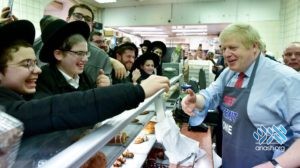 The prime minister was serving customers as photographers snapped his work and local Tory candidate Mike Freer was behind him on a campaign stop that saw him visit Jewish Care earlier the same morning.

Taking to Twitter after the trip to Golders Green, Johnson wrote that he had made “some ‘Get Brexit Done’ donuts at a wonderful bakery in Golders Green.”

“Thank you Grodzinski Bakery & to everyone who stopped by to say hello,” he added.

Labour Party leader Jeremy Corbyn has been accused of failing to take antisemitism within his own party seriously, leading to a public rebuke from Chief Rabbi Ephraim Mirvis. He also regularly compared Israel to Nazi Germany and attended gatherings where terrorists were present.

The UK general election will be held on Thursday Dec, 12.