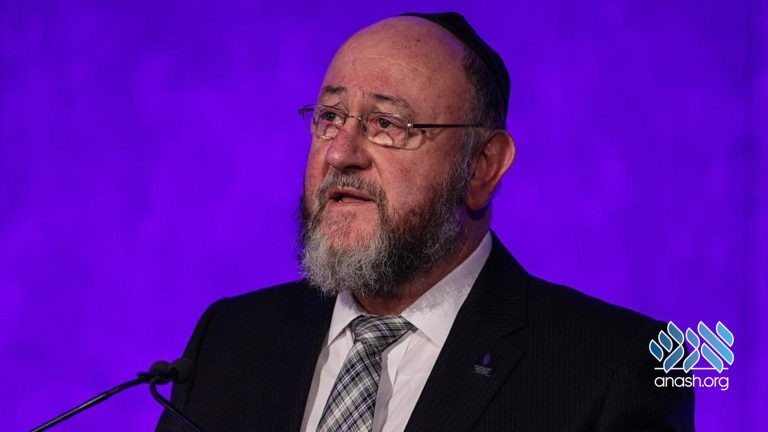 Chief Rabbi of the United Kingdom Rabbi Ephraim Mirvis has launched an unprecedented attack on the leader of the UK’s Labour Party, saying he is unfit to lead the country.

Warning that “the very soul of our nation is at stake” this marks the first time a chief rabbi has ever openly intervened in a general election.

In an article in the Times which he said was written with “the heaviest of hearts”, the Chief Rabbi attacks as “mendacious fiction” Mr Corbyn’s claim in last week’s televised general election debate that Labour has “investigated every single case” of anti-Jewish racism.

Also highlighting shadow chancellor John McDonnell’s claim that the party is now “doing everything” to tackle the crisis, the Chief Rabbi says: “The claims by leadership figures in the Labour Party that it is ‘doing everything’ it reasonably can to tackle the scourge of anti-Jewish racism and that it has ‘investigated every single case’ are a mendacious fiction.”

Without referring to Mr Corbyn by name, Rabbi Mirvis asks: “How complicit in prejudice would a leader of Her Majesty’s opposition have to be in order to be considered unfit for high office?”

He then adds: “Would associations with those who have openly incited hatred against Jews be enough?

“Would support for a racist mural, depicting powerful hook-nosed Jews supposedly getting rich at the expense of the weak and downtrodden be enough?

“Would describing as “friends” those who endorse and even perpetrate the murder of Jews be enough? It seems not.”

In a clear reference to Jewish MPs such as Dame Louise Ellman, Luciana Berger and also to the whistleblowers who spoke out about Labour’s failure to tackle the problem in a BBC Panorama documentary, he writes: “We sit powerless, watching with incredulity as supporters of the Labour leadership have hounded parliamentarians, party members and even staff out of the party for facing down anti-Jewish racism.

“Even as they received unspeakable threats against themselves and their families, the response of the Labour Leadership was utterly inadequate.”

Admitting that raising concerns about the antisemitism issue ahead of the December 12 election is “amongst the most painful moments” he has experienced since taking office, Rabbi Mirvis insists he decided to speak out on behalf of the Jewish community.

He says: “The Jewish community has endured the deep discomfort of being at the centre of national political attention for nearly four years.

“We have been treated by many as an irritant, as opposed to a minority community with genuine concerns.”

In a sustained attack on Mr Corbyn’s party, he writes: “The party leadership have never understood that their failure is not just one of procedure, which can be remedied with additional staff or new processes.

“It is a failure of leadership. A new poison – sanctioned from the very top – has taken root in the Labour Party.”

The Chief Rabbi ends by saying: “It is not my place to tell any person how they should vote.”

He then writes: “I regret being in this situation at all. I simply pose the following question: What will the result of this election say about the moral compass of our country?

“When December 12th arrives, I ask every person to vote with their conscience.”