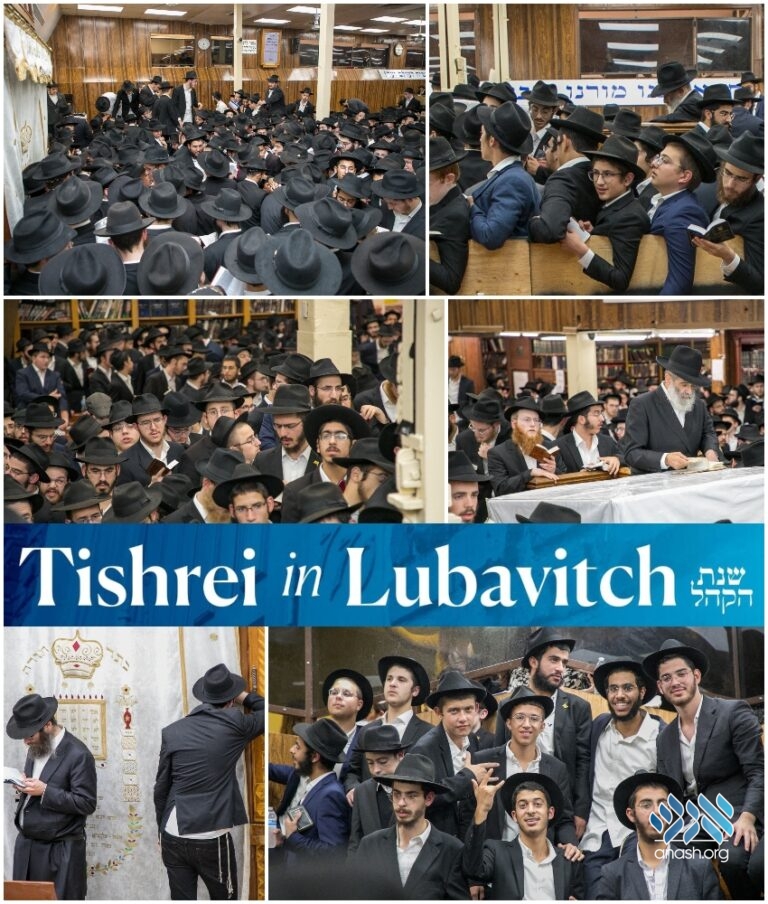 Thousands of Crown Heights residents and guests from around the world packed into 770 Eastern Parkway for the two days of Rosh Hashanah, for 48 hours of uplifting davening, mivtzoim, Tehillim and farbrenging, drawing chayus for the new year of 5783.

Thousands of Crown Heights residents and guests from around the world packed into 770 Eastern Parkway for the two days of Rosh Hashanah, for 48 hours of uplifting davening, mivtzoim, Tehillim and farbrenging, drawing chayus for the new year of 5783.

From an hour before lichtbenchin, the main shul of 770 started filling up with hundreds of people who came to recite Tehillim before davening, and claim a good ‘spot’. By the time maariv came around the Shul was packed to capacity as many more guests came to be by the Rebbe for hakhel. Rabbi Ahron Loschak served as the chazzan for maariv.

The first minyan of the early minyanim began at 7:00 AM for a group that was walking to NYU Hospital to sound the shofar for hospital patients. They were joined by many others who were also walking a long distance for mivtzoim.

By the time the main minyan began at 10:00 AM, the Shul was already full to capacity. For the thousands of guests who traveled to the Rebbe for Rosh Hashana and hakhel, securing a good-standing space proved challenging.

Leading the tefillos were Rabbi Menachem Amar until hamelech, Rabbi Zalman Goldstein as chazzan for shacharis, and Rabbi Eliyahu Eidelman as chazzan for musaf. Following krias haTorah, the thousands of locals and guests began preparing for tekias shofar, with Rabbi Sholom Tenenbaum serving as baal tokea, and Rabbi Yosef Braun serving as makri.

During Krias Hatora, Hatomim Shneur Zalman Feldman, son of Oholei Torah mashpia Rabbi Kuti Feldman was called up to the Torah for his Bar Mitzva. Rabbi Mendel Altein received an aliya in honor of his son’s bris. A number of newborn babies were also named by the Torah.

During the seder niggunim held in preparation for tekios, the singing paused for a moment as mohel Rabbi Yisroel Heller performed a bris on the son of R’ Yehuda Pevzner. Following the milah, the mohel placed a bit of blood on the lips of the ba’al tokea, as brought in seforim. Brachos and kriyas hashem were done outside in the lobby, and the baby was named Yosef Yitzchak. Mazal Tov!

For the first time since Rabbi Sholom Tenenbaum began serving as baal tokea, the tekios blew smoothly and without a hitch. Some in the crowd attributed the easy tekios to the spiritual effect of the blood placed on the ba’al tokea’s lips.

A large crowd also joined Tefillos held in the Tishrei tent on the street outside 770. The 250-foot-long fully air-conditioned tent provided a comfortable place to daven for the crowd who was unable to get into the packed shul.

Following mincha, thousands passed through the courtyard of 770 to recite tashlich near the designated spring, with women reciting tashlich near a pool set up on the balcony. Both locations had many fish. To allow the crowd to move through smoothly, gabboim arranged a path for entering and a separate path for exiting.

The second day of Rosh Hashana, began much like the first, with early minyonim for mivtzoim-goers, and hundreds of bochurim heading out to blow shofar around NYC. As davening commenced, Rabbi Mendel Blau served as the chazzan for shachris, and Rabbi Menachem Mendel Korn was the chazzan for musaf. Rabbi Tenenbaum blew the shofar on the second day as well, alternating between the Rebbe’s shofar and his personal shofar. Rabbi Nochum Koplinsky served at chazzan for mincha on both days.

On both days of Rosh Hashana, beginning at 10:00 AM, Shofar was blown every hour on the hour, for anyone unable to attend shul, at the corner of Kingston and Eastern Parkway near the big dreidel. The hourly shofar was arranged by Rabbi Yosef Yitzchak Kratz, manager of 770.

Immediately after davening on both days, hundreds of bochurim were dispatched to hospitals, senior centers, nursing homes, busy intersections, and apartment buildings to blow shofar for local yidden. Packets were prepared before yomtov with detailed instructions and printed maps with directions to each destination, all arranged by Rabbi Menachem Gerlitzky in conjunction with Tzach.

Rosh Hashanah concluded with a farbrengen, with a large crowd packing into 770 to sing the niggunim of the Baal Shem Tov, Maggid, and the seven Chabad Rebbeim, thus bridging the gap between the Yom Tov and the coming days, bringing the inspiration of Rosh Hashanah to all the days of the coming year.

All pictures were taken before and after Yom Tov.