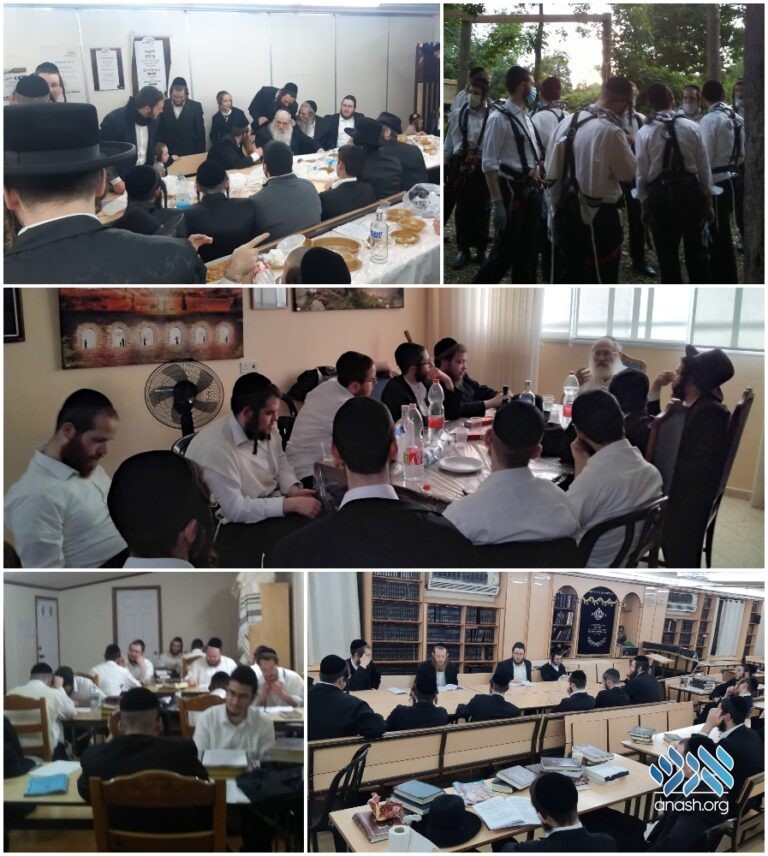 Established two years ago, Maayan Menachem brings Chassidus to American bochurim and yungeleit spending the year in Eretz Yisroel, with a variety of shiurim, farbrengens and even a summer camp.

A new organization for spreading Chassidus helps brings the wellsprings of the Ba’al Shem Tov and the Rebbeim to Americans bochurim and yungeleit spending the year in Eretz Yisroel, with a variety of shiurim, farbrengens and even a summer camp.

Maayan Menachem was founded on Gimmel Tammuz 5780, inspired by the Rebbe’s call to spread the wellsprings of Chassidus without distinction between background and community.

During that summer, Maayan Menachem‘s first project took place under the guidance of veteran Shliach Rabbi Nosson Gurari. Campgrounds were made available in Ellenville, NY, and over 20 Bachurim from Lakewood Monsey, Boro Park and Williamsburg joined. It was a first-of-its-kind Camp for Bachurim from mainstream Yeshivos to spend a few weeks seriously learning Chassidus.

Amongst the mashpi’im and maggidei shiur who joined the program were Rabbi Nosson Gurari, Rabbi Gedalya Oberlander, Rabbi Mendel Levin, and many others. The bachurim and the mashpi’im were equally amazed at the success of the program. The summer program culminated with a farbrengen at the Rebbe’s Ohel, and it was clear that Maayan Menachem was here to stay.

Sure enough, as it became clear in the coming weeks that the Israeli border was still closed to foreign students due to Covid-19, the need arose for an Elul Yeshiva. Maayan Menachem rose to the occasion and within days, a beis medrash, dorm, and staff were found for the coming month. For the first time ever, Lakewood was hosting a Yeshiva with daily sidrei Chassidus, mashpi’im, and farbrengens. Shiurim on Iggeres Hatshuva and hemshech Rosh Hashana Tof Reish Samach were given by Rabbi Nosson Gurari and Rabbi Chaim Meisels. For Shabbos Slichos the Yeshiva was joined by Rabbi Levi Klein and Rabbi Psachya Korf, who remained for an unforgettable chassidishe selichos.

Over the next month, additional Tishrei farbrengens with Shliach Rabbi Moishe Gurari and Mashpia Rabbi Mendel Levin kept up the momentum.

Over the following year, Maayan Menachem landed in the Holy Land with a weekly night kollel program for the bachurim learning in Yerushalayim. The bochurim would come once a week to learn maamarim, alongside farbrengens and shiurim by various mashpiim. With the assistance of Rabbi Moshe Shilat, 40 bochurim were able to come together for an uplifting Shabbos Hisvaadus in Kfar Chabad. Rabbi Zalman Gopin spent the Shabbos Farbrenging with the bochurim, and was very impressed with the eagerness of these bochurim, and their determination to learn and experience Chassidus.

The summer came along once again, with the obvious need for a summer framework. Once again a venue was provided for, and Maayan Menachem was back for its second and largest summer yet. Over 40 bochurim participated in the camp program, starting out in Mitzpe Ramon and finishing in Kfar Chabad. Among the participating maspi’im were Rabbi Mendel Vechter, Rabbi Zalman Garelik, Rabbi Zalman Gopin, and others.

The momentum reached during the summer continued well into the winter, with the kollel eventually reaching an unprecedented 50 bochurim weekly, with steady shiurim, farbrengens, and Shabbosim. Actively run by Rabbi Betzalel Kleinman, and under the guidance of Rabbi Zalman Gopin and Rabbi Chaim Sholom Deitch, Maayan Menachem grew by leaps and bounds.

Today, Maayan Menachem is the chassidishe family for any American living in Yerushalayim. Boasting farbrengens and shiurim for yungerleit, their wives, and of course the good old boachurim! Multiple learning programs, Shabbosim, and farbrengens make Maayan Menachem the go-to for anyone interested in learning and living Chassidus.

Hundreds of American families and bochurim in Yerushalayim are waiting for Maayan Menachem to reach them. It’s up to you!