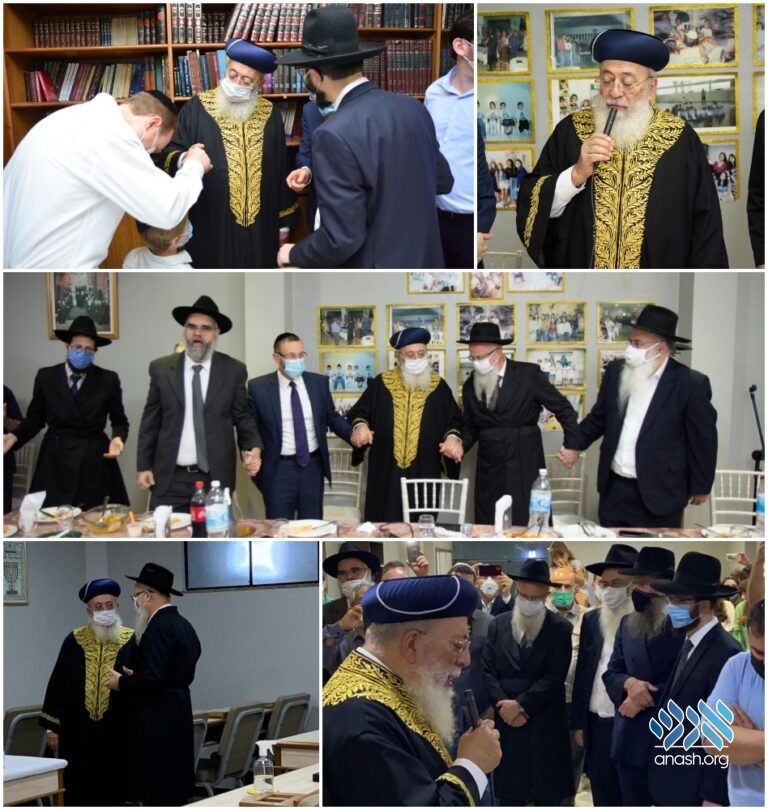 The Jewish community of Belém, Brazil, led by Shliach Rabbi Disraeli Zagury, were graced with a visit by Rishon Letzion Rabbi Shlomo Amar, who addressed the community and encouraged them to strengthen their Torah observance.

The Jewish community of Belém, Brazil, led by Shliach Rabbi Disraeli Zagury, were graced with a visit by Rishon Letzion Rabbi Shlomo Amar, who addressed the community and encouraged them to strengthen their Torah observance.

Rabbi Amar was visiting Brazil for a personal matter, when the opportunity arose for him to visit Belém. With the community mainly consisting of Moroccan Jews, it was the closing of a circle for the Chief Rabbi, who was born in Morocco himself.

The community of Belém traces itself back to 1840, when the first Moroccan expats moved there. They settled around the Amazon River and founded a community with shuls and charitable institutions. The family names of the Jews in Belém are like any other Moroccan community: Benzekri, Benmouyal, BenShimon, Attias, Serouya. For 180 years, the flame of Yiddishkeit was kept alive, but there are also those who have assimilated.

Three decades ago, Shliach Rabbi Disraeli Zaguri moved to Belém, and began leading the community and directed all matters of yiddishkeit. Community members say that Rabbi Zaguri is a true hero and pillar of Moroccan Jewry in northern Brazil. He is the chazan, rabbi, teacher, mohel, shochet and leads the chevra kadisha. “He has succeeded in a way beyond nature,” they say.

In Belém, 70 percent of the Jewish population buy kosher meat, greatly surpassing the percentage of kosher consumers in Sao Paulo and Rio, which are a four hour flight away. The yeshivos in these two large cities have also admitted relatively more students from Belém than any other city in Brazil.

“All this is thanks to Rabbi Zaguri, his wife, their son Rabbi Shlomo and their son-in-law Rabbi Aryeh Richman who lives in the city of Manaus,” locals say.

While visiting the community, Rabbi Amar took the opportunity to address locals, and encourage them to increase in their Torah observance. With his pleasant words and his princely and rabbinical appearance, he inspired the Jews in northern Brazil. He also visited Rabbi Zaguri’s educational institutions and took the time to bless the members of the community.

The highlight of the visit was when he attended the wedding of a local couple who is close to Chabad, Bruno Benelisha, and his wife Laura, who is from Belo Horizonte. The Chief Rabbi blessed the couple and delighted the entire city with his noble presence.

“In the entire 180 years since the founding of the Belém Jewish community, it has never received such an important and dignified visit,” community members said.