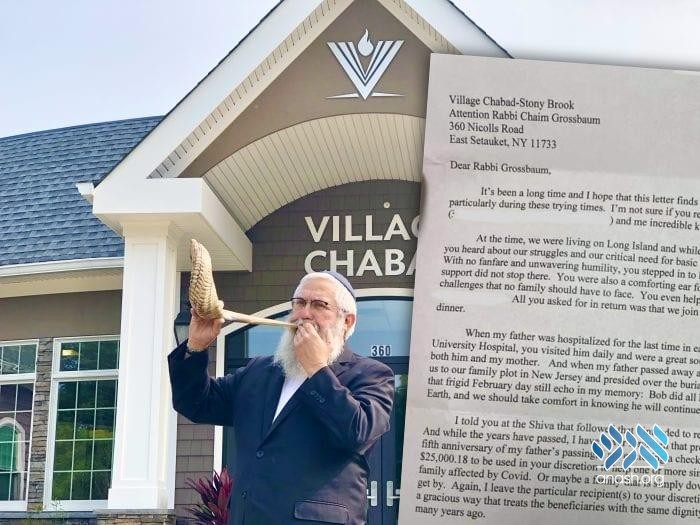 When Rabbi Chaim Grossbaum of Village Chabad-Stony Brook helped a young boy and girl whose parents were down on their luck and facing eviction, he never imagined that 25 years later, he would find a check in his mailbox for $25,000.

When Rabbi Chaim Grossbaum of Village Chabad-Stony Brook helped a young boy and girl whose parents were down on their luck and facing eviction, he never imagined that 25 years later, it would amount to an anonymous donation in his mailbox in the form of a check for $25,000.18.

Yet that’s exactly what happened.

On a relatively random December morning, Grossbaum was shocked to discover the significant sum, along with a letter reminding him of his kind deed so many years before and asking him to distribute the funds as he saw fit.

In the letter, the author described how he wasn’t even part of the congregation, yet when Grossbaum heard about their “critical need for basic essentials like food and utilities,” he stepped in to help with “no fanfare and unwavering humility.”

“I remember him clearly,” the rabbi told Chabad.org. “It really hurt the heart to see such young kids being evicted from their homes with nowhere to go. When they called Chabad House for help, we quickly mobilized and secured two months’ rent and a security deposit for them for a new place.”

The anonymous author relates how in 1996, their father was hospitalized locally, and Grossbuam visited him every day, providing a “much-needed comfort to both him and my mother.” And when their father passed away, once again, the rabbi was there to shepherd them through it. “The words you uttered that frigid February day still echo in my memory,” he writes.

The author concludes that while he was unable to pay it forward then, he had every intention of doing so. While many years may have passed, he never forgot this promise. And so, 25 years later, he has finally been able to make good on that promise.

“When I opened the envelope, needless to say, I was truly shocked,” the rabbi said. “What struck me most was that I did what any other Chabad rabbi would have done. This is what we’re all about—not big events or numbers, but every individual, to simply help in whatever ways we can, both materially and spiritually.”

As it turns out, the donation couldn’t have come at a better time. The anonymous donor stated that he is leaving the exact beneficiary of the money to the rabbi’s discretion “to help one or more families in need.” And that’s exactly what’s going on at Chabad of Stony Brook, as they are in the middle of a large building campaign for a new facility that will include a commercial kitchen in order to provide essential services to the community.

“Among other things, it will be a soup kitchen,” said Grossbaum. “We also hope to increase the availability of kosher food, providing takeout for Shabbat, as well as providing a place for the senior community to gather together, G‑d willing, after the pandemic has receded, over a hot lunch to enjoy some social life.”

Other parts of the building campaign have been funded, except for the kitchen. The $25,000 will go a long way, but, of course, much more is still needed. “If anyone else wants to anonymously pitch in, we’ll be glad to take it,” he quipped.

As the donor concludes in his letter, “Please also know that I wish to remain anonymous with the beneficiaries. Just ‘paying it forward’ to help struggling families is more than enough.”