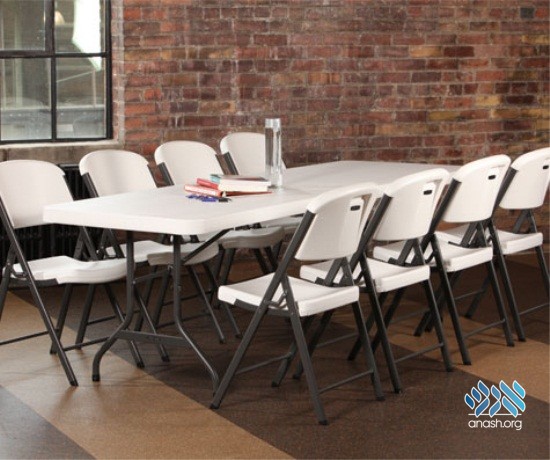 May I borrow tables and chairs from a shul for a simcha I am hosting at home?

A shul is a mikdash me’at and the kedusha of Hashem resides in it. It is therefore important to maintain its cleanliness, including sweeping and mopping, and interestingly enough, the zechus of Yehoshua bin Nun was that he set up the benches by Moshe Rabbeinu. Furniture items of a shul, including the tables and chairs, have kedusha which precludes their use for mundane purposes (and for example, mundane items shouldn’t be placed on a bima).

The permissibility of holding a farbengen or siyum in a shul is justified on the basis that they bring honor to Hashem, are considered seudos mitzva, provide food for poor people, and it is all for the purpose of serving Hashem. For this reason, we aren’t concerned that people will act disrespectfully even after drinking some wine.

Additionally, when a shul is built, a condition is generally made stating that certain behaviors which are usually prohibited in a halachic shul(beis haknesses) should be permitted, and this suffices to permit these things to be done. In some cases, even if a condition was not made explicitly, since such behaviors are common in a shul, we consider the condition as having been made implicitly.

Yet, this only applies if using these tables or chairs will not cause a distraction to those who frequent the shul for davening and learning. Otherwise, poskim write that it falls into the category of “destroying a house of Hashem.”

Needless to say, one may only borrow them with permission of the gabbai. Even one who pays membership towards the upkeep of the shul cannot borrow without permission of the gabbaim, because although the entire community are like ‘partners’ with regards to communal property, an individual desiring to make use of public property nonetheless requires authorization from those entrusted with safeguarding the property on behalf of the community.