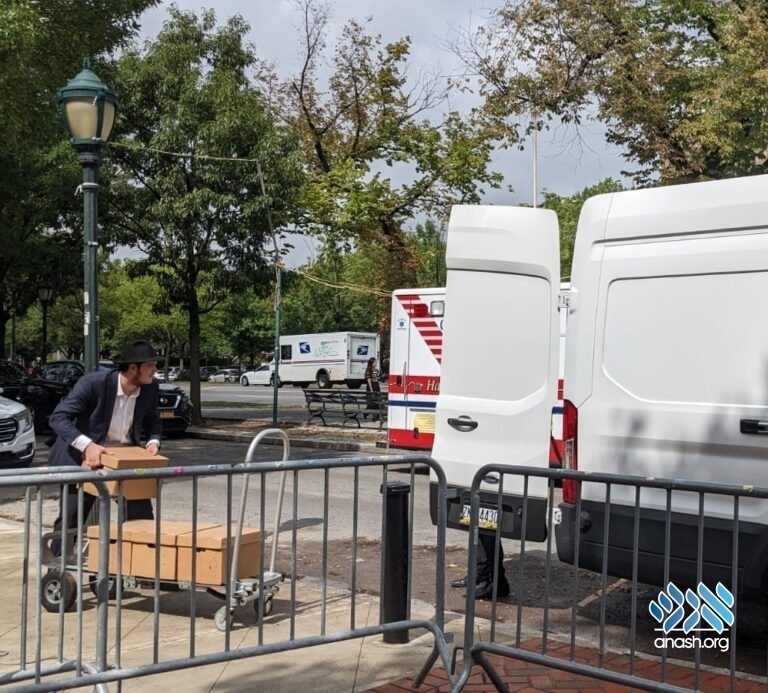 Books from the Rebbe’s library were seen being carted away on Tuesday morning to be restored after they were damaged in a late-night flash flood that also filled the main zal of 770 with water.

Books from the Rebbe’s library were seen being carted away on Tuesday morning to be restored after they were damaged in a late-night flash flood that also filled the main zal of 770 with water.

A flash flood warning had been in effect for parts of Brooklyn, Queens, and Staten Island through 7:30 a.m. and officials warned people not to drive through flooded roadways and to get to higher ground if necessary. The weather was so extreme in the tri-state area that at one point authorities even warned a tornado could touch down, though the risk of that had passed by 5 a.m.

The storm caused extensive flooding across New York, with many roads shut down due to flooding, some subways closed, and some in Queens even having their homes submerged.

In Crown Heights, the heavy rain and flash flood caused a fair share of damage as well. Homes were flooded, and damage was caused to properly, especially basements across the neighborhood. Rabbi Moshe Feiglin of Aliya shared an image of the Aliya center’s recently built mikvah, which had been slowly filling up with rainwater, now filled to the top with sewage, as the sewers had backed up. Now, the wait for rain would have to start all again.

In 770, the main shul, which is situated below street level, had the entrances quickly filled with water, overwhelming the gutters and quickly flowing inside the shul. Bochurim who were awake at the time quickly removed seforim from the bottom shelves to ensure their safety.

The building just next door, which houses the Central Chabad Library, wasn’t so lucky, however. The rain entered the lower level of the building, also located below street level, and the water reached the lower shelves, soaking an unknown number of books.

On Tuesday morning, as the rain abated, the books were quickly packed up in boxes, and were later seen being picked up by a van marked with the logo of the Polygon Group a company that specializes in mitigating and controlling the effects of fire and water.

On their website, the Polygon Group describes the methods they use to use to restore books and documents that had been water damaged.

“The vacuum freeze-drying process is the most efficient and effective method for the drying of wet papers and other documents. Using this method, Polygon technicians can restore water-damaged materials quickly and effectively, reducing back processing time by 20 to 30 percent. During this process, the materials are placed in an airtight chamber into which negative vacuum pressure is induced. As a result, the documents go from the frozen state to being dry without ever becoming re-liquefied. This method is especially beneficial in cases where documents may warp or distort,” they write.