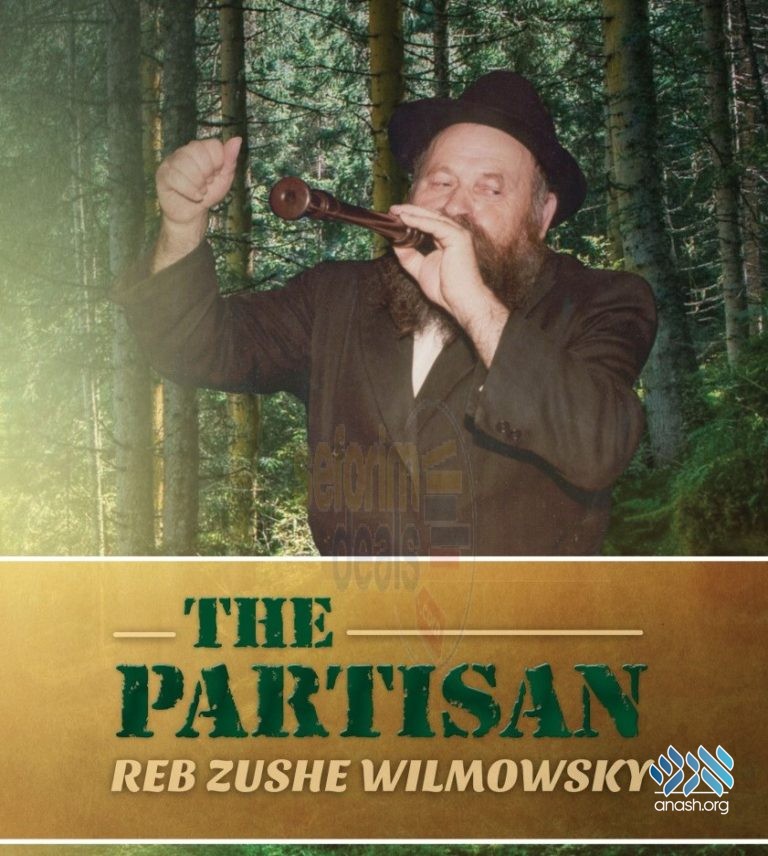 Deep in the Polish forest, the only sound that could be heard is a rustle in the bushes. A brute Russian, dressed in ragged clothing, creeps his way through the shrubbery, on his way to blow up a bridge, sabotaging a Nazi train full of ammunition for the front lines. Any moment he can be shot by a German, sniffed out by a hunting dog, or spotted by a villager paid to look out for him.

This image is one that most people will visualize when hearing the word ‘partisan’. The picture on the cover of “The Partisan” (BSD Publishers, 2019) however, is of a different character. It shows a Chassid wearing a kapote, holding not a gun, but a flute, and encouraging the singing at a celebration, perhaps at a farbrengen or at Simchas Beis Hashoeva.

It was not for naught that Reb Zushe Wilmowsky was known by that name. Born in 5682 (1922), he was in his teens when the Second World War broke out. Like most Jews at the time, Zushe was forced to travel from place to place, searching for a safe haven. But when he arrived in Lida, a city in Belarus, he was forced into a ghetto and from there to a nearby labor camp. Realizing that life in the labor camp was unbearable, Zushe escaped with his friend to the nearby forest to join the famed Bielski partisan group.

After surviving the war, and being introduced to Chabad Chassidus in a DP camp, Reb Zushe went on to become one of the foremost communal activists in Eretz Yisroel. Some of his many activities included establishing Tomchei Tmimim in Lud, founding the Chabad network of schools – Reshet Oholei Yosef Yitzchok, worked to establish N’shei Chabad in Israel and tirelessly toiling at every opportunity to assist the fledging town of K’far Chabad.

Reb Zushe was also famously known for arranging shiurim for the visitors who traveled to the Rebbe for the month of Tishrei, and mostly for being the “Rebbe’s inspector” – traversing the length and breadth of Eretz Yisroel to check on all the various Chabad institutions and report back to the Rebbe.

Today Chabad in Eretz Yisroel consists of numerous Yeshivos, over 300 Chabad houses, numerous Shuls, schools and institutions, neighborhoods in Kiryat Malachi, Tzfas , Yerushalayim and other cities, and of course the town of K’far Chabad. It is hard to imagine that there was a time when Chabad in Eretz Yisroel had to struggle for every shekel, go door to door to find enough students to open a school, and live and teach in dilapidated abandoned Arab homes. Nothing was guaranteed. Every step forward was only accomplished with much exertion and hard work.

For his uncommon way in dealing with the constant obstacles in the way of any action, the Rebbe referred to Reb Zushe as “mein partisan” – my partisan. The Rebbe even explained during a farbrengen the unique way a partisan works, and how it applied to Reb Zushe. The book gives us a glimpse into this extraordinary life.

The Partisan was originally written in Hebrew and only recently translated and published in English. Some of the chapters have been shortened or omitted; as a result, the English edition is shorter than the Hebrew.

In summary, The Partisan gives us a captivating glance into a time not so long ago with very different circumstances. It takes us by the hand through the tumultuous years of the founding of the state of Israel and Chabad’s establishment there. For the full story with all of its glorious details, however, bilingual readers may want to refer to the Hebrew version.