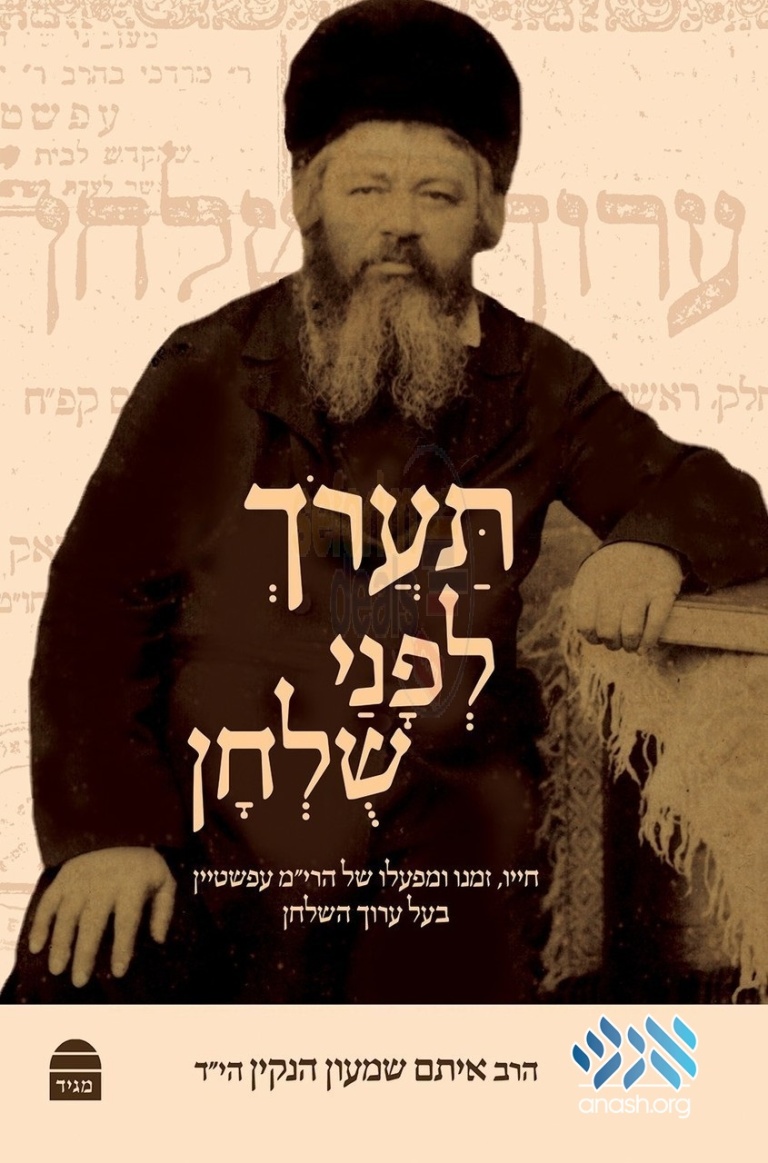 The Aruch Hashulchan is a basic staple for the study of Halacha. A new book takes a look at the man behind the masterpiece. Also: Was his meeting with the Tzemach Tzedek fact or fantasy?

When one walks into a Beis Medrash, Kollel or Yeshiva, one cannot help but notice the tremendous amount of seforim in the halacha section, commentaries on the Shulchan Aruch which were written over hundreds of years by a wide range of authors. What one may not notice is that it is rare to find a commentary covering all four sections of the Shulchan Aruch. Even the more famous works, cover only a portion. For instance, the Mishnah Berura was only written on the orach chaim section. Even the Alter Rebbe’s Shulchan Aruch, the ultimate authority for Chabad chassidim, had many sections destroyed in fires, and currently does not exist on the entire even ha’ezer nor on large parts of yoreh deah or choshen mishpat. One of the very few exceptions is the Aruch Hashulchan.

Besides for its uniqueness in quantity, the Aruch Hashulchan is known as being a staple for in-depth study of halacha. It is known as an invaluable set of seforim for rabbonim, kollel yungerleit, and anyone who delves into the holy words of the Shulchan Aruch. In fact, Reb Zalman Shimon Dvorkin, the rov of Crown Heights, was known to always have an Aruch Hashulchan on his table and many times to pasken directly from it.

Who was the man behind the masterpiece? Ta’aroch Lefonai Shulchan (Maggid Books, 2019) takes us behind the scenes for an intimate view of the life and works of Harav Yechiel Michel Epstein. Written by Rabbi Eitam Henkin Hy”d, and published by his family after his untimely passing, the book has fast become a favorite in Eretz Yisroel and in America.

Originally written as a series of articles published in various scholarly journals, the book has a different style than most biographies found in your local Jewish bookstore. In the average biography, one would expect to find a continuous flow, detailing the life of the subject from birth until passing. In Ta’aroch Lefonai Shulchan, besides for the biographical information, each chapter is a stand-alone study of a different aspect in the world-view of Harav Yechiel Michel Epstein or the works he authored. Some examples include: His relationship with the Zionist movement, his involvement with the Mussar movement, and an in-depth study of the timeline of the publishing of his magnum opus – the Aruch Hashulchan.

For those who enjoy reading about Chabad history, this book comes with a special bonus. In “Mekor Baruch” written by Harav Boruch Epstein, the author of Torah Temima, and son of Harav Yechiel Michel Epstein, a fanciful story is recorded, describing in detail a meeting between the author’s father and the Tzemach Tzedek. The description included complete conversations, some including statements one might expect from an opponent of Chassidus, and not a chassidishe Rebbe. Basing on the above and other questionable claims, R’ Yehoshua Mondshine published an article decrying the story as being falsely transcribed. In Appendix I in our book, the author, although agreeing with his premise, responds to many of his claims, and comes to some different conclusions.

All in all, the book is enjoyable for history buffs and anyone who enjoys a good read. The author was a phenomenal talmid chacham and historian who does not disappoint.  One walks away with a new appreciation for the Aruch Hashulchan, its author, and the legacy he left behind.