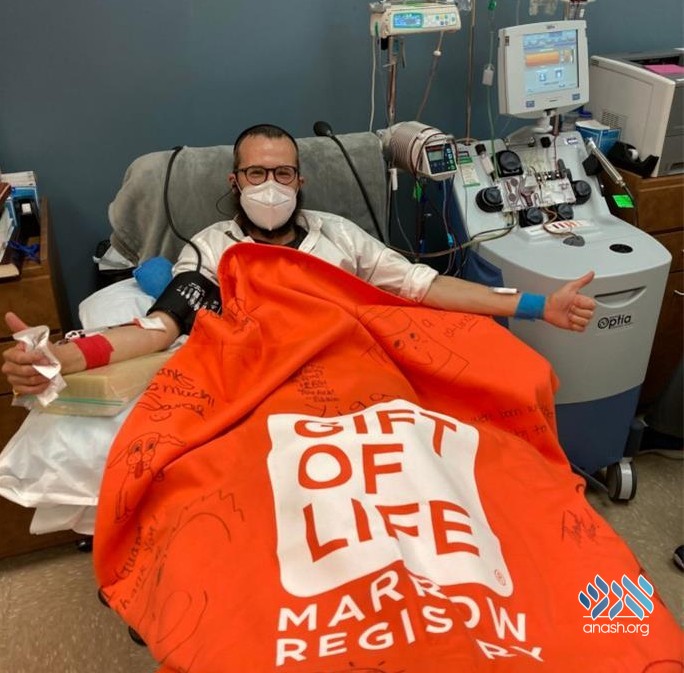 “If someone were to stop me in the street and ask me to give a limb to save a life, I wouldn’t hesitate,” says Rosenberg passionately. “What good is a hand when it comes to an entire life?”

Rabbi Yigal Rosenberg—a well-loved community rabbi in California and co-director of Chabad of Santa Clara with his wife, Elana—isn’t new to saving lives. From domestic violence to drug addiction, the rabbi doesn’t shy away from involvement in lifesaving activities, but instead finds himself propelled towards them. But seldom does one get the opportunity to directly save a life in a very physical way.

In mid-February, before the emerging pandemic would dominate the headlines, as well as the lives of him and his community members, Rosenberg hosted a cooking demonstration at a local Lexus dealership featuring local gourmet chef Tanya Solomon, coupled with a bone marrow donor swabbing drive on behalf of the Gift of Life registry—one of two private U.S. stem-cell registries.

Donor turnout was high, with virtually all attendees getting “swabbed,” a brief process in which a long cotton swab collects cells from the inside of the cheek, where they are then shipped off to a lab to determine their human leukocyte antigens, or HLA markers. Once the tissue type is determined, potential donors are added to a worldwide registry, which is made available to transplant centers and physicians.

Since only 30 percent of patients find a match within their immediate family, the majority need to search the registries. As bone marrow matches are very much dependent on the donor and recipient sharing specific genetic markers, the next best shot after family is one’s ethnic group. While Gift of Life services the general community, many of their matches are between Ashkenazic Jews due to the relatively small size of their gene pool.

Days after the swabbing drive, Rosenberg received a call from Gift of Life officials. Assuming that they were calling about his recent donor drive, he was stunned when they told him he was a match. “Your stem cells can save the life of a 40-year-old man with leukemia,” they said. Taken aback, Rosenberg informed them that while he was happy to help, among all the hustle and bustle of the event he hadn’t actually had a chance to join the registry and be swabbed. “They told me I was on the registry from a drive at the Rabbinical College of America in Morristown, N.J., more than 10 years before!” he told Chabad.org.

The rabbi doesn’t see this as mere coincidence. “When we help others, G‑d helps us,” he reflects. “What greater opportunity can one have than to save the life of another? It’s the embodiment of our shlichus—to help our fellow in every way possible.”

“If someone were to stop me in the street and ask me to give a limb to save a life, I wouldn’t hesitate,” says Rosenberg passionately. “What good is a hand when it comes to an entire life? And giving bone marrow was far easier.”

To give the life-giving serum, Rosenberg would have to drive to Los Angeles for several days to LifeStream Blood Bank in San Bernardino, a transplant center nearly eight hours away by car. Gift of Life arranged all the accommodation, but nobody could replace the rabbi at home. “We have three children of our own,” the rabbi explains, “and now, because schools are closed for in-person learning, we’re accommodating local Jewish kids at Chabad for their virtual school.” Fourteen children spend eight hours a day at the Chabad center, keeping up with their general virtual studies in a safe environment. During breaks, they enjoy an array of in-person Jewish educational activities. “We just had a shofar factory and made ‘thank you’ cards for the firefighters” battling California’s wildfires, shares Rosenberg.

Before traveling to Los Angeles, the rabbi had to be conditioned for the transplant. He received several shots of Neupogen daily—even on Shabbat, after consulting a senior rabbi—to stimulate his bone marrow into producing extra stem cells.

At the transplant center in Los Angeles, Rosenberg was hooked up to a machine for eight hours, extracting the stem cells from his blood. “All my blood left my body three times during the procedure,” he says, noting that it was mostly painless.

The precious stem cells were immediately hand-delivered by special courier to the patient in N.J., whose identity is legally withheld from the donor for five years.

Rosenberg, who is also a chaplain with the Santa Clara police department, received well-wishes and support from many in the broader community, including the mayor, deputy mayor and various faith leaders he works with.

Left to hold down the fort in Santa Clara for three days, Elana Rosenberg was very supportive of her husband’s decision. “I felt grateful for the opportunity that my husband had to be able to help someone in a way that no one else could,” she says, noting that “out of 7 billion people in the world, only he was a match for that young man; I’m just praying that the recipient of the donation takes it well and can continue to lead a life of purpose in good health.”