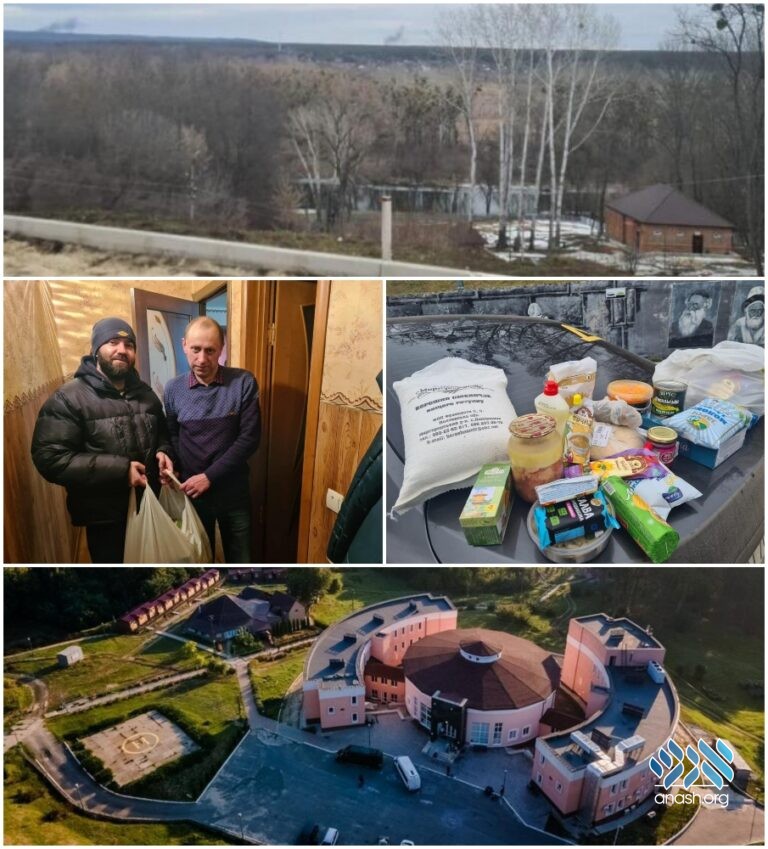 With firefights between Russian and Ukrainian forces taking place just a short distance from the Alter Rebbe’s Ohel in Haditch, shluchim are concerned that the complex could be damaged. Meanwhile, they are helping hundreds of Yidden sheltering there.

With firefights between Russian and Ukrainian forces taking place just a short distance from the Alter Rebbe’s Ohel in Haditch, shluchim are concerned that the complex could be damaged. Meanwhile, they are helping hundreds of Yidden sheltering there.

Approximately are besieged in the town of Haditch in Ukraine, taking shelter in the complex near the Alter Rebbe’s Ohel. The town is halfway between Kharkiv and Kiev, an area where fierce fighting has been taking place in recent days between Russian and Ukrainian forces.

As of Monday morning, the town is in the midst of a fierce battle between Ukrainian forces and the Russian army. Dozens of tanks passed in the area near the Ohel.

With bombs falling just a short distance away, Rabbi Shneur Zalman Deitch, shliach to Haditch, and director of the Kiryat Rabbeinu Hagadol complex, is worried that the Ohel or the nearby building could chas v’shalom be damaged.

“The local Jews did not have time to leave before fighting broke out. I left them with locals, with weapons to guard. The danger on the roads is greater than staying in a relatively safe place, so they do not evacuate. I am very afraid that something terrible will happen here later,” he told YNet.

Deitch himself was in Eretz Yisroel with his family for a simcha when the war broke out. Despite being safe himself, he hasn’t slept in nearly two days, constantly in touch with the people on the ground in Haditch.

Meanwhile, the operators of the compound are also taking care of the hundreds of Jews living in the small villages in the area, and travel to them to provide them with food.

Shlomo, a young Israeli in the compound, says that “the atmosphere is very tense. One moment we are safe and hopeful and another moment we are afraid, we hear alarms that sometimes last half an hour in a row and explosions one after the other, especially at night when the whole town is completely dark. “

He said, “We have local security guards carrying weapons, for the worse case scenario. However, we take comfort in the fact that we have been privileged to be in the presence of Alter Rebbe, especially in such trying times.”