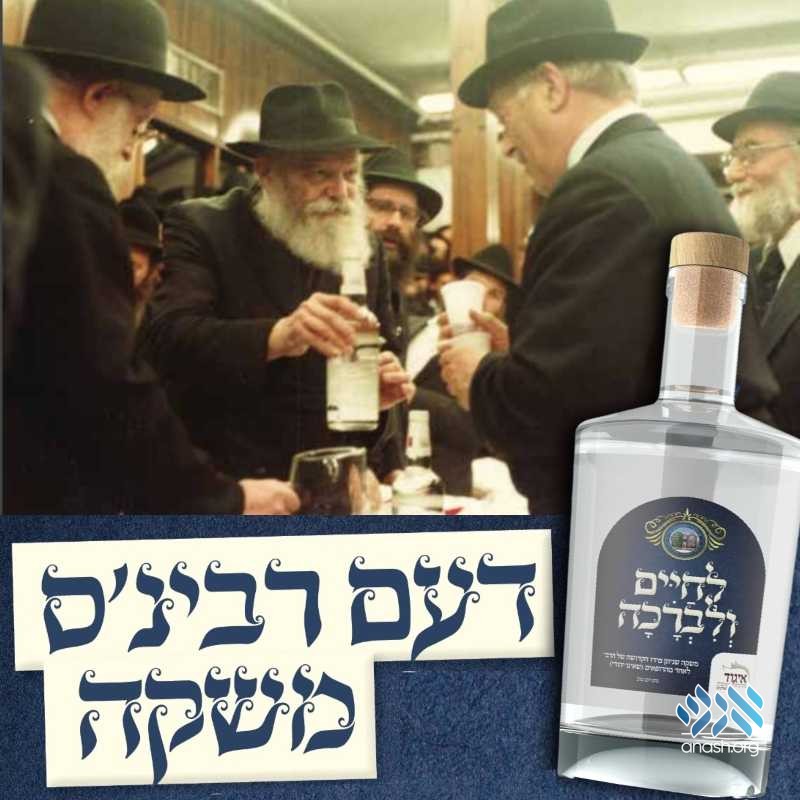 Families of bochurim who will be home for Simchas Torah will receive a special gift containing the Rebbe’s mashkeh, to help serve as a connection between their current physical location and the Rebbe’s.

For over forty years Chasidim merited to receive mashkeh from the Rebbe on different occasions. Mostly at the end of a Shabbos farbrengen, when it would be dispensed to individuals in honor of a special event or pe’ulah they committed to arrange.

The mashke was given as the Rebbe’s participation in the upcoming event/farbrengen (which was then considered a continuation of the farbrengen in 770) where the attendees would partake of the lechaim, warming their hearts with the feelings of closeness to the Rebbe. But throughout, the supply was finished each year before Pesach and Chasidim would eagerly await the next opportunity to acquire more of the precious liquid.

Today, after Gimmel Tamuz, among so many other things we are so sorely missing, the ability to receive mashke from the Rebbe is another one.

But in 5753, the Rebbe gave mashkеh to Tony, a non-Jewish doctor who merited to bring a smile to Rebbe’s holy face on more than one occasion. Due to this, it is now within our ability, over 26 years after Gimmel Tamuz, to obtain mashkeh from the Rebbe!

This year due to the virus ravaging the entire globe, it became impossible for many Bochurim and Anash to make their annual pilgrimage to Chatzros Kodsheinu in honor of Tishrei in general and Simchas Torah in particular.

For this reason, Vaad Hatmimim and Igud Hayeshivos will be sending to the families of all Bochurim who will be home for Simchas Torah some of the Rebbe’s mashkeh in time for the climax of Z’man Simchaseinu, to serve as a “connection” between their current physical location and the Rebbe’s.

In a city with a number of Bochurim, it will be sent to one location and will be available for pick up from there. Exact information will be provided by hanhala of each Yeshiva.

Gedolah legimah shemikareves, as the Rebbe explains, this mashkeh unites us wherever we may be. May we merit that saying lechaim on this mashkeh (with the proper restrictions of course,) will unite all yidden together, and in the zechus of the achdus yisroel it brings we should be reunited with the Rebbe and dance Hakafos in the third Beis Hamikdosh lematah mei’asara tefachim!