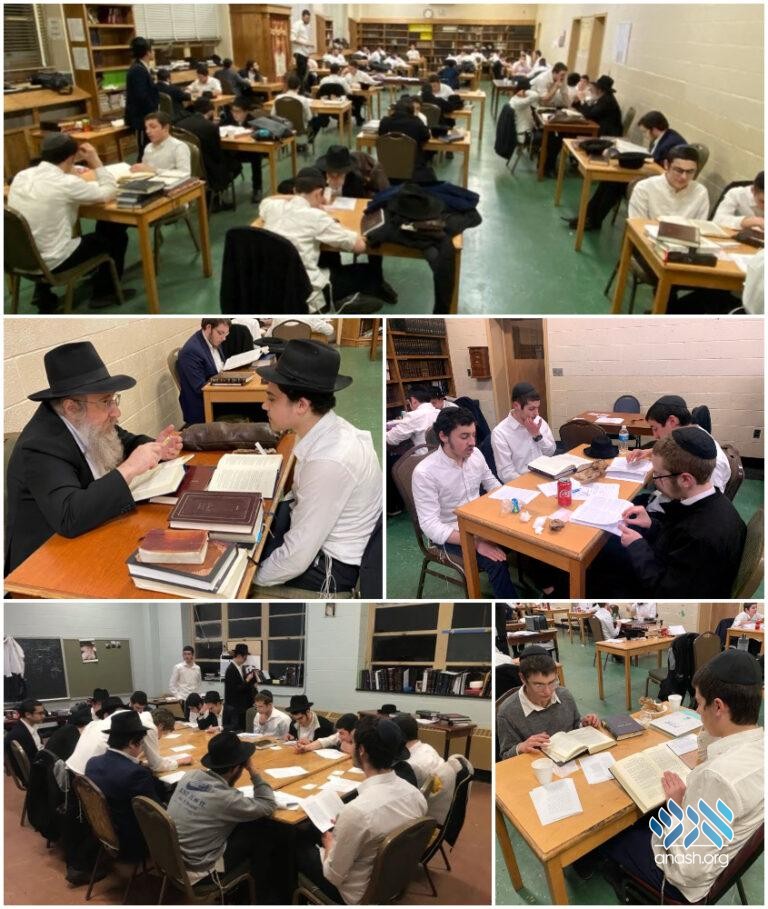 Thousands of pages of the Rebbe’s sichos are being studied by the bochurim of New Haven Mesivta as they prepare to give a gift to the Rebbe for Yud Alef Nissan. On 27 Adar, a special Seder Sichos had bochurim studying for many long hours.

A special gift for the Rebbe is being prepared by the bochurim of New Haven Mesivta in honor of Yud Alef Nissan.

Every night after Seder, and during breaks, one can find bochurim spending their time learning another se’if in Likkutei Sichos, Toras Menachem or other seforim, doing their part to join the yeshiva’s Yud Alef Nissan gift.

The ones behind the idea and the project are the shluchim to the New Haven Mesivta, who came up with an unique way to keep the bochurim motivated to keep on studying.

“We set up the matana in a way that it is a competition between the three grades – Shiur Alef, Beis and Gimmel. That way, the bochurim are always doing their best to keep their class ahead,” shliach Mendel Goldman told Anash.org.

Each se’if in the Rebbe’s Torah that the bochurim learn is counted towards their shiur’s total. The shiur with the highest number of se’ifim will be receiving a special reward. In addition, every bochur who learns 120 se’ifim will receive an automatic prize.

“Our goal is for the entire yeshiva to collectively learn 7,700 se’ifim, and we are already holding well over 7,000,” Mendel Goldman said. “The shluchim have also pledged to match the top number reached by the highest shiur.”

A big boost was given to the matana on Wednesday night, 27 Adar, when the bochurim got together for a special Seder Sichos. They received permission from the hanhala to stay up later than usual, to allow them to utilize the day for extra study of the Rebbe’s Torah.

“At the end of the Seder Sichos, which went on for many long hours, we made the calculation that the total learned just that night amounted to thousands of se’ifim!” Mendel said. “We are confident that this will bring the Rebbe much nachas ruach.”