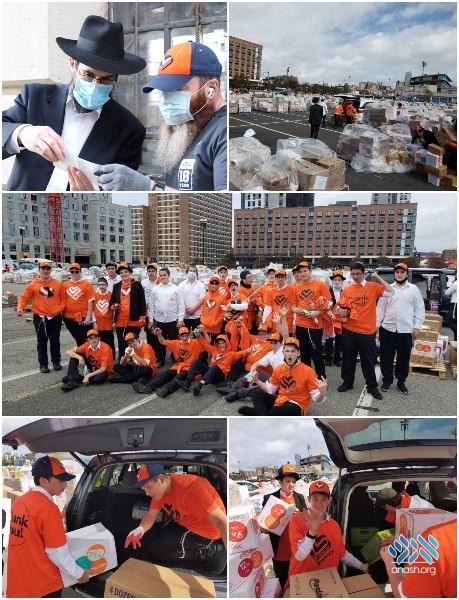 Thousands of teachers were showered with appreciation as they rolled in to the parking lot of the MCU Park in Brooklyn to pick up their Chasdei Lev orders. Amongst the volunteers were 30 bochurim from Mesivta Darchei Menachem.

The new school year has just begun, and we are already benefitting from the fruits of the labor of our dedicated Mechanchim.

Teachers are the backbone of chinuch; that’s why, when we want to impact our children’s chinuch for the better, our first line of defense is to strengthen the mechanchim. Your child’s teacher serves as one of the most influential role models in his or her development, and it is no exaggeration to say that a good teacher can change a student’s life.​

In light of this, Igud Hamelamdim has made it their mission to support, inspire and empower our mechanchim, giving them all the tools they need to optimize their influence. An inspired teacher produces inspired students; similarly a cared for teacher will be able to optimally care for his students.

Thousands of teachers were showered with appreciation as they rolled in to the parking lot of the MCU Park in Brooklyn to pick up their Chasdei Lev orders.

Among them were over 150 teachers from Crown Heights schools who participated, thanks to the efforts of Igud Hamelamdim.

As he pulled into the lot, each teacher was handed a gift and his order was loaded into his car without him lifting a finger. Adults and children from across Brooklyn came out to volunteer and display their admiration for their community leaders.

Amongst the volunteers were 30 bochurim from Mesivta Darchei Menachem. Darchei Menachem program director Rabbi Eli Sandhaus worked on the arrangement and bussed them in to help things run smoothly.

Rabbi Avrohom Bluming, director of Igud Hamelamdim applauded this, saying: “Bringing the children to volunteer is in itself a major chinuch experience.They did a wonderful job, working throughout with chayus and zest! The students got to actively show appreciation to those who give all of themselves to their precious students.”

“It really brought out the best in them and made them feel great,” said principal Rabbi Dovid Marozov, who came out with the bochurim. “Thanks for giving us the opportunity!”

For more information about Igud Hamelamdim’s work for chinuch and to support their work, visit IgudHamelamdim.org/donate.