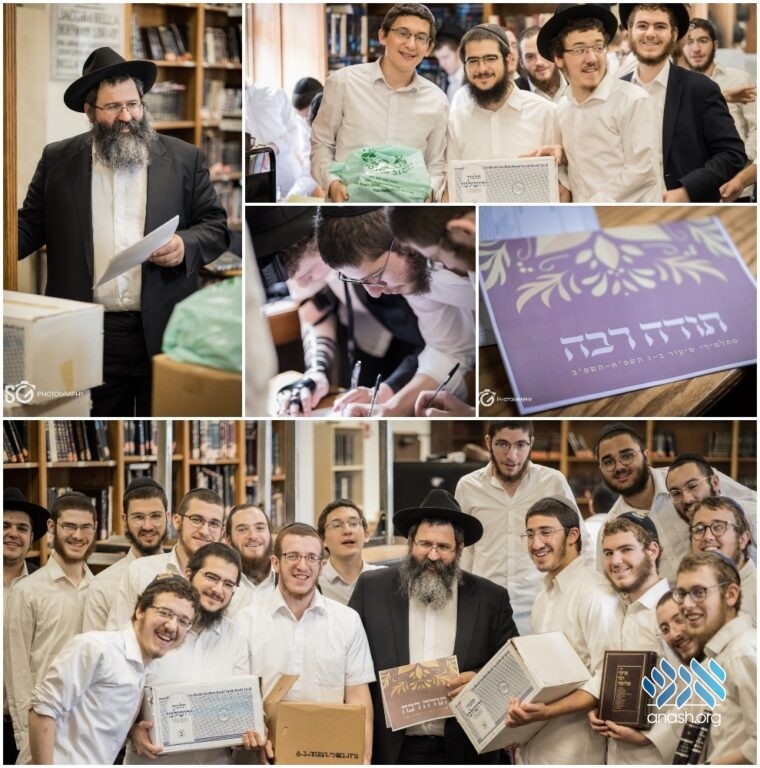 After studying under mashpia and maggid shiur Rabbi Leima Wilhelm in Morristown Yeshiva for two years, a group of bochurim expressed their appreciation with a gift that will help him teach future classes.

Bochurim who had studied in the class of Rabbi Leima Wilhelm in Morristown Yeshiva for the past two years expressed their appreciation for all he did for them with a meaningful gift.

Rabbi Wilhelm serves as a mashpia and teacher of Chassidus for Shiur Beis, as well as a maggid shiur for Nigleh for Shiur Gimmel in the Rabbinical College of America, under the leadership of Rabbi Moshe Herson, dean and Head Shliach of New Jersey.

Over the past two years, a group of over 40 bochurim remained in Morristown for both years, studying both Nigleh and Chassidus under Rabbi Wilhelm. He also farbrenged with the class over both years, inspiring them to grow in their study and avodas Hashem.

As the second year came to a close, the bochurim wanted to present Rabbi Wilhelm with a gift for his countless hours of dedication to their class. They decided to purchase seforim for him, a gift which would be meaningful and would be something that would be put to good use.

Not just content with purchasing a gift card or gifting seforim with a receipt, the bochurim made inquiries which seforim their beloved teacher wanted and still did not own. After consulting with family members, the bochurim decided on a set of Talmud Yerushalmi, a set of Minchas Chinuch with commentary by later acharonim, and a number of Medrashim.

The bochurim also signed a joint letter thanking Rabbi Wilhelm, which they presented to him with the seforim.

On one of the last few days of yeshiva, the bochurim surprised Rabbi Wilhelm with the seforim.

Rabbi Wilhelm was pleasantly shocked by the gift, and received it with great emotion.

“We learned with Reb Leima for 2 years and his dedication to his class, and to the bochurim as individuals, is something not found anywhere else,” one of the bochurim told Anash.org. “The hours he spent farbrenging and learning with bochurim until very late is something we very much all appreciated, and their effect will stay with us for years to come.”