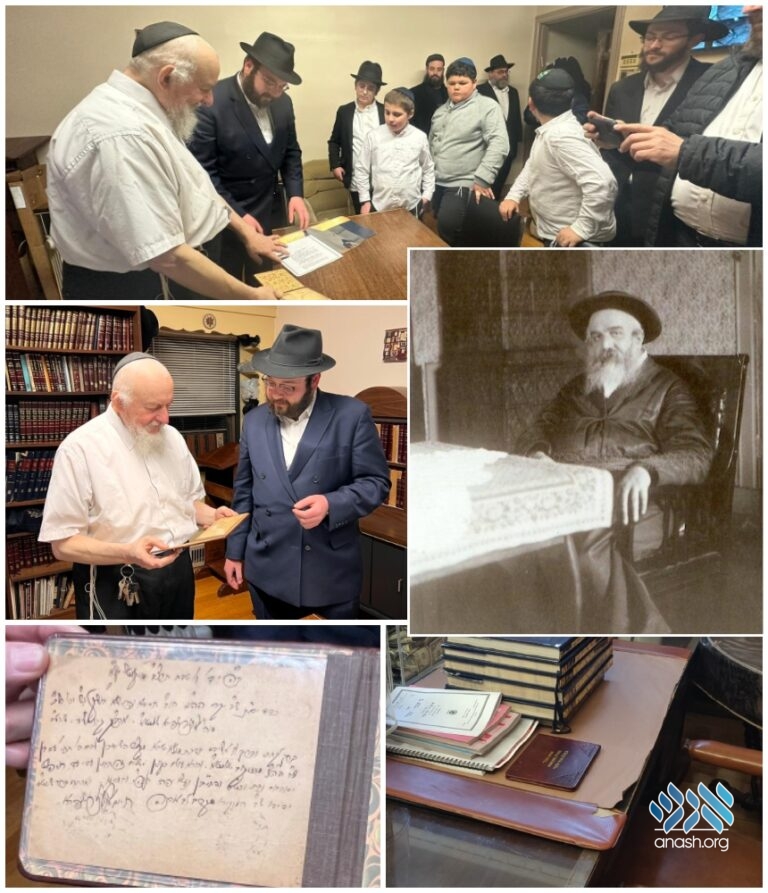 A handwritten postcard written by Rabbi Chaim Elazar Shapira of Munkatch, known as the ‘Minchas Elazar’ was gifted on Thursday to the Rebbe’s library by a Chabad activist in honor of Hei Teves and his birthday.

A handwritten postcard written by Rabbi Chaim Elazar Shapira of Munkatch, known as the ‘Minchas Elazar’ was gifted on Thursday to the Rebbe’s library by a Chabad activist in honor of Hei Teves and his birthday.

The postcard was recently purchased by Rabbi Shmuly Butler. Knowing of the Rebbe’s high regard for the Minchas Elozor, and in line with the Rebbe’s request to help increase the library’s collection, he was determined to bring the letter to the library.

The postcard was on display earlier in the day at the Hei Teves book fair exhibition for the Talmidim of Oholei Torah, An emphasis was placed on Chassidim gifting Seforim and manuscripts to the Rebbe’s Library as per the Rebbe’s horah following Hei Teves.

After purchasing the manuscript, Butler had it encased in an elegant leather album-style frame to present it in a manner that befits its great worth. A select few top students had the opportunity to accompany Rabbi Butler as he presented the postcard to the Rebbe’s Library on this auspicious day.

On Hei Teves, the day the Rebbe declared as a yom segulah for everything connected to the library, and the day he celebrates his own birthday, Butler brought the manuscript to the library. He presented it to Head Librarian Rabbi Berel Levine, who received it enthusiastically, glad to be able to add another rare artifact to the library’s collection.

After taking possession of the remarkable gift, the precious manuscript was placed on the Rebbe’s holy desk, befitting a Torah giant with whom the Rebbe held in the highest esteem.

The Rebbe quoted the Munkatcher Rov many, many times in his writings, and had great admiration for the way he united nigleh and nistar as one in his seforim. One famous example of this is the Munkatcher’s position on clapping while singing on Shabbos. He permitted it, while many poskim say it is allowed only with a shinuy – doing it differently than you would during the week.

A cursory glance at the footnotes in Sefer Haminhagim-Chabad shows this as well. There are many instances where the Rebbe brought the Munkatcher in the footnotes, even when minhag Chabad differs from the Minchas Elozor. The Rebbe once mentioned in yechidus that of every published sefer written by the Munkatcher Rov he would buy two copies – one for the Frierdiker Rebbe and one for himself.

Despite being quite distant geographically, the two courts of Lubavitch and Munkatch had much in common and maintained a strong relationship. The Frierdiker Rebbe would correspond with the Minchas Elozor seeing him as a strong ally in matters of hashkofoh during that time period, a feeling that was reciprocated.

This was the second year that Butler marked his birthday with a gift to the Rebbe’s library. Last year, he purchased and gifted a manuscript from the Rogatchover Gaon to the library.

“A manuscript from the Minchas Elazar is actually harder to obtain than one from the Rogatchover,” Butler told Anash.org. “This is due to the high demand among Hungarian chassidim. Boruch Hashem, I was able to obtain one for the library this year.”