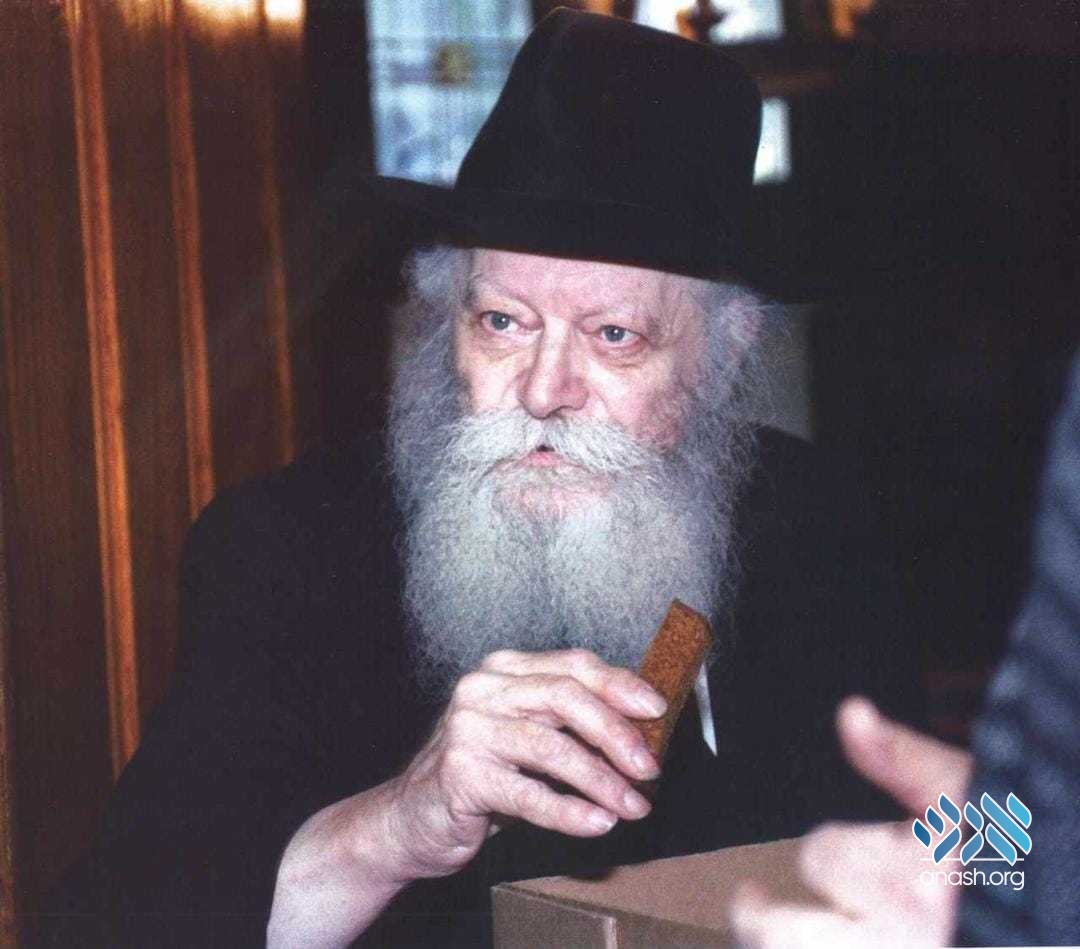 Rabbi Dovid Morris recalls the time when he went on Erev Yom Kippur to receive lekach from the Rebbe for the second time, and the Rebbe’s response.

By the time I came to Lubavitch, in 1978, having yechidus (private audience) with the Rebbe on one’s birthday was, for the most part, already a thing of the past. But from 1979-1981, I enjoyed the unique privilege of having a “yechidus” of sorts, albeit short, with the Rebbe on my birthday every year. You see my birthday is Erev Yom Kippur, and the Rebbe, standing at the doorway of his office (גן עדן העליון), gave each individual “lekach” (honey cake) on Erev Yom Kippur. I treasured that for, in addition to all that lekach is, the added empowerment of a birthday “yechidus”. This was before the Rebbe started giving dollars every Sunday to everyone to distribute to tzedoka (that began 11 Nissan, 5746 – 1986), so being face to face with the Rebbe was then still rare (only a few times a year at kos shel brocha, for example).

But then, in 5742 (1981), a new arrangement was made. The crowds were too big for everyone to get lekach on the one day (and apparently the Rebbetzin voiced her strong concern that for the Rebbe to stand for so many hours giving out lekach right before a day of 26 hours of fasting and avoda was detrimental to the Rebbe’s health). So local people were to receive theirs four days before, while the following three days were designated for visitors according to their region (the rest of the USA, Europe, and Israel, in that order).

I was not happy about losing my special birthday yechidus, but there were very strict warnings by the Rebbe’s secretariat about going only on your designated day (not to mention that, obviously, if it might be connected to the Rebbe’s health, nobody needed to be convinced). So, being a local, I obediently got on line and received lekach four days before Yom Kippur.

On Erev Yom Kippur I was hanging around outside 770 while the Rebbe was giving out lekach, wanting to, at least, absorb the atmosphere of the “chatzar hamelech” (the Rebbe’s court), the Rebbe’s “daled amos” (his close proximity), on my birthday. A friend of mine saw me there and said, “Nu, did you get your annual birthday present?” I replied that, of course, I already received three days earlier because of the new arrangements. He said, “that doesn’t apply to you, it’s your birthday!” Initially I adamantly disagreed, repeating all the warnings etc. But after a back and forth discussion, including his point about how much the Rebbe stressed the importance of a birthday, as well as how the Rebbe himself wants to give (and I shouldn’t be “a Chassid a shoitah”); in the end, I’m embarrassed to say, he “somehow” convinced me to go for lekach again. Not only was it not my designated day, but it would be *a second time* – a double “transgression”!

Now just remember, I had gotten lekach from the Rebbe three whole days earlier. And, like everyone else, when I got lekach, I was in front of the Rebbe for only about one or two seconds. The Rebbe would wish the person שנה טובה ומתוקה (a good and sweet year) and the person would move on, as the Rebbe turned to the next in line. Furthermore, in the interim 3 days, the Rebbe had given lekach to thousands of other Chassidim.

Back to Erev Yom Kippur. I finally ended up approaching the Rebbe’s door. What happened

next was shocking. As soon as the person in front of me received his lekach and moved on, and at the very instant that the Rebbe turned to me, he immediately gave me a quizzical look and gesture of his hand (open, palm upward), as if to say, “what are you doing here now, and/or again!?”. Even if someone could possibly recognize and remember someone from 2 seconds, 3 days ago, among many thousands of others, mostly all with beards and the same black hats and jackets, this was too fast to be based on natural powers alone. At the very instant that the Rebbe turned to me, he gestured. As the leader of the generation, he is connected to all of our souls. Obviously, he knew that this soul had already received lekach this year and could “see” it immediately. [Even if, theoretically, the Rebbe, due to his exceptional genius of historic proportions, was able to simply remember every physical face he ever saw, even for 2 seconds among thousands of other faces; nevertheless, his extreme sensitivity and attention to every single soul would still be amazing and uniquely empowering.]

Obviously, when it comes to the Rebbe, there is no hiding. But the truth also was that I really, really wanted to have that mini yechidus and get lekach on my birthday, and felt that the Rebbe would be “lenient”. So, despite being embarrassed due to the “complications”; I leaned over to the Rebbe and “explained” in a whisper (like a child asking to please be forgiven for the part which was wrong, but be granted his sincere request): “רבי, היינט איז מיין יום הולדת” (Rebbe, today is my birthday), confident that at least my true intentions were equally not hidden from the Navi Hador (the prophet of our generation).

What did the Rebbe do? He just turned around to the supply box of honey cake next to him and was rummaging around there for a few seconds (an eternity under the circumstances). Finally, he turned back around to me, and in his hand was the largest piece of lekach I had ever seen. With the world’s biggest and warmest smile, he emphatically pressed the piece of cake into my waiting hand, while saying with gusto the birthday blessing: “שנת הצלחה!” – You should have a successful year!