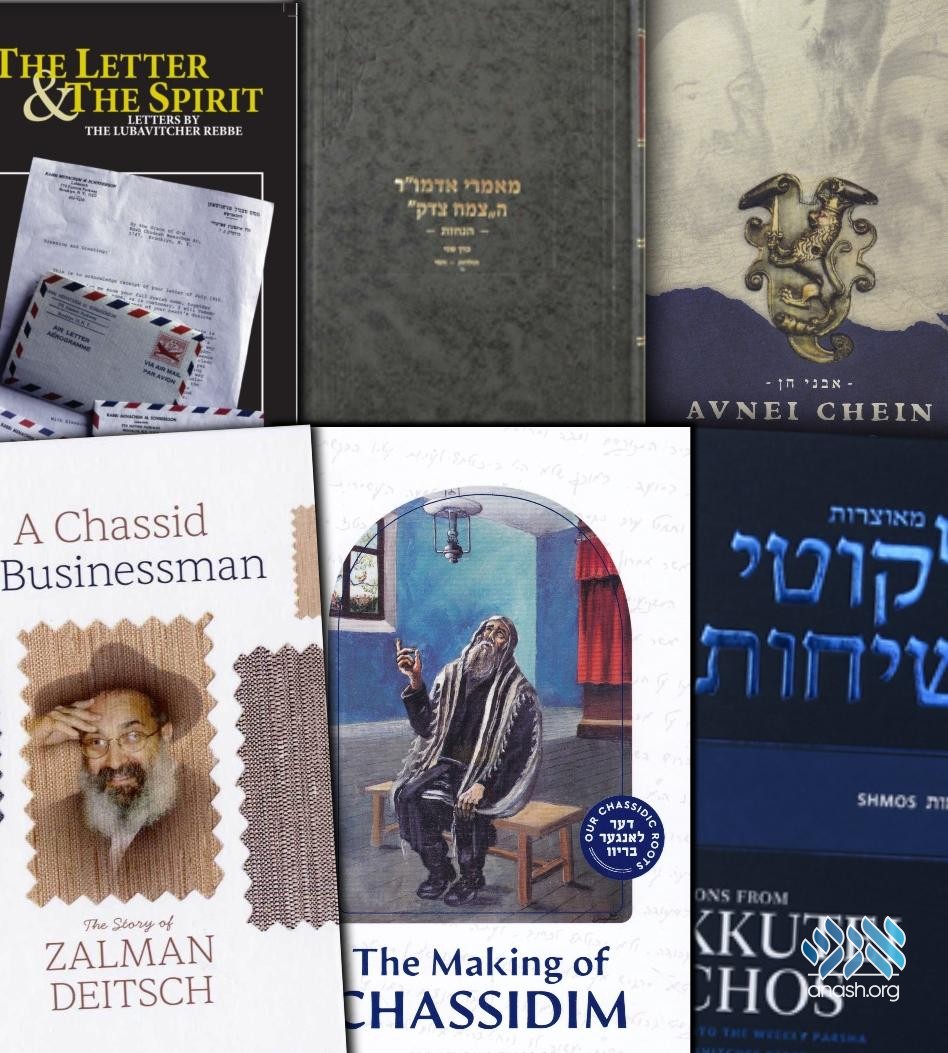 The Jewish book market has been very active since Tishrei, with numerous new seforim and books coming out, in various languages and styles. Anash.org presents a roundup of the seforim that are the hot topic in bookstores these days.

The Jewish book market has been very active since Tishrei, with numerous new seforim and books coming out, in various languages and styles. Anash.org presents a roundup of the seforim that are the hot topic in bookstores these days.

A Chassid, A Businessman

A new biography by Dovid Zaklikowski takes a look at the life of Zalman Deitsch, a name familiar to many in the Crown Heights community as well as to shluchim around the world for his philanthropy and activisim.

Reb Zalman was a chossid of the Rebbe with all his heart and dedicated as much time as possible to learning Torah, while at the same time being a successful businessman who ran a large textile company. He was also involved in mivtzoim, while always finding time to be a father, brother, and uncle.

How did he do all of this? This new book tells us how.
Stay tuned for a full review on the book

The Making of Chassidim

Many of us grew up hearing stories from “Der Lange Briv”, the over-100-page letter from the Frierdiker Rebbe to his daughter, Rebbetzin Chaya Mushka describing the early days of the Chassidic movement and the students of the Ba’al Shem Tov.

Whether it was told over by a teacher, related by a parent by a Shabbos table, studied in the original Yiddish, or read in the English translation published as ‘The Making of Chassidim’ by Sichos In English, the voluminous letter is considered a must-read for Lubavitcher children, bochurim and adults alike.

Just ahead of the ‘chassidishe month’ of Kislev, SIE reprinted the timeless classic, giving anyone the opportunity time to be inspired by reading the stories and lessons contained within.

The Tzemach Tzedek is known for the thousands of pages of Chassidus he wrote, which are printed today in tens of volumes including “Ohr Hatorah”, “Derech Mitzvosecha”, “Biurei Hazohar”, and others.

Amazingly, despite the numbers of seforim printed, there is still more that remains in manuscript. Recently, Kehos began producing a new set containing unpublished ma’amarim of the Tzemach Tzedek, many of which were transcribed by the Rebbe Maharash.

The new volume, second in the series, contains ma’amarim on the Parshios of Toldos to Vayechi. Footnotes, indexes and background information were prepared by Rabbi Gavriel Schapiro and Rabbi Eliyahu Matusof.

The Chein family is one that has a place of honor in the annals of Chabad history. Chassidim such as Reb Peretz Chein, a chossid of the Mitteler Rebbe, the Radatz, Reb Meir Simcha Chein, made the family name a respected one among generations of chassidim.

The book tells the story of the family dynasty through stories, documents, news clippings, letters by the Rebbeim and personal journals.

Unlike other biographies, the book does not focus on one particular individual, but rather contains a short synopsis of the life of each family member, giving a more general picture. The book also includes an appendix chronicling the roots of the family dating back 2500 years to Jewish life in Babylonia and Spain.

The Letter and the Spirit Vol. 5

In the Rebbe’s correspondence, one can find all types of letters. From the lengthy Torah discussions in the early volumes of Igros Kodesh, to the brief handwritten answers in Likkut Mainos, one can divide the responsa in to many “styles”.

Within the tens of thousands of letters, however, the Rebbe’s English letters stand out as unique. Prepared by Rabbi Nissan Mindel, the letters are more detailed, each a masterpiece clearly presenting the Rebbe’s view on the discussed topic. The letters can be understood and enjoyed by anyone, from a Chabad house regular to a seasoned chossid, and teach each of them something he did not know.

It is worth noting, that the books are prepared based on Rabbi Mindel’s archives, which only held the first draft of each letter. Frequently, the Rebbe would add, change or delete sections of Rabbi Mindel’s draft, and those changes are not reflected in the book.

Anyone who learned Likkutei Sichos can tell you that the Rebbe’s words revolutionizes the way one learns Torah, lives his life, and indeed his entire connection to the Eibishter. Now, those treasures are available in the original for English speakers as well.

Although we have only begun Breishis, the volume on Shmos just came out and is available, with ample time to receive the book in time to begin studying from it when we start Shmos.